While countries like Iran raise eyebrows for honestly declaring interest in developing nuclear energy by enriching uranium, which could also be used for developing weapons, Israel's covert and suspicious activities go largely ignored. 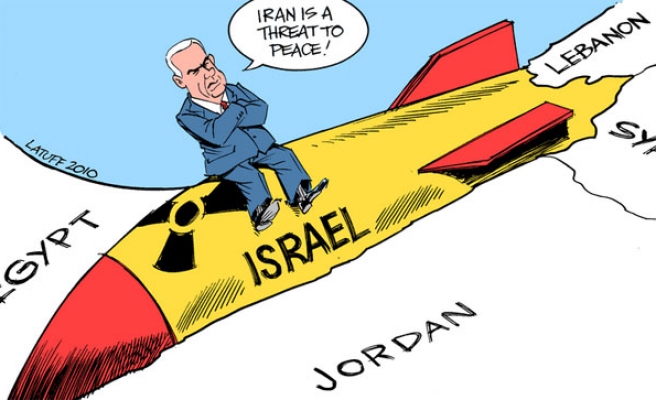 A special report in The Guardian newspaper on Wednesday highlighted the issue of nuclear weapons in the Middle-East.

However, unlike the usual rhetoric and accusations against Iran over alleged plans to enrich uranium which could potentially be used develop nuclear weapons in the future and threaten to wipe out human existence as we know it, this particular report focused on the very real threat posed by the actual presence of ready-to-launch nuclear missiles in the hands of a hostile state that has gone to war with and occupied the territory of its neighbors ever since its establishment in 1948 – Israel.

The report brought into the media spotlight very compelling evidence and proof that Israel possesses nuclear arms which it has developed from technology and materials either given by or stolen from allied states by a shadowy ring of secret agents known as ‘Lakam’.

Claiming that Israel is currently in possession of around 80 nuclear warheads, the report even states that Israel conducted nuclear missile tests 50 years ago. Not only did the international community not codemn the tests, but they worked arduously to keep the tests under wraps for decades afterwards.

Just like the rest of the world, Israel has been up until this day very tight-lipped regarding its nuclear arms program. The first indication that such a program existed came in 1986 when nuclear technician Mordechai Vanunu spoke of it to British press. Vanunu was later drugged in Italy and brought to Israel, where he was tried behind closed doors and sentenced to 18 years in prison.

The policy of neither confirming nor negating the existence of nuclear weapons in Israel is still to a certain extent in place today. Last month, Israeli Knesset parliament speaker Avraham Burg called the policy "outdated and childish." A right-wing group later called on police to investigate him for treason.

Speculation about Israel’s nuclear program began in the 1950s when France sent over a team of engineers to help Israel build a nuclear reactor in Dimona as part of a diplomatic deal with mutual benefits. They also built a secret reprocessing plant capable of separating plutonium from spent reactor fuel, which would enable the development of nuclear weapons. In 1959, Israel purchased 20 tons of deuterium oxide from Norway and the UK, which is also a key ingredient in making the weapon of mass destruction

Further suspicion was raised when Israel refused to accept International Atomic Energy Agency (IAEA) inspectors. Instead, they accepted US inspectors in the 1960s on the demand of then US President J.F. Kennedy. Inspectors noted that on every visit the building had newly plastered and painted walls in the building, suggesting that the Israelis were concealing their secret reprocessing plant.

It was also recently revealed that Israel bought 100 tons of uranium oxide from Argentina in 1963 or 1964 in an unmonitored manner. After France stopped supplying plutonium fuel for the Dimona nuclear reactor following the 1967 Arab-Israeli war, a Lakam operation resulted in 200 tons of uranium ore disappearing in the Mediterranean. Lakam agents are believed to have transferred the uranium ore, hidden in plumbat drums, to another vessel at sea while it was being transported from Antwerp to Genoa. With the help of German officials, Israel got away with it by making it look like a transaction between Germany and Italy. This event was later to be known as the Plumbat affair.

By then, CIA director Richard Helms had suggested that Israel was in possession of nuclear weapons and had arranged to start testing them. As Israel had not signed up to the 1968 Non-Proliferation of Nuclear Weapons Treaty, it could not be argued that they had violated any agreements.

Even more worryingly, Israel continued to increase its stock of uranium oxide in the 70s, purchasing 600 tons from South Africa’s apartheid regime in return for helping them develop their own nuclear arsenal. In 1979 even more confirmation that Israel possessed and was in fact testing nuclear weapons came when US satellite Vela 6911 recorded an explosion off the coast of South Africa that looked like a nuclear test.

Nuclear proliferation expert, Leonard Weiss, who was working on the case at the time, said "I was told it would create a very serious foreign policy issue for the US, if I said it was a test. Someone had let something off that US didn't want anyone to know about," referring to both the Carter and Reagan administrations.

It was later learned that the explosion in the Indian Ocean was part of a nuclear missile test agreement between Israel and the South African apartheid regime.

Nonetheless, Israel’s possession of nuclear weapons today is more or less clear, despite the silence of the international community. It could be argued that this is the reason why Egypt threatened to boycott the Non-Proliferation of Nuclear Weapons Treaty unless the Middle-East could be made a nuclear-free zone. Since no nuclear weapons were found in Iraq and Iran is still yet to develop an arsenal of their own, it’s difficult to see Egypt referring to any other state besides Israel.

This could also be the reason why the US successfully pushed for the cancellation of the last planned meeting in 2012, so that Israel would not be pressured to reveal its nuclear program.

In 2005, I met Vanunu and became a reporter after he told me that JFK tried to get Israel to open up the Dimona. LBJ sent 2 senators every year to 'inspect' but before they arrived the Israeli's would block up the elevators and stairwells so they only saw the top floor and not the 7 story underground WMD.LEARN MORE:https://www.causes.com/VANUNUwearewideawake.org

Navaid Aziz: The period of communicating with people only in the mosques has come to an end
Facebook
856.4B
Twitter
0
POOLAll Pools
PRAYER TIMES