Assad set to extend his power amid Syrian war and theatre

Candidate Assad's campaign is underway, with increasing appearances on television and two symbolic visits outside his central Damascus stronghold in the last two months. 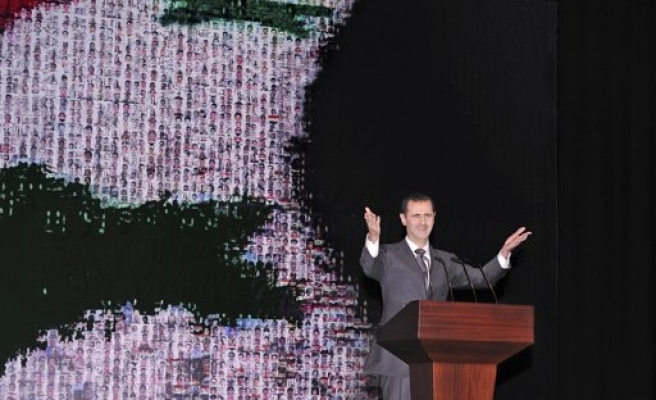 In the ornate, wood-panelled theatre that is Syria's parliament, an unusual ritual has played out this week.

It is part of an electoral process designed to portray all the drama of a presidential race, while ensuring nobody seriously challenges the one name on the ballot paper that counts: Candidate Assad.

Every day at around noon, sheaves of documents in super-sized envelopes have been delivered to Speaker Mohammad al-Lahham, who has solemnly unsealed them and read out the names of nominees for Syria's presidential election next month.

When the deadline for nominations closed on Thursday, 24 names had been announced to deputies. Twenty-three are largely unknown and, despite official efforts to portray the vote as a genuine race, are destined to remain so.

The name in the 24th envelope was "Dr Bashar Hafez al-Assad", the man who inherited power from his father 14 years ago. On Monday Assad declared that he will seek another term in the midst of a civil war which grew from protests against four decades of rule by his family.

Assad's defiance of opposition demands to step aside and pave the way for a peaceful political transition reflects his growing confidence that he has turned the tide of a conflict which has killed 150,000 people.

It has also provoked an angry response from his foes who say the June 3 vote will be a charade, designed to lend him a legitimacy they say he lost when he responded with force to the first wave of protests in March 2011.

Pointing to the upheaval caused by the conflict, they say it would be impossible to hold a credible vote in a country split between government and rebel-held areas, where 6 million people have been displaced and 2.5 million have fled abroad.

Authorities say people who left Syria illegally are barred from voting, meaning the majority of refugees will have no say.

A new law approved before the election also ensures that no dissenting voice will be offered to the voters. Syrians who spent time outside the country in the last 10 years are ineligible to stand, ruling out any of the opposition in exile.

In addition, the field of presidential hopefuls is likely to be trimmed to a maximum of three by another constitutional clause which requires each candidate to get the support of 35 members of the overwhelmingly pro-Assad parliament.

All week deputies have been casting secret ballots inside the speaker's parliamentary office, a ceremony which has been dutifully aired live on state television to highlight that due process is being seen to be followed.

ASSAD MAY HAVE NO CHALLENGER

But any suspense which that performance may have created was punctured this week by a parliamentarian from Assad's Baath Party, who said all 161 Baath deputies in the 250-seat parliament were backing the president. Without exception.

The MP, Jamal Qadiri, told Al-Watan newspaper that the remaining 89 deputies might throw their weight behind one or two other candidates whose names would go forward onto the ballot paper to challenge Assad.

The maths, however, suggest that any one of the remaining 23 nominees faces a struggle to attract 35 votes from a pool of just 89. This opens the possibility that next month's voting slip - as in Syrian elections of the last 40 years - will have only one name on it: Assad.

Unlike previous votes, this one is being held against a backdrop of daily carnage which may only increase as polling day approaches. A day after Assad declared his candidacy a twin car bombing in a government-held area of Homs killed 100 people, one of the deadliest attacks of the three-year conflict.

Nevertheless, Candidate Assad's campaign is underway, with increasing appearances on television and two symbolic visits outside his central Damascus stronghold in the last two months.

These have portrayed Assad as the man to re-unite and rebuild a fractured country, restore security and rehouse civilians after years of war, and protect its minorities from a radical Islamist enemy. TV has shown him meeting Christian monks, displaced families and orphaned children.

In March, the president inspected a shelter for displaced Syrians in the town of Adra, 20 km (12 miles) northeast of central Damascus, promising the government was working to help them and the army was fighting for them to return home.

On Easter Sunday he travelled further north to the ancient Christian town of Maaloula, recently recaptured from fighters of the Nusra Front.

After picking his way through the wreckage of a monastery damaged by weeks of fighting, the tall and soft-spoken president stood next to a black-robed priest and praised soldiers who he said had achieved something "unprecedented in the modern world".

"No people in the world have faced what Syria faces today. Your standing together, as citizens and soldiers to defend the country, is what achieved those victories, which will be recorded in military and political history."

"...We will remain steadfast and bring security back to Syria and defeat terrorism."

Not mentioned in his eulogy to the troops was the military support from Iran and Russia, and the Shi'ite Muslim fighters from Iraq and Lebanon's Hezbollah, who have pushed back the rebels from around Damascus and central Syria.

On Tuesday Assad and his wife Asma were shown on state television meeting families whose only sons died in the conflict. These men were volunteers as only sons are exempt from compulsory military service in Syria.

Like all good politicians running for office, Candidate Assad sat in front of the cameras with a photogenic young child perched on his lap.

His wife, a British-based banker before she went to Syria to marry him in 2001, was shown on Mother's Day in a slick video set to the haunting strains of Samuel Barber's Adagio for Strings, consoling mothers who lost children in the war.

Prominent actors and singers have given their names to a campaign on state television, titled "Your Voice is Your Freedom", urging all Syrians to vote.

"An election is the real meaning of freedom and this is how we practise it," actor Wael Sharaf said in one clip. "This is how I understand it and this is what every Syrian citizen who loves his country will do as well. I will vote."

While Assad's monopoly over state media and the absence of a serious rival puts the result of the vote beyond doubt before it is even held, the overwhelming support which he will receive on June 3 will not be entirely artificial.

For millions of Syrians from the country's Alawite, Shi'ite and Christian communities, Assad now represents the last defence against Sunni rebels who are blamed for killing minorities.

The Maaloula photo-opportunity, set against the ruins of an ancient monastery, played on those fears and may resonate well beyond Syria's minorities.

One Sunni Muslim from east Damascus who took part in anti-Assad protests before fleeing the country said he now reluctantly saw no alternative.

"If I trusted the Syrian intelligence forces were serious about not arresting or killing people I would have returned to the country, I would have even voted for him. I look at Syria and ask myself: what have we done to this country?" he said.