Behind Hagel's ouster, tensions over Syria and Obama's team

U.S. officials with knowledge of Hagel's relationship with the Obama administration described increasingly uneasy ties between Hagel's Pentagon and the White House - although not between the two men themselves. 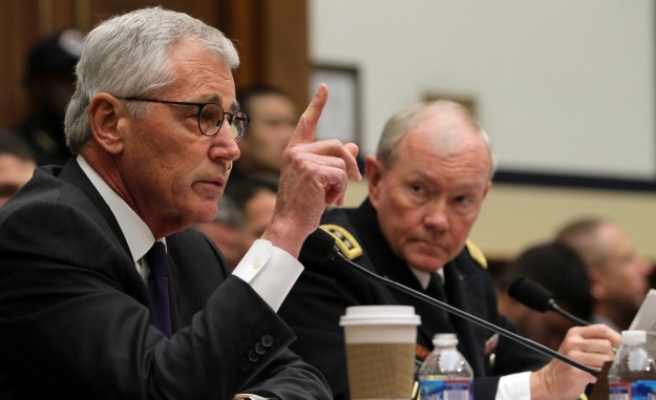 From the moment he was appointed last year, Defense Secretary Chuck Hagel had a troubled relationship with President Barack Obama's tight-knit White House national security team. As the bombing intensified in Iraq and Syria, so did his problems.

U.S. officials with knowledge of Hagel's relationship with the Obama administration described increasingly uneasy ties between Hagel's Pentagon and the White House - although not between the two men themselves.

While the White House portrayed Hagel's abrupt departure as a mutually agreed decision with Obama, the officials described a succession of worsening problems, including most recently Hagel's arguing for a more defined strategy to combat ISIL in Iraq and Syria in a leaked memo.

Knowledgeable officials said the defense secretary was, in essence, fired.

Removing Hagel allows Obama to bring in new blood as he faces multiple overseas challenges in his final two years in office, including the possibility of America's first woman defense secretary. Michele Flournoy, a former under secretary of defense, is front-runner to replace Hagel.

The officials, who spoke on condition of anonymity, said Hagel was frustrated with his inability to influence major questions of U.S. security strategy, including the fight against ISIL.

"My read is he was very unhappy about, as Gates and Panetta both expressed, the micro management from the White House, a small group of people making all these decisions," Senator John McCain, an Arizona Republican, told Reuters, referring to Obama's two previous defense chiefs.

"And I think also that he did not believe that we had a strategy to combat" ISIL, said McCain, incoming chairman of the Senate Armed Services Committee.

Another individual cited an example of the tight leash the administration kept on Hagel: a year ago, the defense secretary made a major speech at the Center for Strategic and International Studies, a leading Washington think tank. He was barred, apparently on White House orders, from taking questions from the audience afterward.

Obama and Hagel began having conversations in mid-October about the 68-year-old defense secretary's future, according to a senior administration official. Hagel initiated the conversation, the official added.

White House spokesman Josh Earnest, praising Hagel, said the task he had been brought in to do -- wind down the war in Afghanistan and oversee a shrinking Pentagon budget -- had shifted, as the threat from ISIL grew.

Even before his Democratic party was thrashed in the Nov. 4 midterm elections, Obama was under pressure to "reboot" his national security team as criticism mounted over the White House's response to ISIL, Russia's moves in Ukraine and other crises.

A senior administration official said Hagel did well in handling the drawdown of U.S. forces in Afghanistan and across-the-board spending cuts that Pentagon officials say threaten U.S. military readiness at a time of rising global challenges.

But as the crisis over ISIL in Iraq and Syria became a bigger priority, it grew clear to senior officials at the White House this was not his area of expertise, the official said. Perceived as weak on the Middle East and picked to do a different job, Hagel was seen as a weak link.

The decision to replace Hagel also followed a private, and critical, memo leaked last month in which the defense secretary wrote to Obama national security adviser Susan Rice and questioned the administration's strategy in Syria.

He argued that the United States needed to clarify its intentions toward Syrian President Bashar al-Assad. Obama had called on Assad to leave power more than three years ago, but this summer pivoted to focus on attacking ISIL militants who also are fighting Assad's government.

A congressional official, speaking on condition of anonymity, said Hagel also questioned Obama's policy of relying on air power alone in fighting ISIL in Iraq and Syria. Obama has ruled out the use of U.S. combat troops.

A senior Iraqi official who has known Hagel for years said, "He was not cautious. He wanted to do more in terms of fighting ISIS in Iraq and my sense is he disagreed with Obama on this."