Bosnian census should be watched closely

The current Bosnian census that opened on Tuesday October 1 and will be conducted until October 15 is crucial for all Bosnians, since one third of Bosnians are out of the country 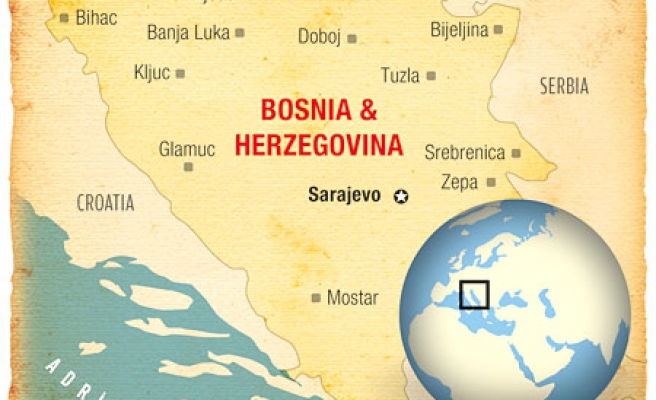 "The upcoming census in Bosnia and Herzegovina represents an important, and to some extent, critical milestone in recent Bosnia history,” Dr. Tarik Zaimovic, a professor at the Sarajevo University's Faculty of Economics, said in interview with the Anadolu Agency in New York.

The census is the first more the twenty years after the war in Bosnia and Herzegovina and in Bosnia as an independent country.

"Despite the overall political situation and institutional gridlock that we are facing, the downward economic spiral and rising unemployment, a number of NGOs are implementing a rather provocative and in some aspects an offensive campaign against Bosniaks, their culture and customs. Nevertheless, I am certain that Bosniaks will recognize their intentions and on the upcoming census unanimously express our national identity as Bosniaks and our language as Bosnian," Zaimovic told the AA, stressing that citizens have the ability "to freely express their own national identity as such."

Explaining that Bosnia had conducted censuses and documented while still under the Ottoman rule, Dr. Zaimovic emphasize that the historical prospective can help understand demographic and other trends and the way how Bosnia and Herzegovina suffered from wars and post-war prolonged conflicts that culminated in the last genocide of the 20th Century against Bosnian Muslims in the war from 1992 to 1995.

He said since the first official census done by the Austro-Hungarian occupation in 1879, the upcoming one in 2013 will be the thirteenth population census.

"From 1879 until the last census conducted in 1991 Bosnians were forced to use different and often externally 'imposed' ethnic/national and language names, among which is the decision by the Austro-Hungarian authorities in Bosnia and Herzegovina (BiH) which forbidden the use of name ‘Bosniak’."

In the context of the forthcoming census in 2013, Professor Zaimovic told the AA that it is important to point out that in 1948 census, special attention was devoted to the need that Bosniaks/Muslims "adequately identify themselves" and to be statistically aggregated within the appropriate national/ethnical group.

How Muslim population grew in Bosnia

Zaimovic also pointed out the example of 1953 census when the Manual for enumerators included: "… persons who do not closely identify themselves in terms of nationality…", are to be registered as "…Yugoslav-undecided…", whereas others are to be registered as "…nationally undecided….". The only language provided in this census was Serbo-Croatian and religious affiliation for Bosniaks was defined as "member of the Islamic religious community."

Professor Zaimovic adds that the census conducted in 1961 "represents the first time after 1910 that modality ‘Muslim’ -- was used with a significant extension in the modality formulation and the addition of the words, ‘ethnic affiliation’.”

Zaimovic also told the AA that the census from 1961 "is marked by the lowest official record of national/ethnic identification of Bosniaks, and with 25% of declared ‘Muslims’, this is the lowest statistical point for Bosniaks in history of Bosnia and Herzegovina."

The addition of "ethnic affiliation" was eliminated in the following census conducted in 1971 and, "after one hundred years Muslims/Bosniaks once again become a relative majority in Bosnia and Herzegovina with 39%," he said.

Zaimovic said, "Islamic affiliation" remained in the modality reserved for religious affiliation. He reminded that the census conducted in 1981 was "marked with a continuation of the same trend of national identification of Bosnian-Herzegovinian Muslims with an identical percentage of 39%."

Turning point before war in 1991

"The census conducted in 1991 was the turning point, and featured new and larger percentages of relative proportion of Muslims in the population of Bosnia and Herzegovina with 43%. But, in respect to the 1991 Population Census, it is important to highlight that in spite of the high percentages of the share of ‘Muslims’ in the total population, detailed analyses indicated that Muslims/Bosniaks are still characterized by the widest divergence in terms of their national identification,” Zaimovic said.

He points out that the analysis carried out by the Institute for Statistics of Republic of Bosnia and Herzegovina in 1993, showed “presence of over 70 different identification modalities when it comes to ethnicity/nationality diversities among BiH population, and with 22 different variations within Muslims/Bosniaks/Bosnians.”

"Despite the conclusions reached at the Second Bosniak Assembly in 1993, all post-war analyses indicate that the largest part of Bosniak/Muslim population is not aware of the need of uniform national identification. For example, the findings of the survey conducted in 2007 show that 55.7% of respondents chose the modality ‘Muslim’ and only 22.7% ‘Bosniaks’.”

He said, "similar data, with an added modality ‘Bosnian’, was collected and analyzed in a series of studies conducted by the United Nations, the European Commission and various NGOs. Although official analyses from pilot census conducted last year are not yet available, according to preliminary reports the same dispersion among Bosniaks is still present."

"Often we see people using more than one modality, for example - Bosniak-Bosnian, which results in the creation of new ethnic modalities and further dispersion in identification. Also, pilot results shown that the similar dilemma does not exist among Serb and Croats and according to the reports from the monitoring team, the Serbs and Croats are unanimously and clearly expressing their ethnic affiliation," Dr. Zaimovic said.

He went to explain, that in addition, in recent population censuses as well as in post-census implementation, "the national balance between Bosniaks/Serbs/Croats was more a matter of principle issue, and had only limited political implications."

However, Zaimovic said "after the war and as a part of BiH Constitution, and especially from 1999 onwards all laws in BiH entail an article ‘… in accordance with the last conducted census…’ which refers to both number and structure of ministers, managers and employees within the ministries, structure of governments, agencies and various institutions, local government bodies, etc. Namely, should the Census result in the division of the Bosniaks into Bosniaks/Muslims/Bosnians, as was the case in Montenegro where we have 8.65% of Bosniaks and 3.31% of Muslims, the entire governmental and institutional setup, as well as the forthcoming constitution-related negotiations and possible arrangements will follow fairly different path -- predominantly to the detriment of Bosniak population," Zaimovic said.

Zaimovic who is leading a special foundation to monitor the current census in Bosnia and Herzegovina, said his foundation has been "working relentlessly over the past year to both monitor, advice and secure that all methodological setup of the upcoming census is done in line with international practices and not to detriment of Bosniaks."

He said, "any kind of manipulation of census results -- like the issues of not consolidating different modalities of Bosnikas historical names under one statistical category, could have dire consequences for Bosnia and Herzegovina since ethnic relations, demographic trends and unprecedented misuse of both statistical date and historical context have led to horrific wars in ex-Yugoslavia."

Finally, Zaimovic said as a part of foundation's activities "organization of active participation of Bosniaks in all technical aspects of Census 2013 implementation," is part of their engagement.

Problems with the huge diaspora

But, Zaimovic mention the fact, that, "due to its size -- more then 30% of the prewar population is currently outside of Bosnia."

Diaspora and citizens who are expected to be outside of BiH during census are one of the main areas of the foundation's activities, he said.

"Having in mind that the US is a home of one of the largest Bosniak communities, over the past months we have tried to visit as much as we could cities and communities, and to inform our citizens about the upcoming census," Zaimovic said.

During his visit to America, Zaimovic noted, he was "focused on critical areas of education and public-information campaign."

"Some have come here [the US] as a consequence of war, others came to live and to stay, but also, many of our citizens are currently outside of Bosnia for purely economic reasons."

Zaimovic also noted that the international recommendation for population censuses require that these different categories are treated differently and should be enumerated separately.

He said talking in a "more particle terms all citizens which chose to participate in the 2013 census by filling the Web-form according article 40 paragraph 5 of the Law on Census in BiH in 2013, will be excluded from BiH residents and will be part of separated database."

Zaimovic explained, those citizens which decided to go to Bosnia from 01-15 of October to their prewar pace of resident "and opt to be enumerated in Bosnia will become part of BiH residents and will be part of all post-census socio-economics analyze."

He went to say that same applied if they are enumerated as members of their existing household in Bosnia and Herzegovina.

Finally, answering a question over main objections to this census, Zaimovic reminded that only political negotiations in drafting Law on Census in Bosnia took almost 4 years.

"There was a number of issues both in drafting a low but also in non-technical ‘compromises’ that where maid. From the beginning a number of different and difficult challenges emerged. We as the foundation tried to be a constructive part of the overall process and the assist all stakeholders in achieving best possible results. Despite our efforts, some issues have been addressed and ultimately ‘agreed on’ in rather an unprofessional and particular way. In the methodological sense we have the situation that questions that affect almost all the elements of BiH parliamentarian and governmental operations are the ones designed in such a complicated way that according to pilot-census, they created the most confusion with citizens. Also, we have a situation that Council of Ministers has adopted the ‘Conclusion’ that one of the most important aspects of any census -- the methodology for data aggregation on higher levels, is to be decided after the census is completed," Zaimovic said.

He concluded that this "of course creates tremendous space for census results manipulation and unprincipled political agreements and concession."