The two sides have been wrangling over what it means to have "one country, two systems" for the past 30 years - China stressing "one country" and democrats in the former British colony the "two systems 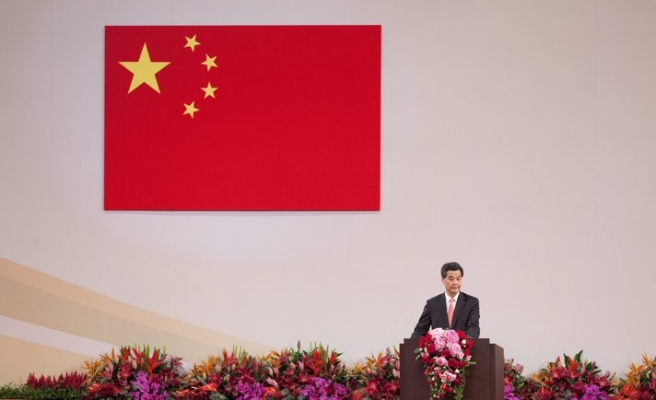 Just days before China was set to deliver its edict on electoral reform in Hong Kong, Beijing's most senior official in the city held a rare meeting with several local lawmakers whose determined push for full democracy had incensed Beijing's Communist leaders.

The setting at the Aug. 19 meeting was calm: A room with plush cream carpets, Chinese ink brush landscape paintings and a vase of purple orchids. The political mood outside, however, was fraught. Democratic protesters were threatening to shut down the global financial hub with an "Occupy Central" sit-in if Beijing refused to allow the city to freely elect its next leader.

After the formal smiles and handshakes with Zhang Xiaoming, the head of China's Liaison Office in Hong Kong, the mood soured. Pro-democracy lawmaker Leung Yiu-chung asked Zhang whether Beijing would allow any democrat to run for the city's highest office.

Zhang, 51, dressed in a black suit and a navy blue striped tie, delivered a blunt response. "The fact that you are allowed to stay alive, already shows the country's inclusiveness," he answered, according to two people in the room who declined to be named. Zhang's office did not respond to several faxed requests for comment.

Zhang's remarks stripped away any pretence China could find common ground with Hong Kong's democracy camp. The two sides have been wrangling over what it means to have "one country, two systems" for the past 30 years - China stressing "one country" and democrats in the former British colony the "two systems".

For Beijing, Western-style democracy conjures up visions of "colour revolutions" and the "Arab Spring", of chaos and instability that could pose a mortal threat to the ruling Communist Party. For many Hong Kong residents, free elections means preserving the British-instituted rule of law, accountability of leaders, and multi-party politics as a check on government powers.

At the Aug. 19 meeting, Zhang said Beijing had been generous even allowing democrats such as Leung to run for legislative seats. He insisted that the next leader had to be a "patriot".

"We were shocked," said one person who attended the meeting. "But Zhang Xiaoming is only an agent who delivered the stance of the central government without trying to polish it."

Few were surprised, though, when China's highest lawmaking body, the Standing Committee of the National People's Congress (NPCSC), announced an electoral package on Aug. 31 that said any candidate for Hong Kong's chief executive in the 2017 election had to first get majority support from a 1,200-person nominating panel - likely to be stacked with pro-Beijing loyalists.

Democrats say the decision spelled out China's bottom line on political reform: A direct vote will be allowed, but only if Beijing vets the candidates.

Yet the pro-democracy movement is vowing to press on with its campaign of civil disobedience. It is threatening to lock down Hong Kong's main business district with sit-ins in October, protesting what they call "fake" Chinese-style democracy. Students plan to boycott university classes later this month. And the city's 27 pro-democracy lawmakers have threatened to block Beijing's 2017 electoral package in the legislature, where they hold nearly one-third of the seats - enough to veto the law and block future government policies.

As a colonial power, Britain appointed Hong Kong's governors and never encouraged democratic development for almost all of the 156 years it ruled the colony. It was only when Britain and China broadly agreed on how to hand over the colony to China, beginning with a "Joint Declaration" in 1984, that a blueprint for democracy was envisioned. It led to the signing of the "Basic Law" in 1990, which said the city could keep its wide-ranging freedoms and autonomy, and for the first time stated universal suffrage as "the ultimate aim", while ensuring China still had ample levers to ensure its influence over the city. (See Factbox

"He said many things. But one of them was if 50 years should prove not enough for you, you can have another 50 years," Lee said, referring to China's pledge not to change anything in Hong Kong until 2047.

China's 1989 crackdown on the protests around Tiananmen Square was a watershed for both sides on how democracy might evolve. After mass demonstrations erupted in Beijing, new democratic groups sprouted up in Hong Kong. China began to see Hong Kong as a potential national security threat.

"When Deng formulated 'one country, two systems', I suppose he didn't anticipate there would be the June 4 massacre which caused Hong Kong people so much anger against the Communists," Lee said in his law office, which contains a bronze bust of Winston Churchill and a picture of a June 4 candle-light vigil in the city. "He thought he could win us over."

Fear and anxiety mounted instead. The years leading up to the actual handover of the city to Beijing in 1997 saw a wave of people and businesses emigrating abroad, fearful of the imminent handover to China.

Chinese officials rankle at current-day comparisons to British rule, pointing out that Britain never brought democracy to Hong Kong during a century and a half of colonial rule. ``Hong Kong people did not stand up to demand democracy," said a person with ties to the leadership in Beijing. "This is a big improvement compared with the British. Still, some people do not see it as the glass half full, but half empty."

Any criticism of China's handling of Hong Kong by countries like Britain and the United States also draws claims of foreign intervention from Beijing. China, ever mindful of how it was carved up in the 19th century by foreign powers, fears the democracy movement in Hong Kong could precipitate another break-up, said a source in Beijing close to the Chinese leadership.

"When there is chaos in Hong Kong, they will push for Hong Kong to become independent," said a second source with leadership ties, referring to meddling by "black hands," or foreign agents. These forces "want to influence the mainland to become a democracy and be dismembered like the Soviet Union."

In the years after 1997, Beijing seemed content to stay at arm's length from Hong Kong. Former president Jiang Zemin made reunification with Taiwan a top priority and so it was important for China that the "one country, two systems" formula was seen as successful.

Beijing also hoped that people in Hong Kong would slowly begin to identify with the Chinese nation over time, especially younger generations schooled under a post-colonial system.

But a series of opinion polls taken every six months since the 1997 handover tells a different story. The number of respondents in the University of Hong Kong survey expressing confidence in China's future has fallen steadily from 75 percent in 1997 to 50 percent in June. Moreover, the survey showed the younger the respondent, the less proud they were of becoming a Chinese national citizen.

China's current unbending line on Hong Kong also has to do with its emergence as a power on the world stage and is in line with a more assertive posture adopted by President Xi Jinping. When Jiang negotiated the territory's future in 1997, China's gross domestic product was US$0.95 trillion (7.9 trillion yuan). Today it is US$9.4 trillion, making it the world's second-biggest economy.

"(Beijing) was poor, tolerant and made concessions then to (try to) win the hearts of Hong Kong people," said the first source with ties to the leadership, referring to China's more conciliatory approach under Deng and his successors.

It may also have to do with internal Chinese politics. Xi's uncompromising line on Hong Kong may be an effort to protect his flank as he pushes ahead with economic reforms and a far-reaching anti-corruption campaign that has targeted powerful figures in the Communist Party.

"China needs to draw lessons from the achievements of foreign politics, but the foundations of our system should absolutely not be given up," Xi said in a September 5 speech in Beijing.

"The Occupy Central with Love and Peace" movement coalesced in January 2013 after Benny Tai, a law professor at the University of Hong Kong, wrote a newspaper column proposing a Gandhi-like civil disobedience movement - an escalation from the usual marches and candlelight vigils - to press for universal suffrage.

The movement got an indication of Beijing's bottom line on democratic reform in June when the Chinese government issued a "White Paper" that reminded Hong Kong residents that it wields supreme authority in the city. Hong Kong administrators, including judges, had to "love the country" as a basic requirement to hold office, it said.

Undeterred, the Occupy movement organised an unofficial referendum on universal suffrage at the end of June that drew 800,000 ballots calling for free elections. Then, on July 1, nearly half a million protesters marched to the financial district. Over 500 were arrested after activists staged an overnight sit-in.

That sparked consternation in Beijing. It was a reminder of a mass protest in 2003 when half a million people poured onto the streets of Hong Kong to protest an anti-subversion bill by the territory's legislature - the biggest anti-government protest on Chinese soil since the demonstrations in Tiananmen Square.

"When they saw the Democrats attending these rallies, they just drew the line and treated us as enemies," said Martin Lee.

Pro-Beijing groups countered in August with a mass demonstration of their own at which they warned of public disorder and the perils of antagonising China.

Jasper Tsang, one of the founders of the pro-Beijing Democratic Alliance for the Betterment and Progress of Hong Kong, the city's largest political party, said China's leaders never promised full democracy.

"I would think if the Basic Law were written in the last five years, it would be very likely that we would leave out the words 'universal suffrage'", Tsang said.

BETWEEN FATHER AND SON

Protest-leader Benny Tai counsels patience. He says a time will come when China is truly ready for political reform. When it does, "Hong Kong naturally will be chosen as the experimental ground for democratic reform in mainland China," he says. "I still have confidence in the long run. We may be able to win the war, even if we lose this battle."

The view in Beijing is less accommodating.

"The mainland has been too nice to Hong Kong," said the first source with leadership ties. "The relationship between the centre and Hong Kong is not one between brothers, but between father and son. The son has to listen to the father."