U.S. officials fear the new Chinese-led institutions will lend to projects that are unable to secure financing from other multilateral institutions, rendering the conditionality ineffective. 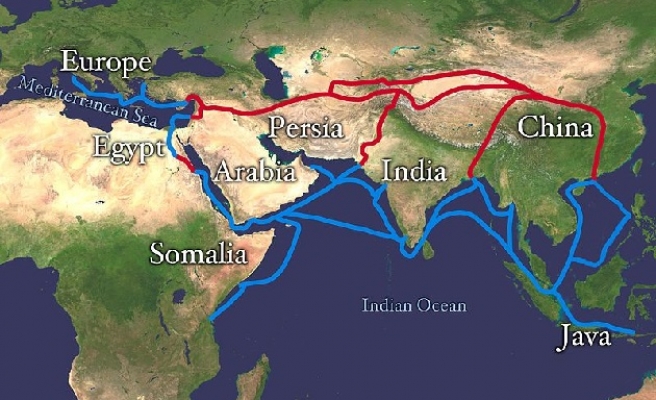 "The Silk Road, no longer just a concept in history books, has evolved into a story of modern logistics and Sino-European cooperation," Yang Jiechi, China's top diplomat, told a conference this month.

The New Silk Road Economic Belt - from China across Central Asia and Russia to Europe - and the 21st Century Maritime Silk Road - through the Malacca Strait to India, the Middle East and East Africa - have become the centrepiece of China's economic diplomacy.

The belt and the road, as China's diplomats refer to them, are the focus of the Asia-Pacific Economic Cooperation (APEC) summit in Beijing. They aim to cement China's emerging role at the heart of the 21st century economy.

China's President Xi Jinping has pledged $40 billion to a new Silk Road fund for investing in infrastructure, resources and industrial and financial cooperation across Asia.

Chinese diplomats have also been busy promoting a new Asian Infrastructure Investment Bank, promising to provide half of its $50 billion start-up capital, to help build ports, roads, power projects and other desperately needed infrastructure across the region.

The Silk Road fund and Asia Infrastructure Investment Bank pose a direct challenge to the traditional primacy of U.S.-dominated financial and trade institutions in the region, including the International Monetary Fund, World Bank and Asian Development Bank, all of which were set up following the U.S. victory in World War Two.

U.S. diplomats have been manoeuvring furiously to limit the impact of China's economic diplomacy. In the past month, Australia and South Korea both declined to join the new Infrastructure Investment Bank following intense lobbying from officials in Washington, which went all the way up to Secretary of State John Kerry and President Barack Obama himself.

Officially, U.S. diplomats are concerned about governance standards at the new institutions. There are fears about the large share of the voting rights that will go to China and the willingness of the new institutions to lend for projects that do not meet the social and environmental criteria currently employed by multilateral development banks.

Under intense pressure from the United States, the World Bank and Asian Development Bank will no longer finance coal-fired power stations due to concerns about climate change. But many countries, including India, have indicated they intend to continue building coal-fired plants to bring electricity to millions of homes that are currently without secure and affordable access to modern energy.

U.S. officials fear the new Chinese-led institutions will lend to projects that are unable to secure financing from other multilateral institutions, rendering the conditionality ineffective.

But there is a deeper, unspoken fear that the new institutions will be used to enhance China's leadership at the expense of the United States and its traditional allies in Asia including Japan, South Korea and Australia.

In the run-up to the APEC summit, U.S. diplomats have sought to keep the focus on the Trans-Pacific Partnership, a proposed U.S.-led regional trade deal, rather than the broader Free Trade Area of the Asia Pacific, promoted by China.

It is part of a mounting economic, political and military competition between the United States and China across the region.

Asia-Pacific is not the only area where the post-war economic and financial leadership of the United States and its network of allies is being challenged.

The U.S. pivot to Asia is being matched by a similar move on the part of Russia, which has sought to reduce its dependence on the United States and Europe by upgrading its economic ties with China. In the past six months, Russia has signed two major deals to supply natural gas to China, which has become Russia's most important trading partner.

In July 2014, China, Russia, India and Brazil reached agreement on a $100 billion New Development Bank to be headquartered in Shanghai. China and Russia have also been busy promoting economic and military ties across Central Asia through the Shanghai Cooperation Organisation.

The major financial and economic institutions, which experts sometimes call the "international financial architecture", no longer correspond to the balance of power and the shifting centre of gravity in the world economy.

The International Monetary Fund, World Bank and regional development banks are all dominated by the United States and its allies in terms of voting rights, capital structure, headquarters location and staffing.

Efforts to reform them to give a greater role to China and the other fast-growing developing economies have largely proved unfruitful.

The multilateral lending institutions are severely undercapitalised and have nowhere near enough resources to meet the enormous infrastructure needs across Asia, Africa and Latin America.

The result is that many multilateral institutions appear to be outdated, too small and entrenched in colonialist approaches to development.

There is still an assumption that economies of developing countries are defined by their relationship with their more developed counterparts. But that world has vanished over the last decade.

Countries in Asia sent more than 60 percent of their exports to other nations in Asia and to Africa and the Middle East, compared with just over 15 percent each to North America and Europe.

As the world's greatest export powerhouse, China has accumulated vast foreign exchange reserves and is now becoming a major supplier of capital.

Prior to the financial crisis, that capital was tied up passively and uselessly in U.S. Treasury bonds. Now China wants to use its capital more productively to invest in infrastructure in its major trading partners and at the same time buy more economic and political influence.

There is nothing new in the idea that countries seek to turn financial capital into political power. Britain pursued the same approach in the 19h century, and the United States has done so successfully since World War Two.

Market access and capital can all be traded for various forms of influence. The Marshall Plan traded U.S. economic assistance in European reconstruction for a pro-American orientation in European foreign policy.

As the balance of power within the global economy shifts, it is inevitable that the international economic architecture will have to evolve.

Some western foreign policy specialists have naively assumed that emerging markets would become integrated into existing post-war, western-dominated structures of power and governance.

But it was always at least as likely that those institutions would have to adapt and change to accommodate the rising economic and financial power of emerging markets.

Just as access to American markets and capital was once a key component of U.S. diplomacy, China is now employing its financial and trade muscle to win friends and influence.