Millions of Congolese are estimated to have died and the country was decimated between 1885 and 1908 after King Leopold II declared Congo his personal property. 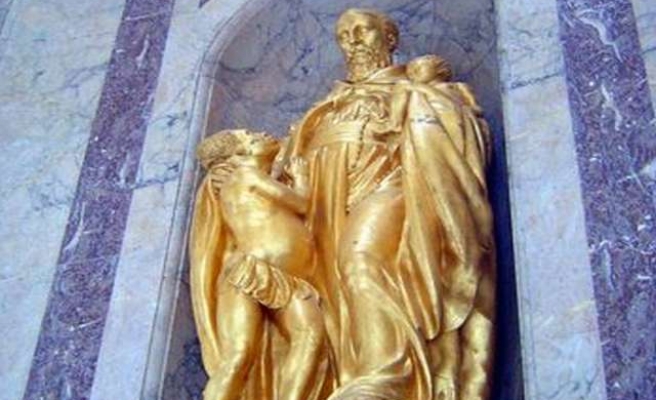 At the entrance to Belgium's Museum for Central Africa stands a giant golden statue of a European missionary with an African boy clutching his robes, along with a plaque that reads: "Belgium brings civilisation to Congo".

The statue and some of the exhibits inside anger many visitors for the way they portray African people and Belgium's brutal colonial past.

Now Belgium wants to change that, at least a little. It is spending 66 million euro ($90 million) to modernise the museum, set in rolling gardens outside Brussels, and put a new face on the colonial experience.

But the golden missionary will stay, as will many other symbols of local 'savages', including a statue of the 'leopard man', a native wearing a mask poised to attack his sleeping victim. The decisions about what to keep raise questions about the extent to which Belgium is facing up to its past even now, more than five decades since Congo won its independence.

"We will be very critical, but what we want to do is provide the elements to the visitor so that he can make up his own mind. There are a lot of good things that happened too.

"What was realised in terms of infrastructure, roads, airports, ports, education, health facilities, research, is really quite incredible," he said.

Some people reject that position outright. Belgium left just a few dozen Congolese university graduates and an economy built chiefly to supply Belgium with raw materials. Even today, there is just 2,000 km (1,250 miles) of paved road in a nation the size of Western Europe.

Millions of Congolese are estimated to have died and the country was decimated between 1885 and 1908 after King Leopold II declared Congo his personal property.

The king's troops were ordered to collect the hands of victims, often shot for resisting slave labour, to prove they had not wasted bullets. Leopold even imported Congolese for a human zoo to show life in the country he never visited. Some died of influenza and are buried near the museum.

Adam Hochschild, author of "King Leopold's Ghost", an acclaimed 1998 book that describes Leopold's unrestrained plunder of Congo, told Reuters he has been surprised at many Belgians' ignorance of what happened in colonial times.

"When I was researching "King Leopold's Ghost" ... I did find many Belgians who were extremely aware of the brutal side of colonial rule," he said. "But there was a much larger number of people who found the story something totally unknown."

Belgium may not be the power it once was, but its people are among the richest Europeans. Much of that prosperity can be traced to the colonial past, when the country stood among the globe's most successful trading economies.

Over the first six decades of the 20th century, ivory, rubber, copper and diamonds all flowed from Africa to Belgium. The royal family's wealth is reflected in its sprawling palace, extended by Leopold and modelled on Versailles.

Unsurprisingly, the museum's collection - from human corpses to stuffed elephants to the uranium used for the Hiroshima nuclear bomb - tells the story of Belgium as much as Congo, now Democratic Republic of Congo.

"Until 1960, thanks to Congo, Belgium was one of the most powerful states in the world," said Gryseels.

"The colonial period is when Belgium was one of the superpowers. A lot of people feel nostalgic about the good old days."

Joseph Ibongo, director of the Congolese National Museum in Kinshasa, said the poor state of his own museum, with an inventory roughly one tenth the size of that in Brussels, shows that the crimes of the period remain unresolved, however.

"We are still able to see what really happened here, the brutality of the colonial administration," he said.

"People had their hands cut off - can we honestly say these were the 'good old days'? I don't think so."

In the more than half-century that Belgium ran Congo from 1908 to 1960, hundreds of thousands of Belgians worked there in everything from business to colonial administration.

Although links with Africa as a whole remain strong, with more than 700,000 air passengers travelling between Brussels and the continent last year, exports from Congo were little more than 280 million euros.

"Congo is a very emotional topic here in Belgium. There is not a single Belgian family that did not have a family member that worked in Congo," Gryseels said.

Many Belgians resent the criticism of their colonial past although few are prepared to say so in public.

One senior Belgian diplomat reflected the views of many of his compatriots when he said he believed the controversy was being stirred up by the old colonial powers - notably Britain - to taint their smaller neighbour's colonial success.

"There is a lot of jealousy in England about Belgium's success in Congo," he told Reuters, asking not to be named.

Belgian Ludo De Witte, the author of a book that exposed Belgian complicity in the murder of Patrice Lumumba, who helped win Congo's independence, said it is an issue that Belgium's political and business elite would rather sweep under the rug.

"If the Belgian elite represent something, it's because of the role of Belgium in central Africa," he said.

"They want to keep it that way. They are still hoping for (global) influence, also economic, when conditions are ok. That's why they prefer not to touch these difficult issues."

Museum director Gryseels said the revamped museum will place the exhibits in a fresh "context".

"It's walking a tightrope and you've got to go step by step," he said. "Don't offend them too quickly with too much criticism that everything was bad."