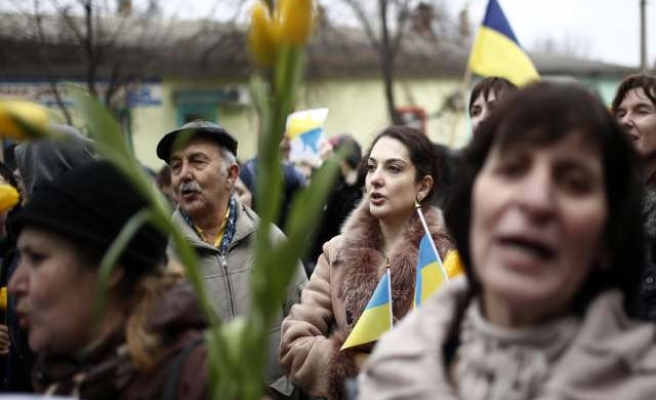 Crimea's status is one of the hottest topics on the international agenda in the wake of the four month political crisis in Ukraine which saw the flight of pro-Russian ex-President Viktor Yanukovych.

Crimea’s parliament voted last Thursday in favor of joining Russia, and calls for a referendum on the region’s future with Ukraine on March 16. Its decision comes as Russian armed forces continue to maintain their presence on the peninsula.

Crimea has been under the control of many states during its history including the Huns, Khazars and the Byzantine Empire during the early and Middle Ages until it was conquered by the Ottoman Empire in 1475.

Crimea was first given independence in 1774 with the Treaty of Kucuk Kaynarca between the Ottoman Empire and Russia, and then occupied by the Russians in 1783. Following Russia's occupation, the Turkish population in the city was forced to migrate and left for Turkey, Romania and Bulgaria.

Expulsion of Crimean Tatars under Stalin

The Crimean Soviet Socialist Republic was created in November 1921 following the 1917 Russian Revolution. Germany occupied Crimea in 1941 during the Second World War and Russian Soviet Republic took it back in 1944, but not without deporting some 300,000 Crimean Tatars (a Turkic ethnic group), in the territory upon collaborating with Germans during the world war.

Integration with Ukraine in Khrushchev era

In 1954 Crimea was transferred to the Ukrainian Soviet Socialist Republic by the USSR as a “gift” by the then Soviet Russian leader, Nikita Khrushchev.

After a referendum in January 1991, the Crimean Soviet Socialist Republic was re-declared and the Ukrainian Soviet Republic decided on the establishment of Crimea Autonomous Region the same year to prevent Crimea passing under Russian control once again.

The Mejlis (central executive body) of the Crimean Tatar People gathered in June 1991 in Crimea's capital and administrative center, Simferopol, under the leadership of human rights activist Mustafa Abdulcemil Kirimoglu.

The parliamentary seats in the Crimean Republic were raised from 80 to 98 in 1991. 14 seats were given to Crimean Tatars, while Greeks, Armenians, Germans and Bulgarians were given one seat each.

Upon the decision to hold referendum to vote on the independence of Crimea, Ukrainian authorities abolished the Crimean constitution and presidency in March 1995. This was the first harsh reaction by Ukraine over pro-Russians in Crimea after the dissolution of the Soviet Republic.

The vast majority of the Crimean Autonomous Republic's parliament, now under de-facto Russian control, comprise of ethnic Russians and Russian speakers, which make up 60 percent of the total Crimean population. Armed groups which later turned out to be Russian soldiers seized the parliamentary building on February 27, and after that, parliamentary sessions began to discuss Crimea's future. The Crimean parliament also elected a pro-Russian parliamentary speaker and prime minister unilaterally. However, referendum and elections in the region requires the Ukrainian government’s approval. The Ukrainian government emphasizes that all decisions taken after February 27 in the Crimean parliament are unilateral and illegal.

A UN peace mission should be urgently deployed to prevent bloodshed in Crimea, demands the Mejlis of Crimean Tatars.

The plea comes after the pro-Russian groups occupied the Crimean parliament who voted for integration with Russia last Thursday. The Crimean parliament’s decision to join Russia is deemed one that is taken “under pressure from militias and in open violation of international law and the Ukrainian constitution” a statement from the Mejlis (executive body) of Crimean Tatars stated.