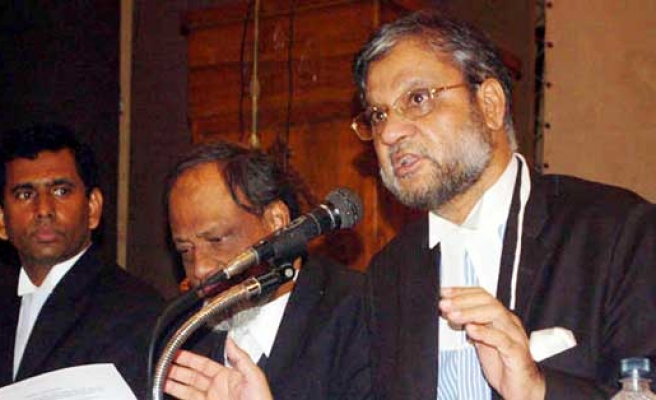 Speaking to AA in an exclusive, Abdur Razzak, also the attorney of the Jamaat-e-Islami Party stated that the Tribunal had been criticized by the international community and Bangladeshi people since the onset of the trial for not complying with international rules of law.

"National unity is required for war crimes to go to trial at a court in that country. However, there is a serious dissensus among Bangladeshi people," he stressed.

Last week, the Bangladeshi court sentenced the 90-year-old former leader of Jamaat-e-Islami Party Ghulam Azam to 90 years in prison and the 65-year-old Secretary General of the party Ali Ahsan Mohammad Mujahid to death for masterminding the atrocities during 1971 Bangladeshi War of Independence against Pakistan.

Ghulam Azam, held for "superior responsibility" and compared by prosecutors to Nazi leader Adolf Hitler, was found guilty of five charges of planning, conspiracy, incitement, complicity, and murder during the bloody war, which the government announced killed three million people.

Justice Anwarul Haque noted in his verdict that the atrocity in 1971 is an undeniable massive genocide in the then East Pakistan, saying "This massacre can only be compared to the slaughter by Nazis under the leadership of Adolf Hitler."

Jamaat-e-Islami, part of the opposition alliance headed by the Bangladesh Nationalist Party, reasoned that the war crimes tribunal is politically motivated to target its top leaders despite huge support from Bangladeshis to bring justice for the crimes committed more than 40 years ago.

Prosecutors had sought the death penalty for Azam, describing him as a "lighthouse" and the "architect" of the militias but he was spared the death penalty because of his age and health, and was instead sentenced to nine decades in prison.

Three of the five Islamists convicted by the tribunal have been sentenced to death, and one was given life imprisonment.

"The death penalties will turn in favor of Jamaat-e-Islami in the long run," he stressed.

The conviction of Ghulam Azam might contribute to close a bloody chapter in Bangladeshi history, but it exposes a deep divide in this largely Muslim nation of 160 million people.

Jamaat-e-Islami Party of Azam, the fifth person convicted by the controversial international crimes tribunal, called for a general strike over the court's verdict.

The court's verdict for Azam as well as the previous verdicts by the tribunal have sparked widespread and deadly violence on the streets of the country that has a 90 per cent Muslim population killing at least 7 people.

Before and after the judgment, supporters of Azam clashed with police and paramilitary troops who responded with rubber bullets and in some cases live rounds.

The ICT was set up in 2010 by the Awami League-led government to try the people accused of crimes such as routine acts of mass murder, rape and arson during the nine-month war that killed hundreds of thousands of people.

Unlike other war crimes courts, the Bangladeshi tribunal is not endorsed by the United Nations. The New York-based Human Rights Watch group has said its procedures fall short of international standards.

The government maintains the trials are needed to heal the wounds of the 1971 war in which it says three million died. Independent estimates put the death toll at between 300 thousand and 500 thousand.

The next parliamentary elections are just six months away to be held by 15 January, 2014, whose outcome will affect the court's verdicts and help determine whether Bangladesh can retain its secular outlook.