Hundreds of fans halted the İstanbul derby between Galatasaray and Beşiktaş after storming the pitch at İstanbul's Olympic Stadium on Sunday. 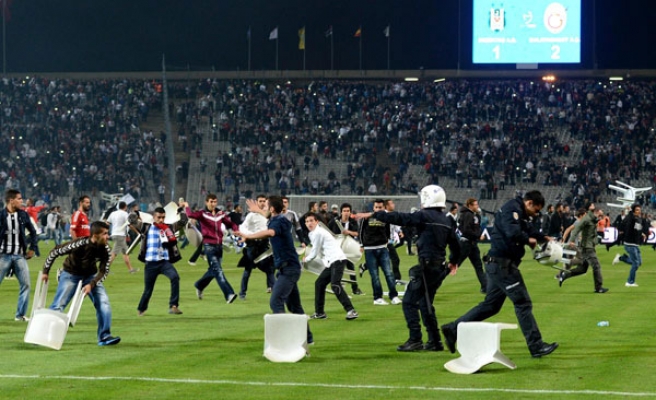 Sixty-seven people were detained on Sunday night as a result of violence that broke out in a derby game between Beşiktaş and Galatasaray at Atatürk Olympiad Stadium, in what is seen as the latest in a series of events indicating that football will be a major new arena for the playing out of political antagonisms between social groups. Beşiktaş fans invaded the pitch in the 92nd minute of the game, causing it to be delayed indefinitely; this was seconds after the referee had given a red card to Galatasaray player Felipe Melo, who taunted Beşiktaş fans in front of the bleachers, thus provoking their invasion.

Of the 67 detained, 12 were minors. All suspects were released following interrogation at Başakşehir Police Department, but they were each handed one-year spectator bans.

Although violence at sports events is common in Turkey, there is an additional political aspect to Sunday's incident. Pro-government fans have claimed that members of the Çarşı fan group, which lent major support to the anti-government Gezi protests of May and June, invaded the pitch. Still others have said the unruly spectators were members of 1453 Kartalları -- Eagles of 1453, the year in which Ottoman armies conquered then-Constantinople, now İstanbul -- an alternative fan group established very recently under orders of the Justice and Development Party (AK Party), according to some accounts.

Beşiktaş Çarşı made an announcement claiming that the pitch invaders had nothing to do with Çarşı. “These events were orchestrated. Melo is not the reason, he was only the means [of provocation],” the group tweeted on its official account.

Some said the pitch invaders shouted pro-Gezi slogans, while other witnesses said that a group of 100-150 fans who seemed to be detached from the game in progress broke onto the pitch. One of those detained said he ran onto the pitch out of frustration at Melo's taunting, police sources said.

Turkey has been strongly polarized politically during the past decade. The AK Party government has strong voter support, having gained half of the vote in the 2011 elections. However, those who don't support the ruling party are increasingly frustrated and many strongly supported the Gezi protests that started in May and spread to other provinces in the form of mass anti-government protests that resulted in five deaths. Given Çarşı's strong support for all protestors regardless of their favorite team, it comes as no surprise that football is the new field for political clashes, but the government's later attempts to control football fans have also probably played a role. The government hastily adopted a regulation banning political slogans at games at the start of the league this summer.

The government reaction was not very different after Sunday's derby game. “Radical measures will have to be taken to ensure that such events do not occur again,” said Deputy Prime Minister Bülent Arınç, speaking to journalists on Monday.

Another deputy prime minister, Bekir Bozdağ, also commented on the game, saying he didn't think Sunday's violence was the result of an organized endeavor, however he did warn against “radical groups” and even terrorist organizations trying to dominate football.

İstanbul Governor Hüseyin Avni Mutlu tweeted his regrets, saying a game that was supposed to be an enjoyable challenge had caused disappointment among all fans.

There were security flaws in Sunday's game. Local sports officials admitted that the stadium was filled beyond capacity and thousands entered without tickets. Many of those who came in by climbing over barriers and stadium walls were also, naturally, not searched.

Minister of Youth and Sports Suat Kılıç said in a press conference on the game that it was possible to remove some amendments to a 2011 law, as these assigned the duty of ensuring stadium security to private security companies instead of the police. “Stadium security can be taken from private firms and given back to the National Police Department,” Kılıç said. However, he added that UEFA and FIFA generally prefer a less pronounced police presence inside stadiums.

Minister Kılıç said: “Ten of the entrance doors to the stadium were broken and the security wall was broken. It has also been established that many turnpikes were vandalized. It is also debatable whether monetary fines and one-year match viewing bans will be adequate [punishment for the pitch invaders].”

However, İstanbul Police Chief Hüseyin Çapkın denied allegations that there were security flaws. “Nobody entered without a ticket. They only entered after tearing their tickets because some of the turnpikes didn't work.” He also indicated that further detentions were expected.

Republican People's Party (CHP) Deputy Sezgin Tanrıkulu claimed on Monday that the events were a plot against Çarşı, which he claimed the government wants to punish for its support of the Gezi protests. He also filed a parliamentary inquiry addressed to Prime Minister Recep Tayyip Erdoğan, asking whether the government was conducting a policy of intimidation against the fan group. In his query, he also recalled news stories claiming that four prosecutors specializing in sports and fan violence had been assigned to watch the derby closely ahead of the game. However, the İstanbul Prosecutor's Office denied on Monday that any prosecutors had been assigned the task of monitoring the game at any time.

Professor of political science Doğu Ergil, answering Today's Zaman's questions on the game, said a “developmental delay” in Turkish democracy seems to be the cause of the increase in politically motivated violence at sports events. “Society is frustrated due to the arrested development of democracy, and frustration triggers violence. Since there are no other outlets to express one's frustration, this is what happens.” He said so far Turkey has failed to establish democracy as a common ground or as a form of partnership for all. Ergil noted that Turkey's historical tradition of “tutelage” regimes remains in place. “Whichever group dominates the state, it puts this system of tutelage to work. But democracy is a culture of compromise, and imposing one's opinions on others leads to frustration.” He said the government's move to outlaw political slogans at football games was what caused the frustration at this particular event. “Governments in Turkey are not here to govern, but to give orders.”

He blamed a “might makes right” mentality as the cause of the polarization, both in sports and other fields. Recalling last-minute changes passed in Parliament to ease the punishments of several football clubs whose administrators were found guilty of match rigging last year, Ergil said: “There are no rules in Turkey. There is only [government] power. And things transpire the way they want them to.”

Koray Çalışkan, a lecturer in political science at İstanbul's Boğaziçi University, agreed with Ergil, saying the AK Party's blend of authoritarianism and political Islam was causing frustration among the masses. “This is called a ballotocracy. Democracy is the name you give to what is done between two elections. Erdoğan is criminalizing every act. He accused Kurds on a hunger strike of eating kebabs; he demeaned those who protest at Gezi as thugs. He treats legitimate and democratic protests as a crime.”

As a rule, “Non-political spheres are politicized as democracy weakens,” Çalışkan explained. He also added: “The AK Party holds its own party congresses at stadiums, but then won't let people use political slogans, which is slightly reminiscent of Hitler's era. People first take to the streets, and then when that is suppressed, to the stadiums.”

Çalışkan also said: “I think [Eagles of] 1453 was founded by the AK Party, although of course that was possible indirectly.” He said that if there is further pressure on sports fans, nobody will be able to tell where, when or how the tension might explode.

However, Fırat Aydınus, a spokesperson for Eagles of 1453, denied any links to the AK Party. He also said none of their members were taken into custody during the pitch invasion detentions on Sunday night.

Security flaws or not, the political aspect in the violence's aftermath is undeniable. AK Party Deputy Şamil Tayyar, known for his outspoken support and love of the prime minister, initially took the invaders to be members of the pro-Gezi Çarşı and then wrote in a tweet during the pitch invasion: “They are chanting pro-Gezi slogans. They have no dignity.”

Rivalry between politically differing fan groups has in fact been the norm since the start of the league in mid-August. Pro-government and pro-Gezi groups supporting Beşiktaş, Galatasaray and Fenerbahçe have fought on the bleachers at almost every major game. The games were also highly politicized, with pro-Gezi groups chanting Gezi slogans in the 34th minute of every game, as 34 is İstanbul's license plate number. Only the pro-government team Kasımpaşa chanted slogans praising the government and Turkish riot police, who were widely criticized both nationally and internationally for their brutal handling of the Gezi protests, in the 34rd minute of their team's games.

Since 2010, fans have been increasingly inclined to express their political frustrations at sports events. Erdoğan was loudly booed in 2012 by Fenerbahçe fans as he attended the funeral of legendary player Lefter Küçükandonyadis at Fenerbahçe's Şükrü Saracaoğlu Stadium. Previously, he was booed by fans at the opening ceremony of the new Galatasaray stadium in 2011 and also in the basketball arena, at the final match of the 2010 FIBA World Championship which was hosted by Turkey and contested by Turkey and the US.