From jubilation in Tahrir, Egypt returns to Mubarak-era politics

The course of Egypt's transition has raised concerns that the most populous Arab nation will fail to build state institutions free from corruption and nepotism that can deliver political stability and economic growth. 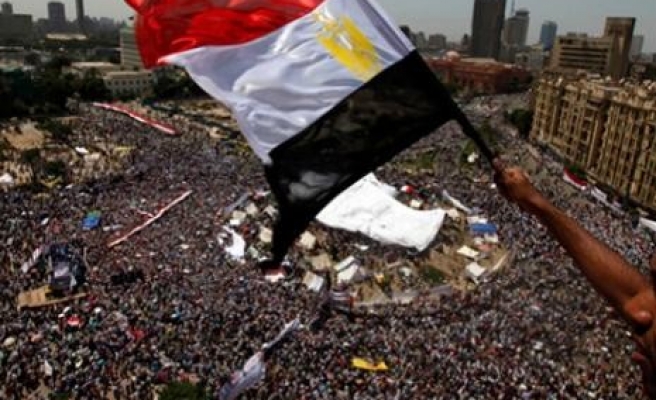 In a dusty courtyard in Egypt's Nile Delta, men gather to ask for favours at the home of retired police general Sayyed Azb.

Some are seeking jobs, others want certificates proving they are literate or help in securing building licences - a throwback to the patronage politics of Hosni Mubarak that many Egyptians had hoped would disappear when the autocrat fell three years ago.

What Azb has to say suggests the chances of a fresh start when Egypt elects a new parliament in the next few months are slim. In an impromptu address, Azb, who once served as a parliamentarian representing Mubarak's now-defunct National Democratic Party (NDP), offers his visitors the services he hopes will win their votes in the next parliamentary election.

"You reap what you sow... This is the nature of the Egyptian people... Personal services come first," says Azb, smoothing the sleeves of his grey galabiya, the traditional garb of those he hopes to woo at the ballot box.

"We are not like America yet... The culture of opinion and debate, no, no... This maturity does not exist here."

Egypt has struggled to achieve the kind of democracy many demanded during the protests on Cairo's Tahrir Square that helped to end Mubarak's 30 years in power.

Abdel Fattah al-Sisi, the army chief who ousted elected president Mohamed Mursi of the Muslim Brotherhood last year after more protests, went on to win a presidential vote himself.

He has since tightened his grip and rolled back political reforms introduced since the 2011 uprising, succeeding partly because many Egyptians chose stability over greater freedoms.

How long that sentiment will last is an open question, but the stakes are high for Egypt, which has a peace treaty with Israel and controls the strategic Suez Canal.

Egypt has been without a parliament since 2012, when a court dissolved the first democratically-elected chamber in more than 60 years, overturning a major accomplishment of the uprising.

The Muslim Brotherhood, which won the largest number of seats in the parliament, has been banned. Thousands of its members now languish in jail.

New legislation on electing the parliament has disappointed activists, who say the law makes it easier for Mubarak-era cronies to restore their influence while sidelining smaller parties born after the 2011 revolt.

Another law outlining electoral constituencies has yet to be published, but Azb expects it to favour smaller districts - a return to the Mubarak days when local figures with cash and connections dominated the polls.

Dates for the next vote have yet to be set. But former NDP members, from small-town notables such as Azb to big names like ex-foreign minister Amr Moussa, are planning their comebacks.

New faces have emerged, but they are not those of the youth activists who dominated Tahrir Square during the 18-day revolt.

Azb's adversaries in Kafr Shokr, an agricultural town built along the still, green waters of an irrigation canal that shoots off the Nile, include film director Khaled Yousef, a staunch Sisi supporter. Another candidate is a local factory owner who hopes to reap the political rewards of the jobs he provides.

The course of Egypt's transition has raised concerns that the most populous Arab nation will fail to build state institutions free from corruption and nepotism that can deliver political stability and economic growth.

Khaled Dawoud, spokesman of the liberal Dostour Party, said the laws were designed to cement Sisi's hold and stifle debate.

"We are back to the days when political parties are being attacked day and night," Dawoud said as he stood in the blistering sun, awaiting the start of a recent court hearing against a group of secular activists.

"We keep reading in the press that the president's relations are directly with the people and so he doesn't need parties. The general mood among the public is that we need to unite and support Sisi and we don't need to bother with a parliament."

New parliamentary polls were to be held first under a plan issued after the army overthrew Mursi. But this was later turned on its head, with Sisi elected president in May and a parliamentary vote set to take place within six months.

Speaking at the United Nations this week, Sisi said he was following the plan to build a new civil democratic state that would respect freedom of speech and religion. He has promised the parliamentary elections would be held before the year end.

But time is running short for candidates to campaign and the constituencies have yet to be finalised. Opponents say Sisi is stalling to allow himself enough time to consolidate his rule.

Ruling through a combination of presidential decree and laws drafted at the government level, Sisi has curtailed political freedoms, cut energy subsidies and pressed his big state agenda without debate in parliament or opposition in the street.

Unlicensed protests have been outlawed and some leaders of the 2011 uprising are behind bars for taking part in small gatherings. Some laws passed in the transitional phase will be reviewed by the next parliament, but its effectiveness could be decided by its makeup, not just its powers.

The election law restores a system where candidates elected on an individual basis will take up 420 of the 540 parliamentary seats, while 120 will be elected from closed party lists, hurting smaller parties which already struggle to make a splash in country where politics is dominated by big personalities.

"The likely outcome is a parliament dominated by individuals rather than parties and ideologies, and therefore one that is scattered," said Nathan Brown, professor of political science at George Washington University in the United States.

"On paper, if you had a parliament with a strong... bloc, you could do a lot. If you get the parliament people expect, it would struggle to formulate a positive legislative agenda."

The United States pours billions of dollars of aid into Egypt each year and has called for democracy, but recognising its strategic role in a turbulent region, has remained cautious.

Politics are not dead in Egypt despite the challenges. In the absence of clear dates or rules, candidates such as Azb are on the campaign trail. Parties have been forming electoral alliances that will position them better to win seats.

Including a large number of ex-NDP loyalists with money and rural connections is the Egyptian National Movement linked to former airforce commander Ahmed Shafik, Mubarak's last prime minister, who lost against Mursi in the 2012 presidential vote.

Kamal Ganzouri, a prime minister under Mubarak in the 1990s and again under the military committee that took over in 2011, is also trying to form a bloc of about 120 well-known loyalists to support Sisi in parliament, political sources say.

In the absence of the Muslim Brotherhood, the Salafist Nour Party, will represent the religious right. Its leader Younes Makhyoun criticised the election law, saying a diffuse parliament would make it harder for the prime minister to form a strong government.

If the presidential polls are an indicator, candidates may struggle to attract voters. Less than half of those eligible turned out in May, even after voting was extended. Sisi took over 90 percent of the votes then, in another echo of the pre-uprising past and in contrast to the closely-fought presidential race of 2012.

"Why did we do the revolution? It was partly against a one-party system... We are going back to the days of Mubarak, the days of apathy when the result was already known and people didn't vote," Dawoud said.

Turnout tends to be low in parliamentary elections as parties lack name recognition and the public is suffering from political fatigue.

"What elections? What dirt? What have all these elections brought us?" said one Egyptian shopper, shrugging his shoulders, when asked about the transition. "Ask me about these prices," he muttered, wandering off to inspect some tomatoes.