"We are running our own forecasts for the medium term so let's first of all see if there is any fiscal gap because you know these things are very sensitive to the growth rates" Yannis Stournaras said. 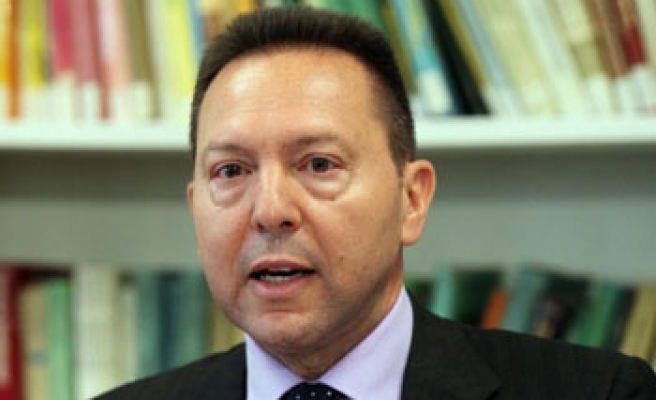 Greece may avoid a budget hole opening up over 2015 and 2016 in contrast to latest forecasts by EU/IMF lenders and its recession will be smaller than expected this year if a bumper tourist season continues, the country's finance minister told Reuters.

Yannis Stournaras's comments in a wide-ranging interview marked the most upbeat assessment of Greece's prospects since the twice-bailed out nation returned to crisis mode this summer, stoking fears of a new flare-up in the euro zone debt saga.

In his office overlooking parliament - where a window still bears a large crack from a bullet fired by angry anti-austerity demonstrators in 2010 - Stournaras confirmed Greece was on track to produce a budget surplus this year before interest payments and said economic risk had abated.

Instead, he said the biggest challenge ahead was mainly a political one tied to austerity fatigue.

"I don't see any economic risk - it's political risk and it has to do with the fatigue of MPs," he said.

"MPs just reflect the average man or woman in the street - they have to believe that there is light at the end of the tunnel. If they believe it they will continue voting the few necessary measures left over, if they don't they are not going to. This is the great risk."

In contrast to the latest projections by EU lenders who predict Greece faces a fiscal gap of around 2 percent of GDP or about 4 billion euros over 2015-2016, Stournaras said Athens' own forecasts, when updated in the fall, may show that there is no such gap to fill.

It was the first time a Greek official has suggested that avoiding a fiscal gap - or a shortfall compared to budget targets - over that two-year period is possible.

"We are running our own forecasts for the medium term so let's first of all see if there is any fiscal gap because you know these things are very sensitive to the growth rates," he said. "And if there is any, we definitely cannot cover it with wage or pension cuts or with tax rises. Any gap should be covered through reforms."

Autumn discussions on how to bridge that budget gap - given Athens is loathe to usher in more austerity - are expected to be the next big test for Greece's shaky coalition and avoiding a gap altogether would be a major boost for the government.

"It is possible," Stournaras confirmed when asked if it was realistically possible to avoid such a gap, adding that a higher growth rate and better budget execution would help.

He also struck an upbeat note on prospects for the country's recession-mired economy, confirming the forecast for a recession of 4.2 percent this year and a return to growth next year, with a further boost if tourism receipts stay at the current pace.

"May (tourism) receipts are much much better than expected, if we continue like this in the months to come then definitely recession this year will be around 4 percent and then next year we will have a positive sign in front of the growth rate," he said.

He declined to discuss further debt relief for Greece - which many analysts believe is inevitable but which Germany says must not be discussed now - saying he had other priorities.

"For me now the main priorities are to have a primary surplus and produce a positive growth rate next year," he said.

"If we have a positive growth rate for one or two quarters and at the same time have a primary surplus then anything is possible - even to tap markets next year," he said.

Once funding from its latest bailout ends next year, Greece may have to take a small loan from its partners but may also be able to tap markets instead given small funding needs, he said.

He expected more interest when a new tender is launched to privatise Greece's state natural gas company DEPA after the first effort failed in June.

"YOU DON'T WANT TO KNOW"

A respected economist who became finance minister a year ago, Stournaras has been widely credited for spearheading Greece's bumpy return to fiscal rigour after it nearly went bankrupt and crashed out of the euro zone last year.

At the time, Greece was the euro zone's favourite whipping boy, attacked by all sides for failing to keep pledges to reform and its seemingly unending funding needs, and Stournaras said his first few months in the job were also his toughest.

"But things now are much, much better. Now I have only friends in the Eurogroup and people appreciate the huge effort."

Analysts say Greece is still not out of the woods after six years of recession and repeated rounds of austerity, but Stournaras maintained that Greece was much better off for having avoided the "total disaster" of a euro zone exit, though he acknowledged mistakes had been made along the way.

"There were blood and tears and mistakes done both by Greece and the euro zone - huge mistakes by both. It's not a secret that Greece did not behave according to the rules of a fixed exchange rate system but also it's equally true that the euro zone had no crisis resolution mechanism," he said.

"Now we have both learned our lessons. They were tough, but we are wiser."