How Russian, Ukrainian forces stack up

Moscow mobilised some 150,000 troops last week before moving into Ukraine, many of them recently re-equipped units. 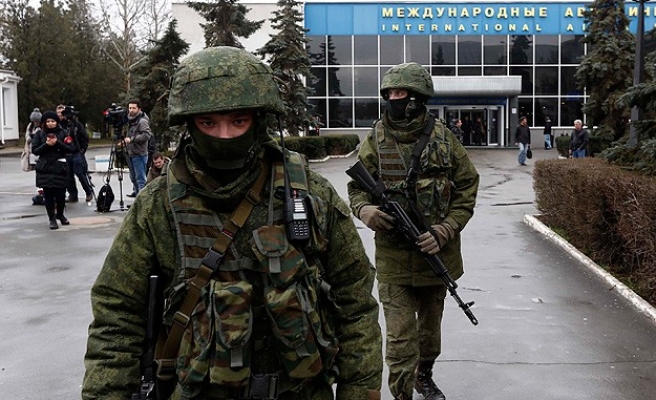 Underfunded, underequipped and with its senior leadership often seen close to Moscow, Ukraine's military has been something of a no-show in its confrontation with Moscow.

But that, experts say, has probably been largely deliberate.

Ukrainian forces have been involved in some stand-offs with Russian forces particularly around bases in Crimea, some of which have long been shared between Kiev and Russian forces attached to the Black Sea Fleet.

Ukraine's senior military leadership served much of their careers in the Soviet Army with their Russian colleagues before the breakup of the Soviet Union in 1991. Neither they nor their new broadly pro-western leadership in Kiev are keen to provoke a confrontation they know they cannot win.

"I think there are strong directives from Kiev in place to avoid confrontation," says Dmitry Gorenburg, regional analyst for the U.S. government funded Centre For Naval Analyses, part of the larger not for profit CNA Corporation.

"This actually fits well with commanders' inclination because of their familiarity with the Russians - especially in Crimea, where they are essentially co-located."

A single incident could still cause further escalation, he said.

On Monday night, Ukraine's ambassador to the United Nations said Moscow now had moved some 16,000 troops onto the Crimean peninsula. Having mobilised up to 150,000 personnel last week for what it said at the time were exercises, Moscow could rapidly reinforce with many more if it wished.

London's International Institute for Strategic Studies think tank estimates Russia has some 845,000 military personnel alongside a 2 million-strong reserve of those with recent military training.

Since the 2008 Georgia war, it has increased military spending by more than 30 percent to some $68 billion a year.

Other naval forces have also operated from the port, which has been central to supporting recent naval operations in the Mediterranean and against Somali pirates in the Indian Ocean.

IISS estimates Russia has almost 1,400 combat aircraft of various types, though some are outdated by Western standards.

Ukraine accused Russia of attacking its communication systems on Tuesday, saying the mobile phones of MPs and its security chief had been blocked with equipment installed at a telecom office in Crimea. Ukrainian security chief Valentyn Nalivaichenko told Reuters the attack was in its second day.

Russia's security service had no immediate comment on the accusation.

IISS estimates Ukraine spends some $2.4 billion a year on defence but has struggled to keep its armed forces up to date.

Its most elite units have experience of fighting alongside NATO in Afghanistan and elsewhere on international peacekeeping operations. Most of its personnel, however, have too little experience of modern post-Cold War equipment.

It has an estimated 129,950 service personnel with 64,750 in the Army, 13,950 in the Navy, 45,250 in the air force and another 6000 in separate airborne units. Before the recent troubles, its paramilitary forces registered some 84,900 though that number is expected to have fallen with demobilisation of elite riot units accused of killing unarmed protesters.

Moscow mobilised some 150,000 troops last week before moving into Ukraine, many of them recently re-equipped units.

Largely housed in bases alongside or next to the much more powerful Russian Black Sea Fleet, the Navy has little or no ability to deploy to sea unless allowed by Moscow.

Poor maintenance and a shortage of spares have kept its single Russian-built Foxtrot-class diesel submarine out of the water. It has a single frigate, recently deployed to NATO counter-piracy operations off Somalia, another 10 patrol boats and Corvettes, five minesweepers, five landing ships and aircraft and several dozen other support vessels.

Many of those are believed out of service. Similar problems afflict its Cold War-era jet fleet that seemed unable to stop Russian jets, according to Kiev, violating its airspace.

On paper, Kiev has 121 combat aircraft including MiG-29 and Su-27 fast jet fighters and older Su-24 and Su-25 attack aircraft. In reality, many are grounded.

IISS estimates its pilots get only 40 hours flying time or so a year compared to 60-100 for their Russian counterparts.