Dubious religious preachers usually come from small towns and make it big, amassing enormous wealth in the process from those who become their disciples. 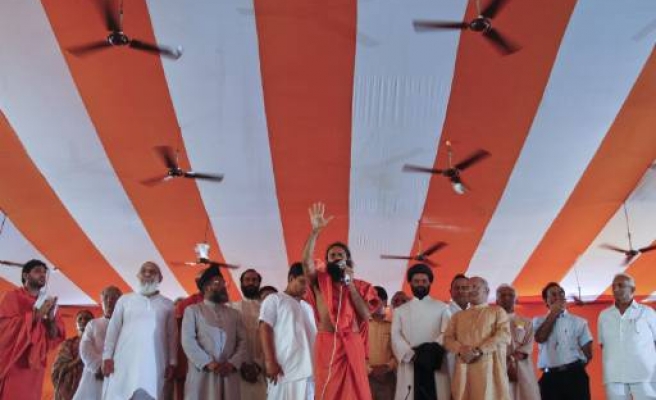 The recent arrest of preacher Asaram on sexual assault charges has brought the phenomenon of India's self-styled "godmen," many of whom boast a substantial following, back into the limelight.

Dubious religious preachers usually come from small towns and make it big, amassing enormous wealth in the process from those who become their disciples.

Madhu, 52, has two sons, both of whom are now settled in leading engineering institutes.

Surprisingly, she credits her success in raising them not to herself, but to Swami Shivanand Yogi – a self-styled godman who lists scientists, doctors, businessmen and high-level government bureaucrats among his followers.

Madhu told Anadolu Agency that the "blessings" of Yogi, who has been her guru for years, "remove all hurdles."

Sushila, a 28-year-old laborer, has two daughters, but she desires a son so as to earn the respect of her in-laws.

She spends her evenings cleaning up the ashram (a center devoted to spiritual activity) of Karamdev, another self-proclaimed godman, located near where she dwells.

Sushila hopes that by serving people there she might secure Karamdev's "blessings" and, eventually, a son.

Sociologist Dipankar Gupta argues that, when the power to reason fades, deprived people like Sushila need something to hang on to.

"This can even be in the form of seeking divine blessings from a self-proclaimed 'Baba' of the neighborhood, for material comfort and beyond," Gupta told AA.

"Through worshipping them, they cover their likes and dislikes, sometimes becoming prey to inhuman rituals," he added.

Uday Sahay, a former police officer specialized in sociology, sees the phenomenon of religiosity, godmen and their hold on large numbers of followers in terms of the interplay of market forces on one hand and the religious nature of India and its people on the other.

"There is a religious India with rituals, festivals, preachers, god, demi-gods and godmen," he told AA. "Then there is the spiritual India, with deeper values and philosophy."

"We tend to mix them up," Sahay added. "When we see someone performing religious rituals and ceremonies, we attribute spiritual values to that person and give him or her anelevated status."

But Ashish Nandy, a prominent social psychologist, insists that most of the followers of the godmen and swamis come from urban, not rural, areas.

"All this relates to insecurity of sorts: social, psychological and economic," he told AA.

"These godmen, under such insecurities, seem to provide 'supernatural insurance' or the so-called 'luck factor' in the form of 'divine belief' – not in oneself, but in the guru or godman," Nandy explained.

"This promotes their business of powerful association, through 'dalali' [playing the middleman] between the educated, the rich and the elected political class," he added.

Nandy says politicians try to appease gurus with material gifts, such as land or money, so that "they, too, can seek the divine luck through him to win the next election, thereby completing the circle."

Sahay, the former police officer, believes there is a huge market for such services, especially since religion has such a large base in India.

"If you have a huge market, you have marketers and racketeers along with genuine people," he said. "The godmen are a reflection of this bazaar. They acquire some knowledge of basic religion, have the gift of gab and start preaching."

"They may rise to become 'godmen,' but they retain basic weaknesses and remain susceptible to all kinds of temptations," he added. "In their blind faith, followers don't see this – nor do they see his set-up for the business venture it is."