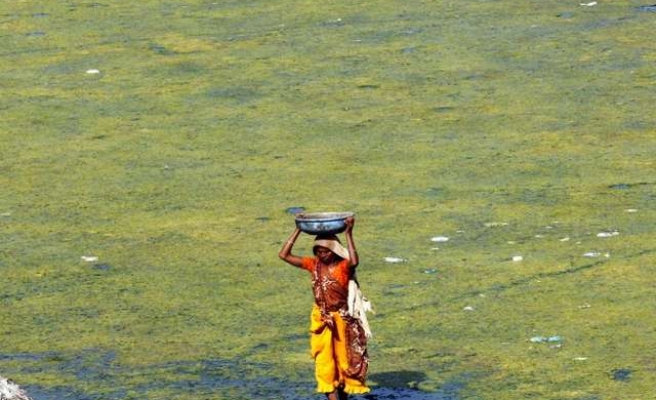 The issue of open defecation in India, forced by a lack of toilets in the homes of many of the country’s citizens, has long been an issue. It has been forced back into the fore by the Badaun rape case in May, when two teenage cousins who left their homes to relieve themselves were abducted and gang-raped. Their bodies were later found hanging from a tree.

More than 620 million people, almost half India’s population are forced to relieve themselves in open spaces, according to the census of 2011. In states like Jharkhand and Madhya Pradesh, more than 80 percent of the rural population defecate in the open. Women are the worst affected, as they become exposed to the risk of harassment and sexual assault.

Nineteen-year-old Reshma lives at a village in Sehore district of central Indian state Madhya Pradesh. Lacking any toilet facilities in their homes, Reshma and her friend Meeta have to go out daily to relieve themselves – exposing themselves to danger. She recalls one night last year when in a nearby field a local youth tried to take advantage of the cover of darkness to harass her.

“We face humiliation whenever we go out to relieve ourselves in the open. But on that particular day a youth tried to take advantage of our situation,” she said. “Harassment and teasing are common for us, when we are out in the field.”

In at least a dozen cases of rape reported in Madhya Pradesh this year, the victims were attacked when they went out to relieve themselves. Archana Sahay works for non-governmental organization Aarambh, who along with UK-based charity WaterAid have constructed toilets in slum areas Madhya Pradesh’s capital Bhopal.

“We received complaints from several girls who live in slums that they face one or the other kind of harassment when they go out in the fields. Many times local goons have attempted to rape them,” she says.

“After the construction of toilets, harassment of girls has been greatly reduced. This shows that to an extent open defecation is associated with rape cases in India. Besides these girls face harassment when they go out to fetch water,” says Sahay.

Workers in the sanitation sector worry that concerns about being attacked force women to wake up before sunrise in order to relieve themselves and they often drink less water during the day, adversely affecting their health.

The women’s concerns are real. According to a report made available by police authorities, Madhya Pradesh state registered 1,106 rape cases between January 1, 2014 and March 30, 2014 -- an average of a rape every two hours in the state.

In 2011, 20-year old Anita Narre left her marital home within a day of her wedding to protest against the lack of a toilet in her husband’s house. An NGO awarded her US$10,000 for her bold initiative.

“I told him (my husband) that if you want to see me back in this house you should construct a toilet. I cannot go outside,” says Narre. “I am not used to it and you have to do it for my sake. I don’t have any problem with you except this one.”

Narre has become well-known in tribal village Jheetudhana, around 180 kilometers from Bhopal, and her protest has increased demand for toilets in the tribal belt.

“Every woman has a right to live a dignified life and they should fight for it. I think it is not at all safe for women to go outside for defecation,” she says. “They have to face hardships and on many occasions, they are misbehaved. Women in my area are now demanding toilets.”

The Madhya Pradesh government had made provision for the construction of a toilet in every rural household as part of the Total Sanitation Campaign -- a comprehensive programme to ensure sanitation facilities in rural areas with a broader goal to eradicate the practice of open defecation.

Local journalist Mahendra Chauhan points out the campaigns’ methods have faced severe criticism. They plastered large posters around the state that tried to shame those who defecate in the open by comparing them to dogs. The hoarding, showing a man and a dog defecating in the open, reads: “Animals can’t use toilets but you can. Have you built your toilet?”

Chauhan says that type of campaign is not likely to be effective. "I don't think it is going to create any awareness. It was offensive and not good for the society."