Japanese nuclear plant in Turkey to have safest technology

Mitsubishi Heavy Ind. is set to build the "ATMEA1" nuclear plant in Turkey's Sinop, designed in line with the needs of Turkey and the "highest level of security" 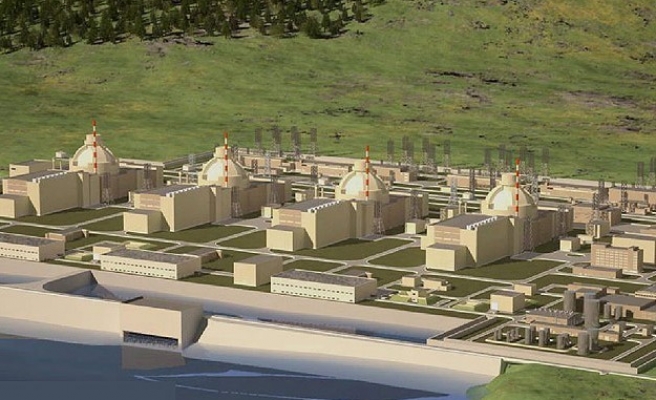 Mitsubishi Heavy Industries, the Japanese partner of the consortium to build the new nuclear power plant which Turkey will establish in its northernmost coastal city of Sinop, has broken new ground in technology to fulfill the promise of Japanese Prime Minister Shinzo Abe on a "safe nuclear energy" for Turkey.

The company is to build the "ATMEA1" plant in Sinop, designed in line with the needs of Turkey, together with the French company Areva.

In May 2013, Turkey and Japan signed the intergovernmental agreement that stipulates cooperation in nuclear energy, during the visit of the Japanese Premier to Turkey with Japanese delegates, when he guaranteed that his country would provide Turkey the "highest level of safety" in nuclear energy.

In light of the seismically-active geography of Turkey, the Mitsubishi Heavy Industries of Japan settled upon bringing a series of technologies into action to raise the level of security in the plant to be built in Sinop, thanks to the lessons learned from Fukushima nuclear disaster of 2011.

"We plan to start providing electricity by 2023"

Speaking to Anadolu Agency in an exclusive on the new nuclear power plant in Sinop and nuclear energy security, Director of the Global Nuclear Projects Department of Mitsubishi Heavy Industries, Ltd. Masato Iida stated that “We plan to start providing electricity through the power grid by 2023, Turkey’s 100th birthday.”

Iida stressed that the project involved a lot of civil engineering work, because they "are building a huge power plant where there is nothing at the moment."

"For this civil engineering work, we will need a lot of help and the main player will be Turkish human resources,” he said, expressing the urgent need for local industries to join the process.

He noted that this is for the accountability of their work, to prove that they have undertaken sufficient, qualified work while building the power plant.

The Mitsubishi Heavy Industries official also elaborated on the specialties of the nuclear power plant.

“The plant has three steam generators and each has its own circulation loop. Although there are three loops, one loop can provide enough cool water to cool down the reactor in case of emergencies. Each has a 100 percent cooling function, this means they are with a 300 percent cooling ability. We also have a back-up cooling system, altogether it makes 400 percent,” he added.

Iida went on to say that ATMEA1 also has a function called "core catcher" which catches the melted core in case of core meltdown, which had happened in Fukushima. "This is very new technology.”

“We are planning to build the Sinop nuclear power plant at the elevation which the tsunami cannot reach,” he said regarding the precautions to be taken for safety in the power plant.

He also informed that the reactor would be covered by thick concrete "to prevent damage from airplane crash. After 9/11 they have carefully studied this possibility.”

The Mitsubishi Heavy Industries official underlined that, as France’s nuclear regulation agency ASN agreed,  the ATMEA1 could not be damaged by a disaster like Fukushima.

"They have made the review," he said, "and approved the safety of ATMEA1.”

Iida described the Mitsubishi Heavy Industries-AREVA collaboration for the design and manufacture of ATMEA1 as "the first in the world," saying "this is why it involves a lot of new technology.”

“After the Fukushima disaster, it has become extremely important for power companies how to handle severe accidents especially at nuclear power plants. During the design of ATMEA1, they have seriously considered how to safely shut down the reactor at the time of a severe accident,” he said.

He highlighted that Turkish-Japanese cooperation in nuclear energy would continue.

“Turkey and Japan have been good friends for many years.  Building a nuclear power plant is something like a marriage. We have to get along for many years. We have to make safety assessments over the years to come and we have to keep providing the nuclear fuel. So it’s not the end once the building process is completed,” concluded Iida.