Khojaly: massacre which scarred a nation

Today marks the 23rd anniversary of the killing of Azeri civilians in disputed circumstances during the bitter war for the Nagorno-Karabakh region. 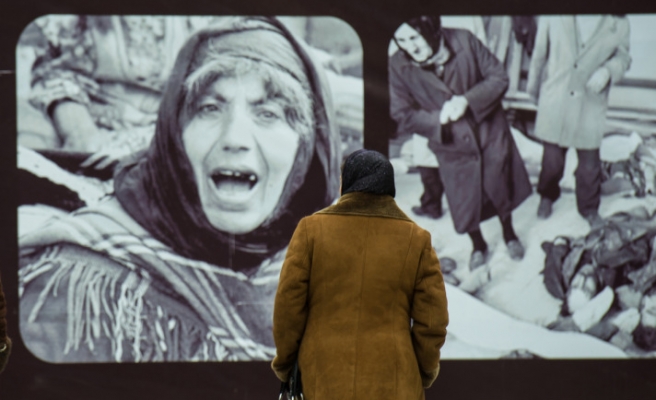 This day marks the 23rd anniversary of one of the bloodiest and most controversial incidents of the war between Armenia and Azerbaijan for control of the Nagorno-Karabakh region, the legacy of which still poisons relations between the two neighbors today.

On February 25, 1992, Armenian militia attempted to seize Khojaly, a strategic town in Nagorno-Karabakh, since it had the region’s only airport.

Armenian fighters wanted a transport link with the Republic of Armenia other than mountainous Lachin corridor.

Assaults during the winter of 1992 forced many Azeri civilians to flee to safer areas. Assisted by the Russian 366th Regiment, Armenian fighters on February 25 moved to capture Khojaly, a move which resulted in the remaining civilians and a few lingering Azeri fighters to flee towards Azerbaijan.

"As they approached the border with Azerbaijan, the civilians came across an Armenian military post and were cruelly fired upon. At least 161 people are known to have been murdered in this incident," Human Rights Watch said on its later report into what became known as the "Khojaly massacre."

The Azerbaijani authorities disputed HRW’s figure and claimed that 613 civilians -- including 106 women and 83 children -- were killed; Azeri officials also insisted that Armenians committed killings elsewhere in the enclave.

Armenia has claimed that the killings occurred as a result of wartime military operations.

The account of one Azeri survivor points to the brutality of the attack: "We were targeted by a hail of bullets. The first shots killed three people who were with us and we ended up being captured," said Kadim Abbasov, 73, speaking to The Anadolu Agency last year on the anniversary of the massacre.

He added: "We had been fighting with a hunting rifle. What can you do with a rifle against machine guns?"

Anatol Lieven, a journalist with The Times of London, reported on March 3 a terrible scene: "Several of them, including one small girl, had terrible head injuries: only her face was left. Survivors have told how they saw Armenians shooting them point blank as they lay on the ground."

Some accounts suggest that the massacre was an act of revenge.

One Armenian leader later said: "Before Khojaly, the Azerbaijanis thought that they were joking with us; they thought that the Armenians were people who could not raise their hand against the civilian population. We were able to break that [stereotype]. And that’s what happened."

The speaker was Serzh Sargsyan, then the commander of breakaway Nagorno Karabakh's military forces and current president of the country. His remark was published in an interview with U.K. journalist Thomas de Waal in a 2004 book about the conflict. There was no suggestion Sargsyan was present during the massacre.

Similarly, Markar Melkonian, the brother of the Armenian militia leader Monte Melkonian, conceded in his 2005 book, "My Brother's Road," that the assault on the town was a strategic goal, adding "but it had also been an act of revenge."

Some nations like Turkey and Mexico have recognized and commemorated the massacre. On February 2014, a monument was built in the western Turkish city of Usak to memorialize the massacre.

The Turkish parliament issued a statement last year condemning the massacre and describing the tragedy as "one of the darkest pages of human history that has prevailing effects on the peace, tranquility and stability of the region."

Some U.S. states, such as Texas and Arkansas, have also recognized the Khojaly massacre.

Many commemoration events have been organized around Turkey. Last week, there was such commemoration held in Ankara and organized by the European Azerbaijan Society. Azerbaijan's envoy to Turkey, Faig Bagirov, described the 1992 massacre as the "Khojaly genocide" during a speech.

"While witnesses of the massacre are still living the pain, the criminals are living freely, thanks to the double standards of the world," Bagirov said.

Nagorno-Karabakh remains a frozen conflict between Azerbaijan and Armenia.

Since the end of the war in 1994, Armenian and Azeri delegations have held talks over the status of Nagorno-Karabakh under the supervision of the Organization for Security and Co-operation in Europe's Minsk Group. Those talks have so far produced no results and sporadic clashes still take place between Armenian and Azeri forces.

Navaid Aziz: The period of communicating with people only in the mosques has come to an end
Facebook
856B
Twitter
0
POOLAll Pools
PRAYER TIMES