Lebanese rubbish crisis not all as it seems.....

Various groups in Lebanon from different political backgrounds and sects have have come together to protest the governments failure and expressed their anger at the growing rubbish crisis. 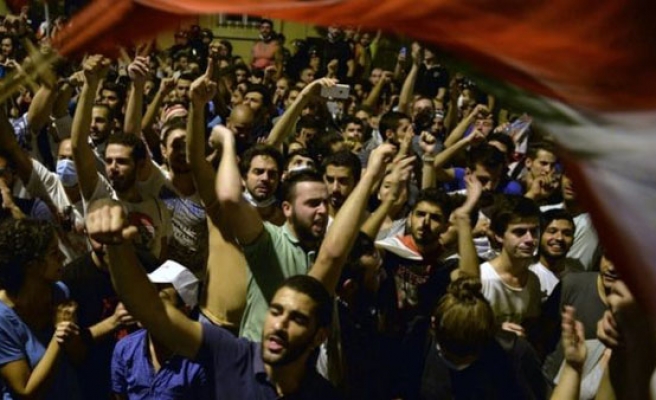 Can you tell us about yourself briefly? And also your role during the demonstrations?

So my name is Hussien Itani, a Lebanese communication professional, trainer on conflict transformation and advocacy and a Human Rights activists. My role during the #YouStink demonstration was closely coordinating with the mian organizers and a campaigner among my well established connections

We have been following the demonstrations in Lebanon but can you summarize the story of the protests? How did it start, progress and why?

The story of the protest starts few years ago with the Nehmeh Landfill issue (where the waste management company Sukleen composte our waste), people living in Nehmeh suffer from poor sanitation and health conditions because of this landfill however no listening ears from the successing governments have solved this issue. In January 2015, the town people of Nehmeh decided to do a sit in at the door of the landfill and prevent the waste trucks to throw them in that area. This caused lots of waste piling up in Beirut until the crisis was resolved by the prime minister and the ministry of enoviroment promise to solve this issue in 6 months (By June). By mid July, nothing has changed so the town people of Nehmeh closed down again the landfil but this time for good and the waste starting to pile up in huge amounts in the city of Beirut. Almost 2000 Tons of waste was piled up in between neighberhoods and residential areas which cause people to suffer from poor sanitation condition. Furthermore, some people used to light these piles of wate on fire to reduce the amount which led into the formation of CO2 and caused even more trouble.

All of this lead to demonstrations which was the culmination of issues that the lebanese were facing like bad electricity, water, security managemet but the waste management issue was the straw that broke the camel’s back specially that the Lebanese people are fed up from a Parliament that did not do an election at its time (2.5 years ago) and decided to extend itself till 2017 hence preventing the lebanese people to participate in its own governance.

Who do you see as the biggest responsible of “garbage” crisis?

How did the protesters get organised and gather as huge crowd?

We were simply around 30 people in the begining an we called each other through facebook messages then simply created a small event to call for a protest which was attended only by 50 persons in the begining. But as the crisis soared more people started to come in which put us in responsibility to organize it hence we called for volunteers and we did fundraisers online.

Why did the government recompense the protesters that severly? What is the excuse they have given?

Perhaps, do the government see the protesters affiliated with “external Powers” ? I mean, as you know, whenever these kinds of demonstrations occur, government can come up with the claim that protesters are used by some “secret, dirty hands”? True or false, is there something like this in Lebanon as well?

The minister of interior did even imply indirectly that Qatar are financing the demonstrations.

Which political groups, parties, organisations etc. in these demonstrations?

None. Some political parties tried to “hijack” the movement but the demonstrators many times “threw” out politicians who used to come to the demonstration and asked him to leave as “he represents the ones we are demonstrating against”.

How is the current situation about media? How does the mainstream media approach this demosntrations? Or is there widespread censoring?

Most media in the beging was sympathizing with us except for the ones who are directly funded by sectarian parties like Future, Al Manar and OTV.

There were some vandalism in the past and 14th of march accused the 8th march (Hezbollah amal) to have started that. After investigation it came out to be it was just frustrated protestors who didnt know how to reach except in this way.

But most of the protest are very peaceful.

As we heard, these demonstrations could gather almost all political sides of Lebanon, which were not able to stand together anyway by now. Is it true? Are all political sides in collobration now? And also what’s the protesters’ profile mostly? Is the majority youth?

The demonstrations gathered all polticial parties to gethet to have a similar agenda against the demonstors. After many years the parliament members are gathering tomorrow (wed 9 september) to actually discuss “how to counteract what is happening in the street” (instead of discussing real issues)

Is whole public opinion taking side with the protesters or are there tribes who condemn the demonstrations?

The public opinion is sympathizing with the demonds of the protestors but are not of complete support but we can say that many (if not most) of the lebanese are backing up these demonstrations and their demands.

It is obvious, beyond the garbage crisis, these demonstrations are targeting the Parliament. So what is the purpose and agenda from now on? Can we say that there is common demand/ purpose from all protesters from different political sides?

The parliament represent all what is bad in the system and its figure hence why it targets the parliament. The purpose of lobbying against it is to push for elections immediatly after democracy being taken away for many years.