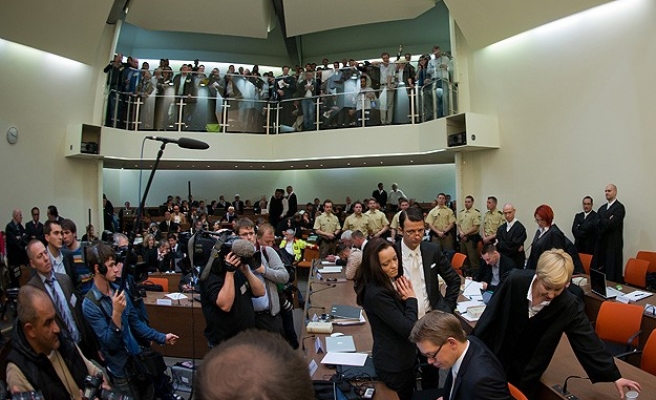 Her comments add to widespread concern in Turkey and Germany as to how the neo-Nazi group killed eight small-business owners of Turkish origin, a Greek immigrant and a German policewoman between 2000 and 2007, apparently without arousing the suspicion of the German police or intelligence services.

"The whole way the NSU terrorists went undetected for so many years when they were carrying out the most awful crimes, the whole way the families were treated - not as victims but potential suspects - the whole collapse of the investigation. all point to institutionalized racism," Fekete, director of the London-based Institute of Race Relations, told the Anadolu Agency.

Until 2011, the police and intelligence excluded any racial motives behind the murders and instead treated immigrant families as suspects with connections to mafia groups and drug traffickers.

Fekete says the policies and practices of the police, intelligence and the judiciary have systematically disadvantaged immigrants in Germany.

“We don’t say that all these people in these institutions are bad people who deliberately set out to be racist. Institutional racism can be inadvertent, indirect,” she explained, adding that much of it was deeply rooted in culture.

She said recent revelations into the NSU had also exposed collusion between the German intelligence services and the neo-Nazi group.

Fekete said: "We are not saying that the intelligence agencies were in a deliberate corrupt relationship with the far-right."

"But paying informants within the far-right scene without checks and balances and the failure to establish proper mechanisms of accountability point to an indirect collusion with the growth of the neo-Nazi terrorist scene."

Fekete noted that revealing the truth behind the NSU murders would not be easy and would take time.

“What we understand from different countries is that truth recovery is a long process,” she stressed.

“In some examples from the UK, the truth actually became established when someone from within these institutions was so ashamed about what had been going on that they came out and actually gave information - and that is what we call a 'whistleblower'," she said.

The NSU terror cell is believed to have been founded by three right-wing extremists who had lived underground from 1998 with fake identities.

Since the late 1990’s, Germany’s domestic intelligence agency, or BfV, recruited various informants from the right-wing scene who also had contacts with the trio.

But the agency failed to prevent the murders or arrest the suspects.

The German public only learned about the NSU and its role in the murders in November 2011, when two members of the group reportedly died in a murder-suicide following an unsuccessful bank robbery.

A third member of the group, Beate Zchaepe, is currently under arrest as the main suspect in the case, but remains silent.

The NSU scandal shocked the German public and sparked a debate on German security and intelligence organizations which were sharply criticized for underestimating the far-right threat.

The German government had concluded that, due to insufficient cooperation between federal and state security services and some mistakes by  individual officials, the murders could not have been prevented.

It promised reform and a stronger fight against right-wing extremism.

“The officials are saying that something bad happened but it was without intent, it was about misunderstanding - poor communications between different departments … so that is a kind of an interpreted denial of the real thing that happened,” Fekete argued.

“The evidence of institutionalized racism, particularly in the police, is overwhelming in the NSU case. It is hard as an outsider to understand why the politicians keep on denying it,” she stressed.

Fekete underlined that much work was needed to eradicate racism, which she described as a complex phenomenon with various aspects.

“The only way that we can really come to grips with this is first to actually name the problem and acknowledge it. Not to deny it, not to try to cover it up,” she said.

“Once we have done that, that allows us to go through a process of reform, which is all encompassing in the sense that you can go back and actually look at your text books to see whether your education materials, your comics, your popular media are somehow inadvertently reflecting racism," she explained.