In Old Homs, outside the ancient quarters, block after block of buildings has been utterly destroyed. Four, five or ten-storey buildings have collapsed, and hardly anything remains salvageable or even recognizable to locals. 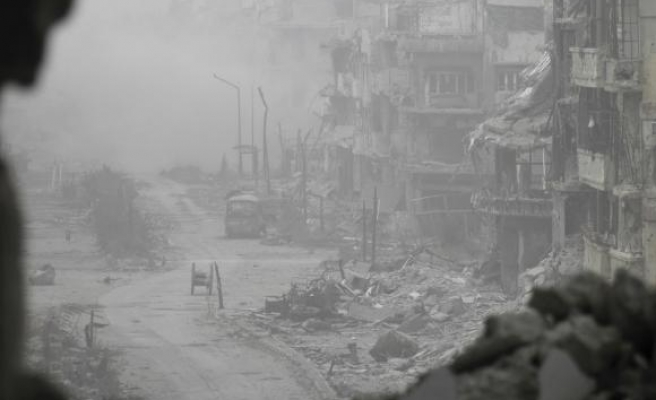 Less than a month after the last rebel fighters retreated from the centre of Homs, the sound of hammering echoes across its narrow, ancient streets as authorities rush to restore major landmarks.

No place is more symbolic of President Bashar al-Assad's military ascendancy in Syria's grinding, three-year conflict and the repair work carries a powerful message ahead of Tuesday's scripted presidential election, one he is guaranteed to win.

"Together, we rebuild," says a banner for Assad's re-election campaign, flanking the entrance to Umm al Zennar church in the central district of Bab Dreib. "Together, we want to live," says another.

Dazed residents returning home questioned how Syria's patchwork of Sunni Muslims, Alawites and Christians could ever be restored. The fighting has pitted overwhelmingly Sunni rebels, backed by foreign jihadi fighters, against the Alawite president and his Shi'ite backers in Iran, Lebanon and Iraq.

"We're fixing everything to make it look like it did before the war. We don't want any reminders of this terrible time. We want to forget," said a church usher, greeting the trickle of visitors who had come to check up on their church.

Inside the Syriac Orthodox building, constructed over an underground church which dates back nearly two millennia, damage that was visible only two weeks ago was already fixed.

Asked if he planned to vote, the church usher became nervous. "Yes, of course," he said, then changed the subject to talk about the history of the church.

At one point, the governor of Homs made an unannounced appearance, inspecting the interior and expressing his approval.

In the neighbouring ancient quarter of Hamidiyeh, dozens of residents tended to their dilapidated homes and shopfronts, despite strong gusts of wind that carried with them the choking dust of crumbled concrete and rubble.

Inside one gutted store, a man stood on a concrete slab that once served as a storage attic. He sifted through rubble, occasionally handing down a charred item to his colleagues bellow.

Down the street, someone beat a sofa with a stick, creating a cloud of thick dust. Around the corner, four men carried a large water tank. Women pushed broken baby strollers stuffed with sofa pillows and kitchenware.

"People come to check up on their belongings, they take whatever is salvageable from their home and, frankly, they often also take from their neighbours' home. It's free looting season," said Samer, who came back two weeks ago to check his home and the three storefronts he owns, all partly destroyed.

He and his wife and three children fled in February 2012, when a stray bullet grazed his young daughter's arm.

"We left that day and I told my wife to bring only one pair of pyjamas for each child. I told her we'll be back in a few days. But it's been more than two years," he said.

"Look, I still have my house keys, even though I no longer need them," he said, chuckling as he pointed to his broken down house door. His children's bunk beds were missing as were some wooden kitchen cabinets. He said they must have been used as fire wood during the winter by the rebels.

Samer was spending the night in his home in Old Homs "to keep watch" while his family remained in Mashtal Hellu, a once popular summer destination about a 30 minutes' drive away, where many Homs Christians own a second home.

Like others, he said he could not bring his family home yet because there was no water or electricity in Old Homs and schools and other services will take time to reopen.

In Old Homs, outside the ancient quarters, block after block of buildings has been utterly destroyed. Four, five or ten-storey buildings have collapsed, and hardly anything remains salvageable or even recognizable to locals.

"I kept referring to the map in my head, but I couldn't figure out which building that was," said Razan, a mother of three who was born and raised in Homs. Her childhood neighbourhood was taken over by rebels and bombarded by Assad's forces.

"One building, the roof was down and the roof-mounted satellite dish was in front of me at street level. And I thought and thought, then I remembered, there was a seamstress shop at that corner," she said.

Barely a five minute drive away, in the government-controlled neighbourhood of Inshaat, where many residents oppose the government and armed government men keep a tight grip on movements, hardly any damage was visible.

On the eve of elections, many people said they planned to vote because of rumours that non-voters will be marked for retribution.

"I don't know, so I plan to vote," said Razan, who opposes the government.

Her comment sparked a short debate with relatives who suggested that she could show up for voting and cast a blank ballet in protest, though no one could assure her that the authorities would not trace the empty ballot back to her.

Syria's Interior Ministry denied that identity cards of voters would be marked in any way, saying such rumours were aimed at "influencing the democratic atmosphere of the presidential election".

"My concern is more with how we can live together again," said Razan, who is a Sunni Muslim, referring to the sectarian rifts exposed by the conflict.

"We're afraid of the Alawites, and they are even more afraid of us," she said, before relaying stories of sectarian harassment, stories that are difficult to verify but have become commonplace today in many parts of Syria.

In Old Homs, Abu Walid, a Christian man in his mid-sixties, sat on a chair in a narrow street and stared at what used to be his stationery store. He was not sure about his future plans, whether he would rebuild or how he might pay for it.

"How will Syria come back?" he said. "In Syria, you have the Christian, the Shi'ite, the Sunni, the Alawite, and right now none will deal with the other. No one will work together. How will we rebuild?"