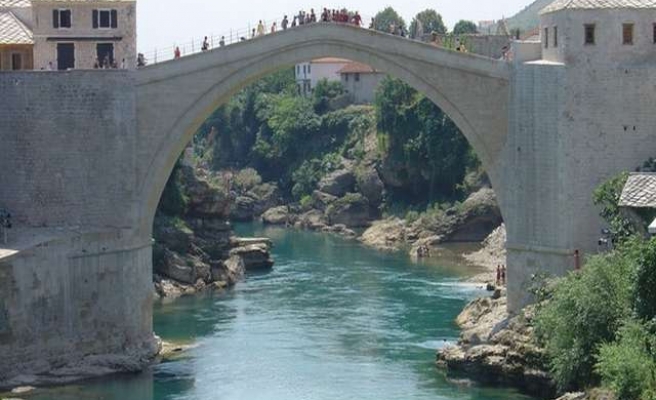 The front line in Mostar during the Bosnian war ran north-south, along a road parallel with the emerald waters of the Neretva River. Catholic Croats held the west and Muslim Bosniaks the east, much as they do today.

Under socialist Yugoslavia, the road was called Boulevard of the People's Revolution, but as the people splintered along ethnic and sectarian lines, so it became simply 'Bulevar'.

Two decades on, Bulevar remains an unofficial borderline between Croats and Bosniaks in a town that symbolises more than any other the dysfunction of post-war Bosnia.

Now, in a cultural centre built from the rubble of this road, there's again talk of revolution, with the revival of a discredited socialist phenomenon - the plenum - in a form a world away from the secretive party gatherings of yesteryear.

Each day for weeks now, residents - mainly Bosniaks but some Croats too - have gathered here in what they call a plenum, or citizens' forum, to vent anger at their elected leaders and at factory closures, lost jobs and unpaid wages.

"Our joint struggle shows that the spirit of a free Mostar is not broken," Karlo Grabovac, an unemployed computer technician, said. "Change is possible, but it cannot happen overnight. This is just the beginning of a painful awakening."

It's a model being replicated in towns across this country of 3.8 million people in the wake of violent protests in early February, when rioters gave voice to deep anger at the unemployment, corruption and political inertia that have dogged Bosnia since the war ended in 1995.

Many people inside and outside Bosnia hope it will enable Bosnians to cast off ethnically-based politics and fulfil their hopes of joining the European Union, which fellow-ex-Yugoslav republic Croatia did last year.

Dubbed the Bosnian Spring by some, a Balkan 'Occupy' by others, the movement is overwhelmingly Bosniak and has struggled to gain ground among Bosnia's Croats and especially Serbs, who were big winners in the peace deal brokered by the United States in the heat of battle.

Yet on Friday, around 2,000 people took to the streets in the main Bosnian Serb city of Banja Luka for the first time to demand better status for ex-soldiers, higher wages and pensions and revision of privatisation deals which led to factories closing amid allegations the new owners had siphoned off cash.

Politicians, particularly in the country's Serb Republic and in Croat areas of the Bosniak-Croat Federation in the other half of Bosnia, warn voters the plenums will rewrite the peace deal in league with Bosnia's Western overseer to their detriment. The protesters disagree.

"We are not destructive elements, we are not a threat to the integrity of the Serb Republic, we have not been instructed by international power centres," said Dusko Vukotic, president of the war veterans' association leading the Banja Luka protest.

"But we are raising our voices against crime and to defend our rights."

All participants are seeking change from the bottom-up, breaking with years of failed, top-down Western intervention.

An unprecedented experiment in direct democracy, it has already won results, from curbing official perks to persuading local assemblies to consider replacing local governments overthrown by people power with technocrats.

Plenums, launched by a group of young activists, soon drew people of all ages and walks of life. Pensioners, the unemployed, war veterans and young people come with ideas to make government become fairer and more efficient.

Ad-hoc working groups then draft a list of requests and forward them to the cantonal assemblies for consideration.

Most importantly, they have rejected the ethnic labels that have dominated Bosnian politics since the deal that ended the war split power between the three warring sides and sowed the seeds of the February unrest.

"A social revolution happened here," Igor Stiks, a Sarajevo-born writer and lecturer at the University of Manchester in Britain, told Bosnian state television.

"Changes will not happen quickly, there is no magic wand, but for the first time social issues have prevailed over the national. This is the greatest achievement."

While hundreds queue daily to take part in a plenum in the capital Sarajevo, it is Mostar that encapsulates the potential of the movement and the challenges it faces.

Divided since the war, Mostar has two electricity providers, two telephone networks, two postal services and two education systems, one for each side of the river in a town of just 72,000 people.

It is a system of divide and rule that feeds networks of political patronage, as ethnic-based parties dole out public sector jobs to the party faithful and their families, resisting outside efforts to reunite the town.

So it wasn't easy for Grabovac, born to a Croat family, to attend the mainly Bosniak plenum on Bulevar.

"I received so many threats," said the 50-year-old. "For me, there is no east or west Mostar, no Bosniak or Croat side. I feel no affiliation to any ethnic group. I'm just trying to heal this town."

Grabovac is one of a handful of Croats who participate.

That both sides of Mostar are dissatisfied was clear on the night of Feb. 7, when rioters torched both the HDZ party headquarters and that of the main Bosniak party, the SDA. Government buildings went up in flames in Sarajevo and other towns.

Initially, Croats joined the Mostar plenum in the wake of the unrest. But many dropped out due to intimidation.

"They tried to silence me, but they cannot stop me," said Josip Milic, a Bosnian Croat professor who was beaten with baseball bats by unknown attackers after attending the protests in Mostar.

The Mostar regional government has resisted calls to resign. But in other areas, the movement is already seeing results.

At the behest of residents, powerful local governments have fallen in Sarajevo, Tuzla, Bihac and Zenica, and cantonal assemblies there have accepted requests from plenums to form governments of non-party technocrats, though have yet to do so.

They also agreed to cut, from March, some of the perks enjoyed by public officials, such as the practice of paying elected officials for a year after the end of their term in office. In Tuzla they have already done it, saving an amount equal to the annual budget for culture and education.

In most towns, reviews have been ordered of the murky privatisation process, to many Bosnians an exercise in state-sponsored plunder.

Participants say their aims are limited to issues at the local level, but in many cases the problems they want to rectify have their roots in the labyrinthine system of power-sharing set down by the 1995 peace deal.

This feeds a public administration of 180,000 people, whose salaries account for more than a fifth of national output.

Ethnic checks and balances frequently paralyse government, deterring foreign investment and contributing to an unemployment rate of at least 27 percent.

The European Union, Bosnia's main sponsor and the bloc it aspires to one day join, says the system is unsustainable, but has for years been at a loss to change it.

"The fact that citizens have taken to the streets and a gathering in plenums to express their dissatisfaction shows that democracy has taken roots amongst the people," Bosnia's international peace overseer, Valentin Inzko, said on Friday.

"This is one of the most positive developments in the recent history of this country," the Austrian diplomat said.

With ethnically based political parties still dominating the political scene and elections not due until mid-October, it's too early to tell what role the forums might play.

But Drenko Koristovic, a former soldier out of work for the past 18 years now in the Sarajevo plenum, indicated some of those now in power may face a harder task at the polls.

"There is a drastic difference between the small circle of people that has robbed this country of its assets - and we know who they are - and 90 percent of people who have nothing to eat," he said.