Prison or stiff fines for ivory smugglers in Kenya

Kenyan authorities say a high demand for ivory has triggered an increase in illegal smuggling of elephants. 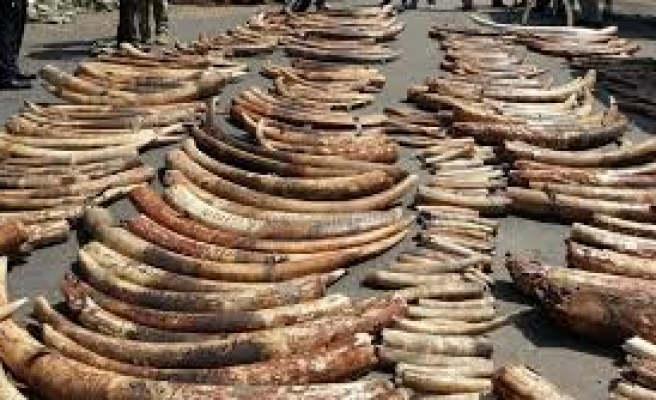 Wildlife authorities in Kenya say that a high demand for ivory in Asian countries, especially China, has triggered an increase in illegal smuggling and poaching of elephants.

But the authorities are optimistic that the newly-enacted anti-poaching laws that allow courts to impose stiff sentences on convicted elephant poachers, will in the foreseeable future stop the slaughter of the animal.

‘You can see, the laws are tough. Offenders are likely to feel the full impact of the anti-poaching laws. Without doubt, hefty fines imposed by courts on poachers and smugglers will deter them from killing the elephant,” Paul Udoto, official spokesman for the Kenya Wildlife Service that conserves wildlife in the country, told Anadolu Agency (AA) in an exclusive interview.

Udoto’s remarks come less than a month after a Kenyan court jailed a Chinese smuggler for seven years when he failed to pay a fine of $240,000.

Tang Yong Jian was convicted on charges of illegally possessing and trading 3.4 kilograms of ivory.

He became the first foreigner to be convicted in Kenya under the tough new anti-poaching law which came into force last month, twenty-five years after the ivory trade was made illegal in the East African nation.

“It is gratifying and important to point out that after many years of pushing for stiff penalties on poachers, these very penalties are now in place,” Udoto said.

He predicted that in the next few months, cases of poachers and smugglers may, as he put it: "be consigned to oblivion."

Over the years, elephants have been a tourist attraction in Kenya. Official Wildlife statistics released last year reveal that the Kenyan government earns revenue totaling $1.5 billion US dollars annually through tourism.

The statistics also show that currently Kenya has an elephant population of approximately 30,000.

Eleven thousand of the elephants are in Tsavo, one of Kenya’s vast national parks, located in the south-eastern part of the country.

The destroyed ivory items, reportedly representing 2,000 killed elephants, were seized from smugglers, traders and tourists after the global Convention on International Trade in Endangered Species, (CITES) banned ivory trade in 1989.

Earlier this week, in what conservationists have described as a strong signal in the fight against elephant poachers, the British Royal family announced that it plans to destroy some 1,200 ivory items in Buckingham Palace, the official London residence of Her Majesty The Queen.