'Rabaa sign' becomes the symbol of massacre in Egypt

“Rabia sign” made by raising four fingers has become the symbol of the massacre in Egypt and Rabaa al-Adawiya Square where the anti-coup protests take place. 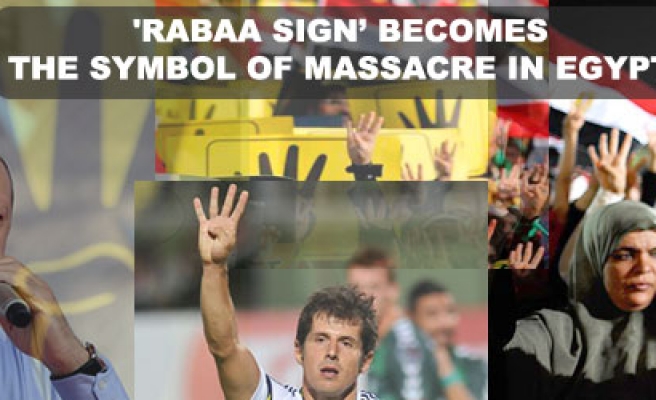 The 'Rabaa sign' has become the symbol of protests against the military coup in Egypt and the center of the anti-coup protests, Rabaa al-Adawiya Square.

Made by raising four fingers with the thumb resting on the palm, the sign has come to represent civilian demonstrations protesting the ouster of Egypt's first democratically elected president Mohamed Morsi and the ensuing violence that killed hundreds of people.

Rabaa means four or fourth in Arabic. Just a few hours before the massacre on August 14, anti-coup protesters in Egypt were struggling to voice their demands to the world by raising their four fingers.

Rabaa al-Adawiya Square is now as famous as Tahrir Square in Cairo due to the resistance it hosted by hundreds of thousands of protesters for more than two months. Last week, the square witnessed some of the worst atrocities against civilians in recent years.

Turkish Prime Minister Recep Tayyip Erdogan also flashed the Rabaa sign during a rally of his Justice and Development (AK) Party on Saturday in the northwestern province of Bursa.

Turkey has emerged as one of the fiercest critics of the July 3 ouster of Morsi by the powerful Egyptian military. Ankara has described Wednesday's violent crackdown on two major anti-coup sit-ins in Cairo's Rabaa and Giza's Nahda squares as a "massacre".

Rabaa al-Adawiya Square was named after a religious woman called Adawiya. Since Adawiya was the fourth child of the family, the Arabic adjective rabaa was affixed to her name.

The significance of the name is said to come from Adawiya's struggle for freedom all her life. Now with the anti-coup protests, the meaning of this name has given birth to a new symbol.

Anti-coup protesters use the Rabaa sign both as a reference to the name of the square and to distinguish themselves from pro-coup protesters in Tahrir Square, which prefer the internationally popular "V sign" for victory or peace.

The Rabaa sign has gradually risen in popularity in Egypt during the protests and eventually come to be used as often as the V sign.

The anti-coup protesters say that the Rabaa sign, besides being the symbol of demonstrations, carries some other meanings as well.

It obviously refers to the square, and distinguishes it from Tahrir Square that housed the supporters of the military coup. But the sign also refers to the deposed president as the fourth president of Egypt after Nasser, Sadat and Mubarak.

Hi, we are Egyptians, and we do not support Morsi at all, if you were here the last couple of days you would have known the truth, but as always, the media controls what the world sees, the truth is MB are terrorists, they killed more than 50 cops and burnt more that 50 churches in 4 days, wake up..

We are Bangladeshi .........we directly support Md. Morse as he is honorable and dearest leader not only for Muslim but also all the peaceful nations...........We are against genocide as well as any mass killing .No matter is where it happens and how it happens plus who is responsible for it ......in a word,We are against any type of tyranny.So Plz STOP genocide across the world.

Salam, I am from pakistan, and this is to inform all of you that majority of pakistani Muslims are in solidarity with the peaceful protesters of Tehrir square, we totally condemn the brutal inhuman actions of military, elected govt of Morsi should be back. InshaaAllah. Hearts are with you O Muslims of Egypt.. & and we know well Muslim brotherhood with all of their positivity & struggle.

To all of the "pro-coup" propagandists, it is inevitable that the secular Egyptian "junta class" is seeing its last days in power. The MB has seen this movie before. It's a shame that the western backed heretical Arab thugs in Egypt & "saudi" Arabia have yet to acquaint themselves with the end of this episode. But we shall all live to see it inshaAllah. Peace be upon us all.

As humans, not just muslims, we should condemn any genocide, whether it be from Army/Government, or any other party.innocent people are being attacked/caught in the cross fire.

Morsi and MB FTW. the army must step back and let a democratic govt complete its tenure. If you don't like Morsi, den just deal with it. He got the Votes, he got there legally. Should complete his tenure and den run for election and let the ppl decide. Its just the opposition hungry for power;so hungry its allowing the army to kill its own people. Thats sad and I'm with Morsi. Learn from Pak coups

we are with muslim brotherhood and suppory morsi......and insha allah MB will again come in power