Remembering 30 years of pain in Bhopal 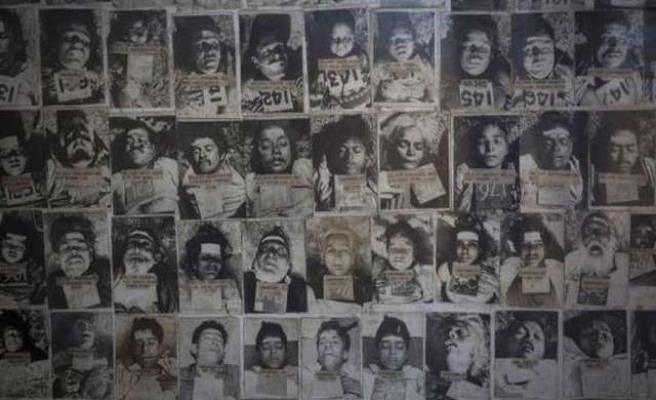 The night of Dec. 2 1984 permanently marked the lives of the residents of the Indian city of Bhopal. Gas leaked from the Union Carbide-owned pesticide plant and killed 3,500 instantly, thousands more in the following months, and leaving a residual effect that affects children born 30 years later.

Along the corridor of a rudimentary rehabilitation center, women in saris and burkhas sit cross-legged on a red and white tiled floor, rocking children with twisted limbs and clawed fingers in their laps.

The children - ranging from 2 to 12 years old and dressed in grey, white and red checked uniforms - look up wide-eyed, moaning and grunting, unable to speak or move due to illnesses such as cerebral palsy, muscular dystrophy and Down's syndrome.

"I've been coming here for the last six months. I want my son to be cured and to be able to walk and run like other boys," said Lakshmi, 40, cradling her 7-year-old son, Vikas, who suffers from muscular dystrophy and speech impairments.

Vikas and hundreds of children like him are part of a legacy left by one of the world's worst industrial disasters, activists say, neglected by the state but given hope by a charity set up by two women survivors of the manmade calamity.

As survivors of the disaster gather to hold candlelight vigils and protests in a bid to galvanize support for victims on the disaster's 30th anniversary, the city's second and third generations of disabled children stand out in their demands.

"The government and Union Carbide have done little to recognize these children as part of the disaster, so we felt we had to do something," said Rashida Bee, one of the women who founded the Chingari Rehabilitation Center.

Bee, 57, met Champa Devi Shukla, 60, through a government-run employment scheme for women survivors in the months following the disaster.

They slowly became friends, she said, sharing the suffering of their families and memories of that fateful winter night when the factory's siren blared as they slept in their homes in slum colonies surrounding the factory site.

"We woke up with our eyes and throats burning. My young son was screaming, 'Who has burned so many chillies?' He was gasping and choking at the same time," said Bee.

"We had no idea what had happened until our neighbor came and told us to leave because of the gas leak," she said, noting that she lost six family members to illnesses such as cancer in years after the tragedy.

Shukla told a similar story, adding that her family fled their home to get a bus out of the city - but there were so many people running and screaming, and no transport available.

"My husband, who had fallen and hurt himself in the stampede, couldn't move quickly enough. He told me to take the children and run, but I said, 'If we are going to die, we will die together,'" Shukla said.

They survived the immediate disaster, but like Bee, in the years that followed, Shukla lost her husband and three children to cancer. Her granddaughter was born with a cleft palette and mental disorders.

The two women said they felt a sense of injustice over the lack of rehabilitation given to victims of the disaster, and began a campaign for better support for those suffering the aftermath of the gas leak.

In the beginning, they mobilized about 100 women and walked 730 km (455 miles) to Delhi to protest the lack of livelihood opportunities for women like themselves who had to become breadwinners for their impoverished families after their husbands became ill.

Over the years, their attention turned to second- and third-generation children with congenital deformities, born to survivors exposed to the gas and to women who have been drinking water contaminated by undisposed toxic waste around the factory.

However, there has been no long-term epidemiological research to prove conclusively that the birth defects of these children are directly linked to the tragedy three decades ago.

"Please don’t ask me about this tragedy. I know nothing is going to change. I have lost so much, who cares about me? I suffer every day. I even beg for survival.

"What will happen if you publish my story in a newspaper? Will someone come to help? Will it change my life?

"I know there are some good people still in this city. They are the one who help and that is why I am alive. I lost my son and a daughter and later on even my husband left this world. Many times I thought about killing myself, but what will happen? People like me would still suffer in this city."

"It was the night I would like to forget. When the gas leaked, everyone was running on the road. No one was knowing what had happened. I could see people falling unconscious on the road. I also left my house along with my family members but later on realized that I am running only with my younger son.

"I could see many dead bodies on the streets. I lost my wife, daughter and elder son in the tragedy. I also inhaled the toxic gas but I was lucky and I survived.  Almost all of my family members lost their lives except my younger son. However, life became a burden after that night. I had seen so many of my close ones dying in front of me. After almost 11 years even my younger son died and I was left alone.

"I am still facing the most difficult time of my life with no money, as I have not received pension for the last four months. I hope that the situation for me should improve at least at this age. I know I am not alone in this struggle, there are many people like me in this city, who have lost everything."

"I was living very close to that factory. I don’t know how I survived that toxic gas. I lost my daughter in the tragedy. She was eleven years old at that time.

"I still remember her she was very beautiful. Had she been alive, she should have many children by now. But you cannot change your destiny. Every year this day reminds me about her. How can I forget her? That night has changed my life for ever. I don’t want to discuss any more about her.

"I still suffer from various diseases and no one is here to help me. In the last few months I have not received any pension from the government. I don’t know how I will survive if they don’t give us pension. I am hopeful that those responsible for our condition will be punished. God will punish them. I don’t know whether I will be alive to see that."

"We were living at JP Nagar, which was barely few meters away from the Union Carbide plant. Me and my child inhaled toxic gas that night.

My granddaughter was born disabled, that is something which really disturbed me. I always feel that the government has not done enough for gas affected people. Those who were responsible for this tragedy have yet to get punishment.

I don’t think they will ever be held responsible for this tragedy. You can just imagine about this country, where people go scot-free, even after killing thousands of people. "

Inside the Bhopal gas tragedy factory

Where they have been left to ruin, industrial-sized tanks and cylinders are covered in rust, pipes have corroded, overgrown vegetation limits movement. Thirty years later, the pesticide factory once owned by U.S. company Union Carbide still remains in the central Indian city of Bhopal, a reminder of one the world's worst industrial disasters.

The stench of chemicals lingered in the air when Anadolu Agency's reporter visited, days before the 30-year anniversary of the tragedy on Wednesday.

A guard at the site says some tanks retain toxic chemicals; mercury deposits can still be seen around the tanks and cylinders.

“We are here for the security of this plant, which has destroyed the life of so many people in this city. We feel bad as there is nothing in this place, but still we have to be present here," says a guard, who cannot be named. "We wanted the place to be converted into something that would help people forget about that tragedy.”

Its presence has become an everyday fact of life for the neighboring slum, which is separated from the factory site by a simple wall. In some places, bricks have been removed to make pathways. Local people, especially children, often pass through the factory to play, defecate, or simply as a shortcut on their journeys elsewhere.

“We still remember that night and the hardship we have gone through because of this factory. We can’t do anything against the factory. We are too poor to do anything. We expect our government to do something for us. They have deceived us. Our life is worth few thousand rupees for the government,” said Azra, who lives near the site.

Toxic waste remains a major issue for Bhopal's gas-affected population. It remains at the site, in sacks locked inside the plant's warehouse.

The Madhya Pradesh state government took control of the almost 90-acre Union Carbide site in 1998 but has since done nothing other than erect boundary walls. Both Indian and international organizations estimate a clean-up would cost millions of dollars because surrounding groundwater and soil is laced with carcinogens. In 2012, the Supreme Court of India ordered the state government to dispose of the 350 metric tonnes of toxic waste but efforts have repeatedly failed.

For local residents the continued presence of the factory and its toxic contents are a persistent reminder of the tragedy.

“I don’t want to discuss this issue anymore. Every day this factory reminds me about my wife," says Irfan Khan, whose wife died in the accident. "I think it will remain here for ever. We have lost everything and government is simply not interested in our problems. By now they should have converted it into a hospital or a museum."