Robert Frager on psychology from viewpoint of Sufism 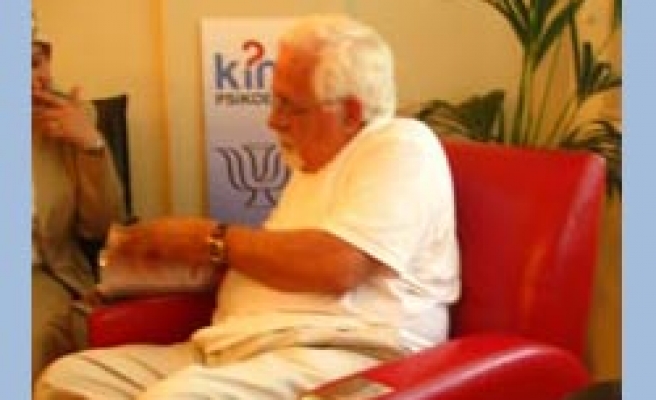 Psychology and Sufism, both investigates for the inner mysteries of humans and suggest some ways to help them improve their lives. Robert Frager, who has both, Sufi and psychologist hats, evaluated human growth comparatively.

Founder of the of in , Professor Frager, paid a visit to his wife’s country, . So, we can find an opportunity to meet him. We have too many question in our minds to a man who is a Sheikh, a spiritual guide and also psychologist; but we had to be quick because of a time lag.

He has spent his years in mystic path of various traditions from East to West until he met a Turkish Sufi Sheikh Muzaffer Ozak. Than, he choose to become a Sufi Dervish. During years in searching he perceived the spiritual need of an individual is as important as his other aspects, that modern psychology focus on, for personal development and change.

Change, what the Freudian approach nearly avoids, is the basic concept of the young Transpersonal Psychology (formally founded in 1975), according to Frager who exemplified the caterpillar’s adventure. A caterpillar, which has no idea about being a butterfly, spins its cocoon, Frager told the audience, the young and enthusiastic Turkish psychologists in a speech just several minutes after our interview. It loses everything (its form!) that it had before in this cocoon where it has still no idea what is happening. It achieves a new form and becomes a butterfly after all this process. Being in a cocoon can be very very hard, Frager told us after our interview; however, it can be more difficult without knowing what happens.

Wearing white shirt and cute eyeglasses, he told us in a very smooth appearance that: “Today’s psychologists are interested in the caterpillar!” “They don’t see the other side of the process, becoming the butterfly,” he said, “so, they can think that the client is in depression.” However, self also changes like a caterpillar. People experience death and birth many times whereas the caterpillar has only one chance for rebirth! Transpersonal psychology that has still developed, try to look at whole process, Frager emphasizes.

WB: What do Sufi experiences add a person's worldview, and a person's coping abilities with daily problems?

R.F.: Well, as I said earlier, I think Sufism works, has an affect when people are better fathers and mothers, husbands and wives. People's hearts open. And they are kind to each other. These are our foundation for everything. And I see people really grow, they become more mature. They have more faith, you know, more sensitive “tevekkul”, “tavbah” (pledge from Allah) they really repair their mistakes... To me there is a very real that they are not dramatic. But, I think “not dramatic” is better than dramatic. Because the ego, “nefs”, loves dramatic, loves drama. Typically terrible facts: dramas. Is that making sense?

WB: It is interesting to hear the relation between nefs and dramas.

R.F.: Also, I often ask my Dervishes: “What happens during Ramadan? Why is Ramadan such a gift?” What happens during Ramadan is “Nefs” as we struggle every day. It says “Feed me! Give something to eat! I'm hungry! I'm thirsty!” You know than they get very clever. You have to do it because you are working. You know, they come up with all very clever arguments. And so highly would you know what than happenings? We handle it saying “No, it's Ramadan. I'm not forget it!” Nefs tries but than gets figures out. No chance! It's Ramadan. There are not gonna eat, there are not gonna drink until Iftar.

So, than the nefs says “You are fasting but she is not fasting! You are better than her. Well you are fasting, maybe you should tell people it works that you are fasting.” You know all ?percent? to feed our pride. And it's hard. Because you fall for that one. “Oh, look at that! How can they do that? They are drinking. I'm fasting.” So, even if we fight the nefs saying drink and eat, we fall enter this other trap: Proud. So that's why, same thing, some people compound the Dervishes. (So, same thing, it happens among Dervishes.) “Oh I do remember Allah. They don't remember.”

WB: What are the essential differences between guidance manner of a Sufi path / Sheikh and psychotherapy?

The one big difference between the guidance that I do as a Sheikh and as a spiritual guide outside. As a Sheikh, I represent the tarikat and I represent the Sharia, also. And so I have to answer people. I can't say “Tell me what you believe! Oh people .. oh that's nice...” You know, I have to say “No I'm sorry that's haram.” Sometimes I have to say to my Dervishes I have to tell you “According to the Sharia, that's not allowed. You have to make your own decision.” I won't tell someone “You can't.” Because the people have to make their own decisions. But I would thell them “According to Sharia, that's false.” Whereas, usually, as a therapist you don't do that.

WB: So, these are the main differences between them.

R.F.: Yes. Sometimes you say “Enough!” “Yeter!” (enough in Turkish) (He laughes) It is much more directive. That's haram. Sometimes there is a shake I will say enough. Almost never do that as a therapist.

“In many ways, how can they (the therapists) help someone with faith when they don't have faith.”

WB: I want to ask something from the side of the clients. In Turkey, devoted people don't want to go a therapist. Because they think that a therapist from another worldview can not help theirselves.

R.F..: Right... exactly... They are half right. Something with therapist can help even they are more secular. There are something. But in many ways, how can they help someone with faith when they don't have faith.

R.F.: Yeah. That's why spiritual guidance would be good. In Unites States many people think they should go to someone who cares about the spirituality. But therapist had no training. In regular therapy there is no training of spirituality.

“Everybody is searching for Allah whether they call themselves as Muslims, Christians, Jewish or secular. Everybody has that same Ruh (Soul). Never said Allah choose the Ruh the one person up to another. I think we are all searching for Truth for Ya Hakk. Whether we know or not…”

WB: And another question from the side of other clients, for instance, more secular clients... Can they get some help from the transpersonal psychology, if they choose?

R.F.: The deeper question is “Are they ready to work with a spiritual guide?” You know I think everybody is searching for Allah whether they call themselves as Muslims, Christians, Jewish or secular. Everybody has that same Ruh (Soul). Never said Allah choose the Ruh the one person up to another. I think we are all searching for Truth for Ya Hakk. Whether we know or not…

“Wait wait! What do you mean by ego.”

WB: In modern life, there are some favorite concepts or notions such as strong ego, self-confidence and the other things that people want to own them. For a client who thinks with these concepts so far, is difficult to discover and disclose his spiritual aspects?

R.F.: It is very big paradox: What is ego? Every psychologist defines differently. You know, so, when you say “ego strength”, “self confident” that one thing, you know, when it seems the opposite when you say “humility”. The gap is there.

But, they are two different concepts.  So, that’s why in English, I, instead of saying ‘ego’, I usually say “narcissistic ego, self-centered ego”, you know that that is a particular kind of ego, leveller ego. It is not the same as ego strength, it is very different.

I did an interview in a magazine about spirituality. It was on ego. They ask spiritual teachers, they ask  regular psychologists, they ask transpersonal psychologists, and they ask me. It was a very funny interview, because, called the man had two hats, am I psychology hat, am I sheikh hat? (he laughes)

What was fascinating was everybody interviewed, they are all know, you have to kill the ego,  you have to build up the ego, ego was bad, ego is important, but nobody ever say; “Wait wait! What do you mean by ego.” So, of course they were talking about something different.

WB: And, after all, does a therapist who uses transpersonal approach, have to follow a Sufi path or another spiritual guidance?

“It (“Ruh” in everyone’s hearth) is that everyone has what Jung called ‘the Self’. The same thing… Everyone has wisdom within them, everybody has knowledge within them. But the neurosis is like a veil over those things, but it’s not real, it is never over.”

WB: What are the prominent features of transpersonal psychotherapy in comparison to other approaches in psychotherapy?

R.F.: Well, I think, transpersonal psychotherapy begins with the understanding that we just talked about the “Ruh” in everyone’s hearth. It is that everyone has what Jung called ‘the Self’. The same thing… Everyone has wisdom within them, everybody has knowledge within them. But the neurosis is like a veil over those things, but it’s not real. So, the job of the therapist is to uncover what is real in person which is their spirituality.

The psychotherapists, I think, often get stuck with the neurosis. I mention last week, you know, Freud’s very famous example, someone asked when is psychotherapy over? And he said, well, either when the patient dies or the therapist dies. Because, all you think about is neurosis, it is never over. There is always gonna be something more cleaned up, but, I think it is endless cycle, I think transpersonal psychology has the notion that there is health in the person. You know, there is wisdom, there is a soul. You look carefully Freudian, there is no place for that in Freudian psychology.

I mean there is id which is all place of the body and drives, there is the ego which moderates  the drives and serves the id, there is the superego which is neurotic. But where is the self? Where is anything healthy? Non of those three is healthy. Look carefully! And so there is an endless struggle. You know, it is like inner ‘jihad’.

But, you know it is Freudian ‘cihad’, it is not the ‘jihad’ of Resullallah (s.a.v.). Different things! So, you know, I think, unconsciously that is their traditional therapy, there is a kind of pessimist to put it technically, if you look at ‘object relations’ for example, they say  in a sense there is a hole that never can be filled up. You try to fill it up, taking this, taking that... It is fundamentally endless vacuum, endless hole. That's negative side of the Freudian psychology. Another modern interpretation of it. We think there is not a hole, there is light, there is ‘nur’. Big difference!

WB: Thank you for the interview.

Frager is very important specialist in transpersonal psychology. İt was very beneficial. Thanks to World Bulletin and Miss. Ulusoy & Miss. Bektasoglu for this nice interview.

Thanks for interview with Frager... celebrate for good ask...

Thanks so much for posting this interview. I was searching for references on psychotherapy from a Sufi perspective, and was led to Robert Frager's work, and then this interview. I didn't know he is a Shaikh and the founder of the School of Transpersonal Psychology!