In portraying the legal system as broken, Sarkozy is borrowing a tactic used in the past by his rivals on the left 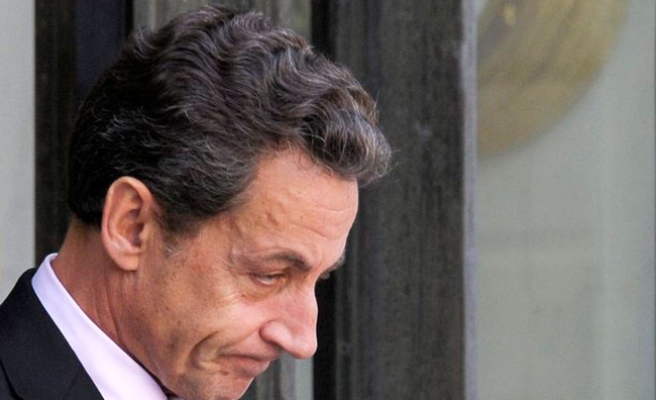 In accusing magistrates of persecuting him, former French president Nicolas Sarkozy is taking on an old enemy in a fight that could hurt both politicians and judges, fuelling a sense of public disenchantment with France's ruling elite.

Sarkozy's hopes of winning back power suffered a heavy blow when, after 15 hours in police custody, he was placed under formal investigation on July 2, suspected of using his influence to gain details of a probe into his 2007 election campaign.

Now targeted directly or indirectly in six investigations, he has fought back with accusations that the magistrates leading the current case are pursuing a political vendetta against him.

It is a risky strategy, given that most French appear to be satisfied with the legal system and polls show two-thirds believe the conservative ex-president has been treated like any other accused.

Already the far-right National Front, which topped the polls in France at May's elections to the European Parliament, is seeking to capitalise on the Sarkozy affair as further evidence of something rotten at the heart of the political establishment.

Eighty percent of Sarkozy supporters suspect political machinations in his latest case. But in a sign of shared concern about the risk of poisoning public trust, senior figures from both the UMP and the Socialists have cautioned against raising concerns about the integrity of the judiciary.

In portraying the legal system as broken, Sarkozy is borrowing a tactic used in the past by his rivals on the left. It harks back to a belief dating from the time of 'Sun King' Louis XIV that judges are subordinate to "the noble power", in other words the executive, said Didier Rebut, a law professor at University of Pantheon-Assas in Paris.

Christophe Regnard, head of the USM judges' union, said the justice system is an easy scapegoat for politicians from all camps "for pure political interest."

"Now it's the right attacking the justice system but a few years back it was the left," he said.

The very fact that judges can join trade unions is a peculiarity of the system that makes them vulnerable to political attack.

Saying his arrest was driven by a "willingness to humiliate" him, Sarkozy questioned how it was fair that one of two judges in his case belonged to the left-leaning Syndicat de la Magistrature (SM), whose "political obsession is to destroy me."

He has shown no evidence of bias by the judge, and the SM union called his attack a classic diversionary tactic.

But colouring the affair is the fact that the SM, which represents 25 percent of judges, spoke out against Sarkozy during the campaign for the 2012 election, which he lost to Hollande. More compromising still was the discovery in its office last year of a "Wall of Idiots" photo collage of mostly right-leaning politicians, including Sarkozy.

"He could very well believe that he wasn't judged purely on what he did, but also on who he is," said law professor Rebut. "The fact that he could think that poses a problem."

Eric Ciotti, a deputy from Sarkozy's fractured and indebted UMP - which faces its own legal inquiry into an alleged financial cover-up - has proposed a bill forbidding judges to join unions.

But legal experts believe it unworkable, given that the right to union representation is protected by the constitution - only soldiers cannot belong to one.

"When politicians, whether on the right or the left, start lashing out at judges ... it's the country that suffers," its president Jean-Louis Debre told Europe 1 radio.

At the heart of the dispute is the powerful role of France's independent investigating magistrates, who combine aspects of the roles of judge and cop - a key feature of an inquisitorial justice system that contrasts with the accusatorial Anglo-Saxon model.

Rather than acting as pure arbiters, they take an active role in the search for justice, gathering evidence on behalf of each side and determining whether it is solid enough for a trial. If they bring charges, the case goes to court under a separate judge.

They are intended to be a counterweight to prosecutors, who are also judges and under the authority of the justice minister.

Investigating magistrates are used in only about 5 percent of cases, the most complex or sensitive, and where possible they work in groups to avoid a perception of unlimited power.

Supporters say this dual role of investigator and judge puts greater emphasis on the discovery of the truth, as opposed to victory for one side or the other. They argue it costs less for victim and accused, and means cases are less likely to be decided by whose lawyer performs better in court.

As president, Sarkozy tried in 2009 to replace investigating magistrates with prosecutors, but failed after judges called it a veiled attempt to muzzle the judiciary.

His battles with judges go back to 2002, when he was interior minister. As part of a "zero-tolerance" policy on crime, he called them lax, once saying a judge "should pay" for freeing a man from prison who went on to kill again.

Controversy was further fuelled by a legal debacle in 2004-2005, when wrongful prosecutions in a high-profile child sex abuse case were partly blamed on an inexperienced investigating magistrate, working alone.

A 2007 reform requiring them to work in groups has been delayed three times already, due to strained resources.

Prosecutors too have been censured by the European Court of Human Rights, which said in 2010 their link to the justice ministry does not conform to norms of impartiality.

Meanwhile, two reforms Hollande promised during his campaign - to change how prosecutors are nominated and dissolve a special court for ministers that critics say is too soft - remain unfulfilled.

Parliament did pass a bill brought by Justice Minister Christiane Taubira to end that ministry's practice of passing down instructions to prosecutors in individual cases.

But the fact information can be shared in the other direction has allowed Sarkozy to accuse Taubira of lying over what she knew about the tapping of his telephone during the investigations against him. She denies this, saying she was not told about the date, length and content of the surveillance.

Regnard, of the judges' union, said such fingerpointing would continue until France fixed the weaknesses in its system - and this was unlikely without new censure from the European court.

"Nothing good will come of this," he said. "What would be good is if we came out with real reform to make the justice system and prosecutors independent."