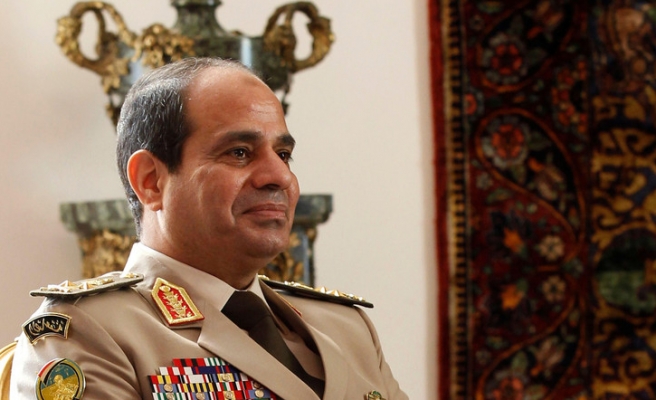 Opponents of Egyptian army chief Abdel-Fattah al-Sisi – widely seen as the prime force of last summer's ouster of elected president Mohamed Morsi – appear to have their own reasons for welcoming a widely-anticipated presidential bid by the top general.

"If al-Sisi wins elections, it would actually make it easier to topple him," lmam Youssef, leading member of the National Alliance for the Defense of Legitimacy, Morsi's main support bloc, told Anadolu Agency on Friday.

"An al-Sisi presidential bid will constitute proof that he staged the coup [against Morsi] because he wanted power himself," he said.

"Moreover, as head of state, al-Sisi would be responsible for the country's myriad problems, quickly earning him the contempt of the people and making it easier to topple and prosecute him once he's no longer defense minister," added Youssef.

Amid a widening police crackdown on critics of Egypt's military-installed interim government, opposition to al-Sisi has expanded to include groups that initially supported last summer's anti-Morsi protests that ultimately led to his July 3 ouster by the military.

He argued that such a move would expose before the public "the brutal rule of the military and the remnants of the Mubarak regime."

Maher, whose 6 April group played a key role in the January 2011 uprising that toppled long-serving president Hosni Mubarak, criticized secular parties that supported the notion of an al-Sisi presidency.

"Liberal and leftist parties that supported al-Sisi in order to obtain government positions will be the first to be sidelined by holdovers from the Mubarak regime," he asserted.

"The army controls everything in Egypt from behind the scenes," Maher added. "Even during Morsi's single year in office, the military empire remained untouchable."

"Why must they rule from behind the scenes?" the detained activist asked. "Let them run a blatant military dictatorship and let's see how they solve Egypt's social and economic problems and guarantee freedoms."

Following the announcement, Egypt's Supreme Military Council issued a statement voicing its approval of a possible al-Sisi presidential bid "in response to the demands of the people."

A date for presidential polls has yet to be announced, but they are expected sometime within the next few months.

Egypt's Popular Current has said that founder Hamdeen Sabahi's presidential bid is still "under consideration", denying an earlier report by an Arab newspaper that the leftist politician had dropped down plans to run for president.

"There is a strong trend in the Current and among revolutionary circles on the need to field Sabahi in the presidential elections as a candidate of the January 25 revolution," the Current said in a statement.

The London-based Al-Hayat newspaper reported Friday that Sabahi had decided to drop his plans to run in the next presidential elections, the first after the ouster by the army of elected president Mohamed Morsi on July 3, to avoid divisions among backers of the military and the January 25 revolution, which toppled strongman Hosni Mubarak in 2011.

The presidential elections should have been held after the parliamentary elections under a roadmap announced by the army for Egypt's political transition following Morsi's overthrow.

But last Sunday, interim President Adly Mansour amended the roadmap to open the door for holding the presidential elections ahead of the parliamentary polls.

Sabahi came third to Morsi in the 2012 presidential elections.

"The current situation makes it necessary for us to start serious dialogue on partnership for the creation of a better future for this country," it said.

Sabahi said earlier that he is ready to back al-Sisi provided that he does not reproduce the Mubarak regime if he comes to power.