The Sunni alliance in Iraq, which aims to topple Shiite-led government’s leader Nouri Al-Maliki, is expected to fall apart 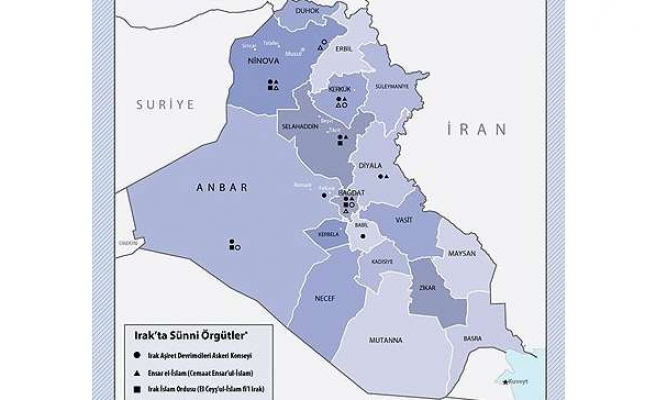 The Sunni alliance in Iraq, which aims to topple the Shiite-led government’s leader Nouri Al-Maliki, is expected to fall apart, according to a report by an Ankara-based think tank.

The report released last week by the Foundation for Political, Economic and Social Research (SETA) states that a possible power struggle may arise as the "pragmatic alliance" formed between the Sunni groups is not a strong one.

Assistant researcher at the Foundation and international relations expert Can Acun, who authored the report, told the Anadolu Agency that the insurgency in Iraq should not be seen through the sole prism of the Islamic State of Iraq and the Levant (ISIL).

Other armed groups active in Iraq should also be taken into consideration as they hold influence in the field despite the fact that they are not as "professional" as ISIL in terms of commanding and fighting skills, said Acun.

ISIL, a Sunni rebel group fighting in Syria, captured Mosul, Iraq's second-biggest city, on June 10 with the help of other Sunni tribes in the region.

The Islamic State of Iraq and the Levant (ISIL), which has claimed control of mostly Sunni-populated Iraqi provinces, including Diyala, Nineveh, Salahaddin and Anbar, has favored a strategic cooperation with other Sunni communities, for instance with former supporters of the toppled Iraqi leader, Saddam Hussein.

Acun stressed that ISIL's demand for obedience from other groups lays ground for a wider conflict and further clashes, especially since the group changed its name to Islamic State on June 29, creating a caliphate -- which stretches from eastern Iraq to parts of Syria -- and appointed its leader, Abu Bakr al-Baghdadi, as the "caliph", leader of the Islamic world.

Another Sunni group, Ansar al-Islam, an Al-Qaeda offshoot, which gained control of certain areas near Kurdish regions, constitutes a growing threat to ISIL as the two have been known to rival especially after the withdrawal of the U.S. army from Iraq.

According to the Foundation’s report, ISIL has killed militants of Ansar al-Islam in Mosul. However, the group remains cautious vis-a-vis ISIL, avoiding clashes -- a strategy widely shared among most lesser-known different Sunni groups -- as they run the same agenda towards the Shiite-led Maliki government.