Syria crisis: Will the 'war crime' be prosecuted? 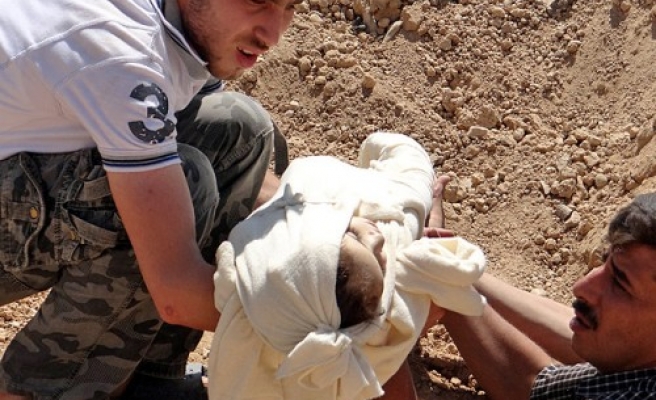 At a time when world leaders are gripped by the puzzle of how to deal with Syria's chemical weapons, the question remains of how to bring those who used them to justice.

The United Nations chemical arms inspectors presented a report on September 16 that concludes "unequivocally and objectively" that chemical weapons have been used in Syria.

UN Secretary General Ban Ki-moon described the August 21 poisonous gas attack that killed nearly 1,500 people as a "war crime," without putting the blame on Bashar al-Assad's regime or the opposition.

Ban condemned the attack and said the international community "has a responsibility to hold the perpetrators accountable."

The International Criminal Court (ICC) is the supranational authority to prosecute war crimes, but bringing charges against those responsible for the attack requires action from the UN Security Council.

"Legally, the Security Council will have to refer the situation in Syria to the ICC since Syria is not a party to the court," said Andrew Thompson of Waterloo University, Canada.

"To do this, both Russia and China will have to refrain from using their veto," he said.

The chemical weapons attack drew strong reactions from the international community with the US and its allies showing a clear intention to conduct punitive military action against Assad's regime, which they blame for the deadliest chemical weapons use in a quarter century.

Determined as he was to uphold international law on chemical arms, US President Barack Obama still appeared to be on the fence when he made the surprising decision a week into the incident to seek Congressional approval for a US-led response, even though he was constitutionally entitled to proceed without authorization from Congress.

Russia's sudden intervention last week meant Obama would not have to decide, as Washington and Moscow agreed on a diplomacy move to strip the Syrian regime of its gas stockpiles, effectively sidelining the military strike option.

Whether the diplomatic initiative could be expanded to conclusively determine the perpetrators and eventually hold them accountable seems to hinge on the Security Council's ability to unite around the cause.

Anthony Smith, professor of political science at the University of California-Irvine, said the political reality points to a Russian veto on any possible referral to the ICC, which he calls a "perfect place for the investigation and potential investigation" of the attack.

However, Russia might have a change of heart if the deal it struck with the US on destroying Syria's chemical arms backfires, Smith said.

"If Assad embarrasses Russia through non-compliance with the deal to identify and surrender the chemical weapons, then it might be that Russia embraces a referral to the ICC in order to wash its hands of Assad's assumed bad behavior.

"The US has continued to assert that a military option is still viable, so Russia may choose to opt for the prosecutorial and diplomatic option of a referral to the ICC rather than engage as an apologist for Assad's use of chemical weapons."

Anthony Dworkin from the European Council on Foreign Relations, a London-based think-tank, suggests a hard-to-avoid tradeoff between removing Assad from power and pressing charges against him.

"It seems certain that any peace deal will require a political transition plan in which President Assad offers at some point to leave office voluntarily," Dworkin said.

"It is hard to believe that Assad will not be in a strong enough position to demand security from prosecution."

"Western officials who favor referring Syria to the ICC should at least think carefully about how such an agreement will proceed, and what role the West could have in supporting it, if Assad and some of his senior officials were facing arrest warrants for war crimes and crimes against humanity," he said.