"A favourable rain season like this year would have produced 4 million tonnes before the crisis, covering the country's annual consumption," said a regional commodities trader said. 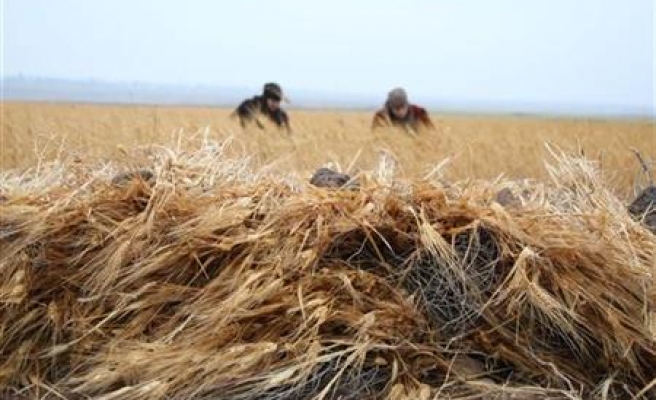 Civil war in Syria has cut the wheat harvest to its worst level in nearly three decades and the government's share of the crop is being further eroded as it struggles to procure grain from rebel-held farming areas.

Estimates collated by Reuters from more than a dozen grain officials and local traders suggest the harvest could be as low as 1.5 million tonnes, less than half the pre-conflict average and well below forecasts from a United Nations food agency.

The agricultural slump deals a blow to the policy of self-sufficiency in food which is a cornerstone of President Bashar al-Assad's efforts to sidestep Western moves to isolate and weaken his government through sanctions.

That policy, part of a command economy imposed by the ruling Baath party when it took power in 1963, turned Syria into a wheat exporter until water shortages six years ago caused in part by intensive farming encouraged by hefty state subsidies.

Despite good rains this year, a scarcity of seed and fertiliser combined with labour shortages and damage to irrigation systems and storage facilities from the relentless conflict have led to the worst crop since 1984, when the country was hit by major drought, the traders and officials said.

Several said the harvest was likely to be as low as 1.5 million tonnes, with a minority saying it might reach closer to 2.0 million - still significantly lower than the U.N. Food and Agriculture Organisation (FAO) initial forecast of 2.4 million tonnes, made shortly before the June-July harvest.

"A favourable rain season like this year would have produced 4 million tonnes before the crisis, covering the country's annual consumption," said a regional commodities trader said.

Until recently the government had stuck to more optimistic forecasts, with Agriculture MinisterAhmad Qadiri saying in May he expected output to reach 3.6 million tonnes.

Since then officials have retreated, blaming Western sanctions for the steep fall in output. Prime Minister Wael al-Halki now says the crop will be around 2.5 million tonnes.

Farmlands east of Aleppo, which has seen heavy fighting between rebels and government forces for the last 12 months, have produced just 50,000 tonnes of wheat so far this year compared to pre-crisis harvests of 175,000 tonnes.

But the low yield is not the only problem for authorities who are also struggling to buy grain from some of Syria's richest farmland - much of it now held by rebels - stretching from the northern border with Turkey to Iraq in the south-east.

In the village of Deir Hafer, 40 km (25 miles) east of Aleppo, sacks of Ahmed Rahal's wheat harvest have been piling up in his makeshift warehouse.

That has forced Rahal and other farmers, who used to deliver nearly three quarters of their national harvest to the government under a state-dominated wheat trade that subsidised their production, to look for other buyers.

"I no longer even dare go to Aleppo to sell my wheat, there are many checkpoints on the way," said Rahal, who was selling his 100 kilo wheat sacks to private traders.

The state's loss of control over a substantial part of the wheat growing areas means that at least half the 2013 wheat production is now outside the government supply chain, according to grains experts and commodities traders.

Their view is backed up by the volume of grains collected by the wheat marketing monopoly so far. It has received only 950,000 tonnes, according to officials in the state run General Establishment for Cereal Processing and Trade (HABOOB).

"We are getting a fraction of what we would normally get this time of the year with only a few centres opening across the country to receive wheat," a source in HABOOB, the agency responsible for government grain procurement, told Reuters.

Although the government marketing monopoly raised the price it pays for wheat by 25 percent from last year it was still below market value, prompting some farmers in areas accessible toTurkey to sell their crop there, where prices are at least double.

In other rebel areas, farmers - especially those growing only wheat - have little alternative to transporting their crop for sale to government collection centres. A quarter of grain bought by the state was likely to have come from rebel areas near Hasaka in eastern Syria, said leading Syrian wheat expert Hikmat Gulak.

"We have encouraged farmers in every way to go to government delivery centres, and increased payment. Ensuring Syrians are fed should be above politics," said a grains official.

The state had deposited funds worth 70 billion Syrian pounds - $350 million at current exchange rates - in the Central Bank for purchases of wheat from local farmers.

The drop in local production since last year has forced Syria to step up grain imports with at least one million tonnes of mainly soft wheat purchased from global markets in 2012, according to a grain official contacted in Damascus.

But increasingly short of hard currency, Syria will struggle to continue importing, he and other experts concur privately. This prompted authorities to seek to unfreeze blocked foreign accounts to pay for food purchases, they added.

In a tender issued on Thursday, a Syrian state agency said it planned to pay for 200,000 tonnes of soft milling wheat using funds in bank accounts frozen by Western financial sanctions.Damascus first suggested that payment method earlier this month, but is not clear whether it has succeeded in freeing up any of its frozen cash.

The country has so far imported only 300,000 tonnes of wheat, mainly of Black Sea origin since the start of the year, according to the official.

A pre-crisis, one-year strategic stockpile of over 4 million tonnes of wheat has almost run out in the last two years, said two former grain officials familiar with the matter.

Production was around 2 million tonnes last year, and grain traders and experts contacted inSyria say the country would require at least two million tonnes of imported wheat this year to help cover the shortfall. That compared with FAO estimates of 1.5 million tonnes, based on official agricultural sources.

On the other hand, agricultural experts say the conflict that has left many parts of rural Syriaoutside government control and forced nearly two million refugees to flee to neighbouring countries, will inevitably ease the pressures on authorities.

"The state now is feeding only part of its citizens so in fact it does not have the same burden. In rebel controlled areas, an increasingly autonomous economy with its own dynamics is developing," said Abdullah Samaha, an Aleppo-based economist.

A growing pattern of reliance by Syrians both in rebel-controlled and state-held areas on food handouts from international aid agencies such as the UN's World Food Programme (WFP), has also reduced demands on authorities.

Food barter deals with regional ally Iran and credit lines have helped Damascus get 250,000 tonnes of Iranian flour this year, easing bread shortages in state-controlled areas caused by the loss to rebels of almost half the northern city of Aleppo, where most of the country's milling capacity existed.

The biggest hit to a state wheat procurement system has been the loss of nearly 50 percent of the harvest from Syria's main eastern breadbasket area known as al-Jazira, which spans Hasaka, Deir al-Zour and Raqqa, where wheat fields rely on underground wells and the Euphrates River.

The resource-rich region traditionally produced 65 percent of the country's pre-crisis average 3.6 million wheat tonnes. The area around the now rebel-held city of Raqqa alone produces a quarter of the national harvest.

"Last year, Raqqa delivered half a million tonnes to the state. This year if we have 150,000 that would be great," said Gulak, who worked in government procurement in the Jazira area for decades.

Most grain delivered to the state now comes from Hasaka, with 600,000 tonnes compared to over 1 million last harvest.

"This year more farmers will keep more of their harvest for personal consumption and sale to local merchants because in such circumstances its safer than sending to a faraway government centre," said Haneen Bakr, a former grains official in Damascus.

"In some areas where armed groups are in control they are forcing people to sell their wheat at lower prices."

Rebel groups such as Ahrar al-Sham that operate in Syria's northern rural areas were already making steps to fill the vacuum left by the state by buying crops from farmers.

Several rebel groups have even brought second-hand mills and harvesters from Turkey to operate in rebel-held towns across northern and eastern provinces.

In the rebel-held border crossing of Bab al-Hawa near Turkey and other towns in rural northSyria, armed groups now manage and operate several small flour mills with an average 2 to 4 tonnes daily capacity, supplying local bakeries.