As Nepal’s mainstream Maoists urge consensus within the constituent assembly on constitution drafting, extra-parliamentary remnants of the decade long “People’s War” are more divided than ever 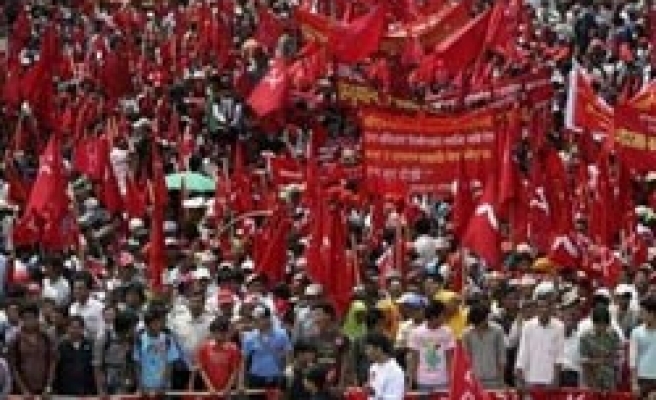 Despite the party's boycott of 2013 election, Chand was upset with how the "dash Maoists" had failed to disrupt the on-going drafting of a constitution for Nepal and their weak response to a government energy-sharing agreement with India.

The development of this factionalism can be traced to their engagement with the Nepali Congress and the Communist Party of Nepal (Unified Marxist Leninist), a centre-left party committed to a “people’s multi-party democracy”, during the Nepalese King Gyanendra’s brutal 14-month period of direct rule initiated in February 2005. Throughout this period parliament was suspended and freedom of expression muzzled, while systematic torture and extra-judicial killings proceeded without censure.

Though the détente between parliamentary and rebel parties provided the People’s Liberation Army an exit from a war that had become a military stalemate, and led to the ousting of the monarch and the creation of the Republic, it was premised on Maoist engagement in open, competitive politics.

Deepak Adhikari, a veteran Nepali journalist that has chronicled the Maoist movement extensively, describes the decision to engage as pivotal to the movement’s subsequent internal woes, and the cluttering of Nepal’s left political landscape.

“In the first conclave held in Balaju, Kathmandu, fissures began to appear when [dash Maoist leader Mohan] Baidya and Chand opposed the establishment faction’s decision to join the government. Dahal and Bhattarai presented the deal as a tactical move, but later on the hardliners realised that it [competitive politics] had been their strategy all along”, he said.

Though the UCPN (M) led a coalition government as a result of a thumping vote share in 2008 elections, the state-takeover the hardliners had hoped was never realized. The party’s Chairman, Pushpa Kamal Dahal, was forced to step down as prime minister after attempting to dismiss Army Chief Rookmangud Katawal in May 2009, while Maoist armed forces, known as the People’s Liberation Army, were defanged through their continued integration into the national army, which was completed in August 2013.

In the wake of the constituent assembly’s dissolution in May 2012, the Baidya faction left the party in June after failing to convince Dahal, once a disciple of Baidya, to pursue a “people’s republic”, rather than the “democratic republic” the party had committed to since coming above ground.

The 2012 split resulted in 45 of 149 Central Committee members leaving the party, including leading hard-line leaders. Though the move was a direct indictment of what was perceived as a “rightist” and “neo-revisionist” parliamentarianism that betrayed the sacrifices of the “People’s War”, its political implications was considered to have hampered the wider cause, and may have contributed to the meagre vote share of the UCPN (M) in November 2013 elections.

Baidya’s breakaway ‘dash maoists’ has achieved little since its departure from the mother party. It opposed November 2013 elections, calling an unsuccessful ten-day strike in the days immediately preceding polls. Despite threats, the party has been relatively muted in response to power-sharing deals recently signed with India, who the party perceives as an imperial power bent on impoverishing Nepal.

Perceptions regarding India have long divided Nepal’s Maoists. While pro-Baidya ideologues consider the country a “principal enemy”, Bhattarai has remained consistent in stressing diplomatic engagement with the country. Dahal’s position on the matter has vacillated.

Despite instability within the UCPN (M), it is possible that Chand’s departure from the Baidya-led party will open the way for a rapprochement between Dahal and Baidya.

According to Adhikari, “This will bring Baidya’s faction and the UCPN (M) closer than ever. In fact, they have been in talks to patch up. The CPN-M didn’t succeed in justifying its split. So, the possibility of reconciliation is very much on the cards.”

Such a process would require an about-face on behalf of Baidya. It would, however, buttress the strength of parties within the constituent assembly currently pushing for the promulgation of a constitution forged via consensus rather than the two-thirds majority technically required to do so.

Chand’s breakaway party is yet to rule out the use of force in attaining its goals. The use of the Nepal Army against rebel forces would further complicate rifts within a movement that now encompasses varying degrees of participation in the formal political structure.