On Feb. 28, 1997, the military effectively deposed the duly elected prime minister, Necmettin Erbakan, a portly, balding Islamist academic who had been in office less than a year, leading to the collapse of Erbakan's coalition government. 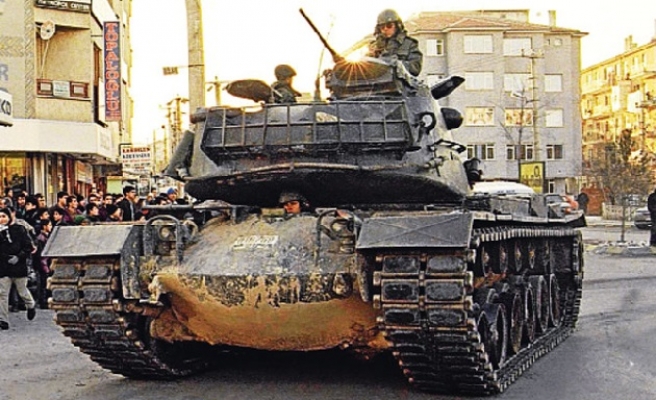 Turkey, a country that has struggled to establish democracy and the rule of law since the republic was founded in 1923, suffered a major blow to that effort early in 1997.

It was Turkey’s last military coup, and perhaps the most unusual. And though it took place on this date 17 years ago, its repercussions are still felt today in the country’s political, administrative, judicial and social life.

On Feb. 28, 1997, the military effectively deposed the duly elected prime minister, Necmettin Erbakan, a portly, balding Islamist academic who had been in office less than a year, leading to the collapse of Erbakan's coalition government.

Though Erbakan remained in office a few months more, at least in theory, he became nothing but a cog in the military’s wheel. The military forced him to sign a number of anti-Islamist decrees.

At the time, there was nothing unusual about the military’s intervention in the country’s political life. The Turkish Army had long considered itself the guardian of the secular state, which is regarded as a legacy handed down by the founder of the Turkish Republic, Mustafa Kemal Ataturk.

What was unusual was that the 1997 coup, which only added to the country’s notorious tradition of military coups, took place without the dissolution of Parliament or the suspension of the constitution, leading people to label it Turkey’s first “post-modern” coup.

What is significant, as well, is that the military may for once have overplayed its hand.

For now, at least, the tables have turned. Erbakan, who died in 2011, was a mentor to Turkey’s current prime minister, Recep Tayyip Erdogan, who also has Islamist roots.

And Erdogan, not one to ignore the lessons of the past, has effectively put an end to the parade of military coups through a series of trials of military leaders responsible for failed coup attempts against his Justice and Development Party-led government.

One of these was "Sledgehammer" – “Balyoz" in Turkish – a coup plot by a faction in the Turkish Armed Forces in 2003, only a year after Erdogan and his party came to power.

In 2012, some 300 of the 365 people convicted of involvement in the plot were sentenced to prison. Thirty-four suspects were acquitted.

All of this matters globally, because many world leaders look to Turkey – a country of more than 75 million people, 99.8 percent of them Muslim – as a leader in the promotion of moderate, non-jihadist Islam.

The 1997 coup began with an ominous show of force. Shortly before a meeting of the National Security Council, a parade of tanks rumbled through the streets of Ankara, the country’s capital.

The meeting turned into the longest session ever of the security council. It resulted in what is known as the February 28 memorandum – a host of decisions by the Turkish military in response to what it saw as rising Islamist ideology in the country.

The military forced Erbakan to sign a slew of anti-Islamist decrees, including a ban on headscarves, the shutting down of Qur'an schools and the implementation of measures to control the news media.

Thousands of headscarf-wearing students had to leave their universities, and many went abroad to complete their studies.

A campaign was carried out between 1997 and 2001 to blacklist scores of people. Public employees, academicians, and others were disciplined, had to resign from their posts or were fired.

Secondary vocational schools – including those training imams for the Muslim community – were shut down. The graduates of those schools were denied entry into universities.

To crown it all, Turkey had an economic crisis in 2001, probably the single most devastating outcome of the "post-modern" military coup.

Tension between then-President Ahmet Necdet Sezer and Prime Minister Bulent Ecevit during another meeting of the National Security Council in February 2001 led to a 15 percent drop in the Turkish stock exchange, soaring interest rates, and state-owned banks lost $3 billion – a first in their history.

The US dollar almost doubled against Turkish lira, shaking the markets and forcing the government to switch from the fixed exchange rate system to a floating rate.

But Turkish businessman Dr. Zeynel Abidin Erdem, CEO of Erdem Holding Company and Turkey's leading communication firm Genpa, and holder of the "outstanding service award" granted by Turkish Parliament, has put the actual cost of the sinking banks to the Turkish economy at up to $80 billion.

In 2012, Turkish Parliament established a commission to investigate military coups, most importantly the Feb, 28 coup.

Turkey has been trying 103 people accused of involvement in the Feb. 28 coup, 76 of whom were jailed pending trial, for "involvement in forcibly overthrowing and toppling the government of the Turkish Republic."

On Dec. 19, 2013, just over two months ago, 75 of the 76 jailed defendants were released under condition of judicial supervision.

As it seeks to dress the wounds of the post-modern military coup, Turkey and those of its people who suffered most during the process are still waiting, 17 years later, for the result of the trials.

Navaid Aziz: The period of communicating with people only in the mosques has come to an end
Facebook
852.3B
Twitter
0
POOLAll Pools
PRAYER TIMES