"The first emerging democracy in Egypt's history and the first in the region since the Arab Spring is quickly being dismantled," said Tawakul Karman. 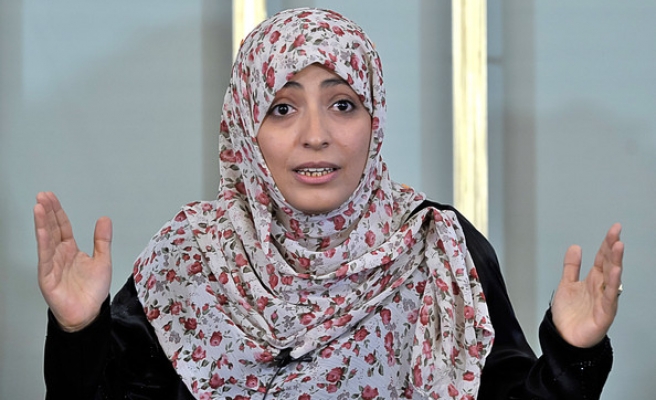 Tawakul Karman, who shared a Nobel peace prize for her pro-democracy campaigning in Yemen, has said she views the Egyptian army's overthrow of President Mohamed Morsi as a death knell for Arab democratic movements.

The removal of Morsi, Egypt's first freely elected leader, on July 3 "reset the clock" on the gains made since a popular uprising ended Hosni Mubarak's 30 years of one-man rule in 2011, she told Reuters in an interview by telephone late on Monday.

"The first emerging democracy in Egypt's history and the first in the region since the Arab Spring is quickly being dismantled," said the 34-year-old Yemeni mother of three.

Karman, the first Arab woman and second Muslim woman to win the Nobel peace prize, was turned away from Egypt on Aug. 4 after she announced on social media her intention to join Muslim Brotherhood protesters at a huge pro-Mursi vigil in Cairo.

Egyptian authorities gave no reason beyond saying Karman was on a list of people banned from entering the country.

"Denying me entry means only one thing. Egypt's new government is returning to the autocratic ways of the past. They are not willing to tolerate difference in opinion," she said.

Karman described Morsi's fall as part of a broader counter-revolution gripping the region and said remnants of governments toppled in 2011 and 2012 were clawing their way back into power.

"The Arab Spring is about building democracy. A military coup is the antithesis of that. It undermines everything," she said.

"The destruction of Egypt's revolution means death for the Arab Spring."

The Egyptian military says it deposed Mursi in response to the "will of the people" after a bout of mass protests calling for the Islamist leader to resign. An army-installed interim government is overseeing a "road map" leading to elections.

Karman, a member of Yemen's Muslim Brotherhood, became a figure of symbolic importance in the 2011 Yemeni uprising that gained strength from Mubarak's overthrow in Egypt.

Known as the "Iron Woman" and "Mother of the Revolution", Karman was arrested at one of Yemen's first pro-democracy protests in January 2011. Outrage over her plight helped turn demonstrations nearSanaa University into full-fledged revolt.

Her tours of the Middle East since winning the Nobel prize have made her a controversial figure in the eyes of some Egyptians, who say she is meddling in others' internal affairs.

Karman criticised the refusal of the United States, which gives Egypt $1.5 billion in mostly military aid, to condemn Morsi's removal by the army as a coup. Washington would be legally obliged to cut off the aid if it did so.

"It is shameful for the U.S. secretary of state to describe the coup as 'restoring democracy'," she said.

"Supporting the overthrow of a democratically elected leader sets a precedent. It will destabilise the region and the world in the long run. The U.S. administration has yet to learn the lesson of the Arab Spring revolutions."

The 2011 Nobel Peace Prize was jointly awarded to Karman and two Liberian women, Ellen Johnson Sirleaf and Leymah Gbowee, for their work for women's rights and building peace.