Biden sees Iraq government in 'next couple of months'

U.S. Vice President Biden said he believed Iraq's political stalemate was nearly over and officials would form a government in "the next couple of months." 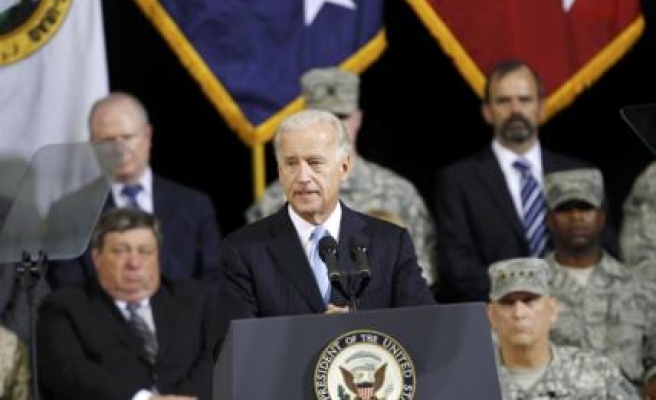 U.S. Vice President Joe Biden, in Baghdad to mark the end of U.S. combat operations, said on Wednesday he believed Iraq's political stalemate was nearly over and officials would form a government in "the next couple of months."

Biden told CBS's "Early Show" he had spoken with all of Iraq's main political leaders and thought there was a good chance of a deal being struck soon.

In a separate interview with PBS Newshour, the U.S. vice president offered a broader time frame.

"I've met with every one of the groups that won portions of the vote in the elections and I'm absolutely convinced that they are nearing the ability of forming a government, that will be a government representing the outcome of the election which was very much divided," he said.

"I am confident that they ... have run the course of what other options they have and it's getting down to the point where in ... the next couple of months there's going to be a government," he told PBS Newshour.

But Osama al-Nujaifi, a senior leader in Iraqiya, the top vote winner in Iraq's election, told Reuters that Biden was being "very optimistic" as politicians had yet to agree on who should be the next prime minister.

Biden also told PBS, "The only thing I have said in the name of the president, the government has to reflect the outcome of the election which is another way of saying all the four major entities that did relatively well have to be included in the government. That's a difficult thing to put together."

End of US attacks

Biden spoke to U.S. television networks a day after President Barack Obama, in an address from the Oval Office, declared an end to the seven-year U.S. attacks in Iraq.

Almost a trillion dollars have been spent and more than 4,400 US soldiers and at least 100,000 Iraqi civilians killed since the invasion.

The U.S. is finishing its combat role at a time when political tensions in Iraq run high. Six months after an inconclusive election, major parties have yet to agree on the shape of a coalition government.

"There's always a possibility long term if this goes on of creating a (power) vacuum, but the truth of the matter is violence is the lowest level it's been since we arrived in 2003," Biden told CBS.

"It takes a while to put together this coalition but I believe they are close to doing that."

Osama al-Nujaifi, a senior leader in Iraqiya, the top vote winner in Iraq's election, thought Biden was being "optimistic" as Iraqi politicians have not agreed yet on who should be the next prime minister.

"Actually there is nothing decisive until now, there is no agreement, there are negotiations and there are programs being studied from Iraqiya and State of Law, but there are disagreements as well," he told Reuters.

"Until now, there is progress, but we can't say it will be soon, within days... I think Mr. Biden was very optimistic."

The cross-sectarian Iraqiya bloc, led by former premier Iyad Allawi, had a two-seat lead over the mainly Shi'ite State of Law alliance of incumbent Prime Minister Nuri al-Maliki in the March 7 election.

Roughly 50,000 U.S. soldiers still in Iraq are moving to an advisory role in which they will train and support Iraq's army and police. Obama has promised to pull all U.S. troops out of Iraq by the end of 2011.