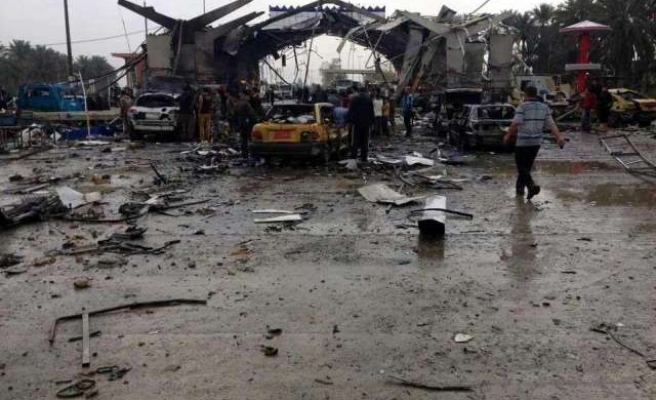 A bomber driving a minibus packed with explosives killed at least 45 people and wounded 157 on Sunday in the southern Iraqi city of Hilla, police and medical sources said.

The attacker approached a main checkpoint at a northern entrance to the largely Shi'ite Muslim city and detonated the minibus, a police officer said on condition of anonymity.

At least 50 cars were set ablaze with passengers trapped inside and part of the checkpoint complex was destroyed, the officer said.

No one claimed responsibility for Sunday's attack, but the deputy chairman of Hilla provincial council, Aqeel al-Rubaie, accused al Qaeda of being behind the bombing.

Rubaie said the local government had received tips that al Qaeda-affiliates hiding in farmland north of Hilla were plotting a strike.

He said the violence was a spillover from fighting in neighbouring Anbar, where the Shi'ite-led government has been battling the Islamic State of Iraq and the Levant (ISIL) around the cities of Ramadi and Fallujah.

"We have evidence that al Qaeda terrorists are standing behind the suicide attack today and since the breakout of fighting in Anbar, al Qaeda has stepped up attacks in Hilla," Rubaie told Reuters.

The scene of the attack was strewn with debris from the checkpoint, and the shells of burnt out cars littered the road.

"I was sitting inside my kiosk when suddenly a horrible blast threw me outside and hurled my groceries up in the air. I saw cars set ablaze with people burning inside," said Abu Nawar, owner of a makeshift kiosk made of palm tree leaves near the checkpoint.

Police were using cutting equipment to break into the blackened vehicles and lift out the bodies, the police officer said.

"A policeman thought the minibus was suspicious and he asked the driver to pull over for a check, but the vehicle exploded," the officer said.

Bombings and other attacks killed almost 8,000 civilians in Iraq in 2013, the deadliest year since 2008. Violence has not abated in the early months of 2014.

Relatives of the casualties lined up outside the Hilla morgue to claim the bodies of their loved ones. Inside, family members cried and wept as they struggled to recognise the bodies.

"I want to keep my son's shoes forever, I loved him so much, they broke my heart," said Um Muthanna, who identified the charred body of her son, Muthanna Abdul Hussein, a cameraman for state television, from his shoes and socks.

Muthanna was killed along with a second cameraman from Iraqiya state television, Khalid Abid.

The death toll rose as some of the wounded died in hospital and more bodies were discovered at the bomb site, police said.

In a separate incident, on the border of Anbar province and western Baghdad, a group of gunmen attacked an army check point in the Sunni area of Abu Ghraib, killing four soldiers, police and medical sources said.

In northern Iraq, three North Oil Company employees were killed and seven wounded when gunmen in a car fired at a bus ferrying NOC employees near Tuz Khurmatu, close to the oil-rich province of Kirkuk, according to a police official.

ISIL militants and other armed groups linked to the fight in Anbar have been carrying out attacks in northern Iraq as they try to divert government troops from Anbar and exploit openings made by the concentration of security forces in the west.