Six Cyprus-based Tornado GR4 fighter-bombers were on standby to take part in initial sorties after Prime Minister David Cameron recalled parliament from recess to back military action following a formal request from the Iraqi government. 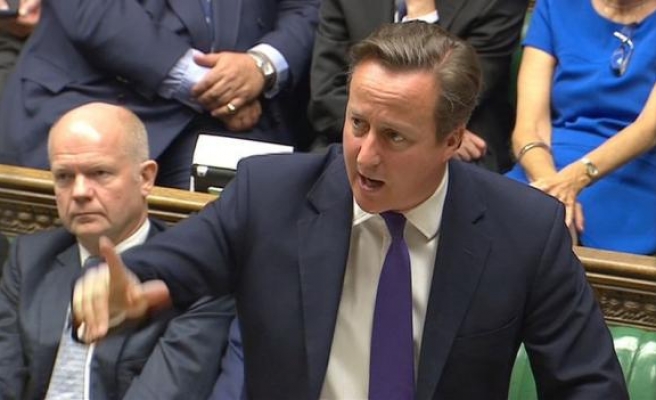 Britain's parliament approved air strikes against ISIL militants in Iraq by a decisive margin on Friday, paving the way for the Royal Air Force to join U.S.-led military action with immediate effect.

Six Cyprus-based Tornado GR4 fighter-bombers were on standby to take part in initial sorties after Prime Minister David Cameron recalled parliament from recess to back military action following a formal request from the Iraqi government.

He told lawmakers before the vote not to expect a "shock and awe" air campaign, while his office said a small number of service people could be sent to Iraq within hours of the vote to guide air strikes and, possibly, to train Iraqi and Kurdish regional peshmerga forces battling ISIL militant forces.

The 524-43 vote means Britain will embark on its first military campaign since it conducted air strikes in 2011 on behalf of Libyan rebels who toppled Muammar Gaddafi, and join an international coalition led by the United States.

While Arab countries have quickly joined the bombing campaign, Washington's traditional Western allies had been slow to answer the call from U.S. President Barack Obama. France was the first European country to respond, on Sept. 19, but since Monday, Australia, Belgium, the Netherlands and Denmark have announced they would dispatch warplanes.

Cameron was careful to secure cross-party support for strikes against ISIL before putting a motion before parliament.

"Is there a threat to the British people? The answer is yes," Cameron told parliament before the vote, saying he thought action would need to last "years" to be effective.

"This is not a threat on the far side of the world. Left unchecked, we will face a terrorist caliphate on the shores of the Mediterranean and bordering a NATO member, with a declared and proven intention to attack our country and our people."

Britain, a staunch U.S. ally, was quick to join military action in Afghanistan and Iraq a decade ago. But a war-weary public and parliament's rejection last year of strikes on the Syrian government prompted Cameron to tread carefully this time.

Before Friday, Britain had confined itself to delivering aid, carrying out surveillance, arming Kurdish forces who are fighting ISIL militants, and promising training in Iraq.

But the beheading of a British aid worker by an ISIL militant with a British accent has driven home the danger the group poses to domestic security. The fate of another Briton being held, Alan Henning, has also stirred public opinion.

Justin Welby, the Archbishop of Canterbury, the spiritual leader of the world's 80 million Anglicans, said he supported British military action but cautioned that "over time" a different approach, using ideology and religion, needed to be adopted to defeat ISIL.

Cameron's tactics dismayed some legislators in his Conservative Party who said they thought striking IS in Iraq was insufficient and wanted him to extend action to tackle militants in Syria too, something he said he wasn't ready to do for now.

During a lively parliamentary debate, Richard Ottoway, the Conservative chairman of parliament's foreign affairs committee, said ISIL was ranging at will across an unguarded border between Iraq and Syria, meaning it had to be targeted in both countries.

"We will never end this conflict by turning back at the border," Ottoway told parliament.

Cameron explained he had not proposed air strikes in Syria because he realised there were concerns within the opposition Labour party about such action. Labour has said any such action would require a U.N. resolution on Syria.

"I do believe there is a strong case for us to do more in Syria but I did not want to bring a motion to the house today which there wasn't consensus for," said Cameron.

"Of course ... there are many concerns about doing more in Syria and I understand that."

Some Conservatives harbour doubts about the efficacy of the Iraqi military and say Cameron is wrong to rule out deploying British ground forces, as he repeatedly has.

The scope of the proposed British effort - only six Cyprus-based Tornado GR4 fighter-bombers are initially due to take part in strikes - is modest compared to previous interventions.

That has prompted some Conservatives to accuse Cameron of taking only token action.

"Is he seriously contending that by air strikes alone we can actually roll back ISIL, or is this gesture politics?" Edward Leigh, a Conservative lawmaker, told parliament.

Opposition leader Ed Miliband of Labour said he backed strikes against ISIL in Iraq, but some lawmakers in his left-leaning party made clear they were uncomfortable about the prospect of any kind of military action.

"The question is, will what the Prime Minister and the government is proposing, will that be effective in destroying ISIL?," asked David Winnick, a Labour lawmaker.

"Look at what the House of Commons (parliament) agreed to: Iraq, Afghanistan, in this government, Libya. None of them success stories."

Britain says around 500 of its citizens have travelled to fight in Syria and Iraq, raising fears radicalised fighters could return to stage attacks at home - something Cameron has described as the biggest threat to national security.