Footage from the scene showed several charred vehicles and what appeared to be a blood stain on the cobbles outside the governor's office. 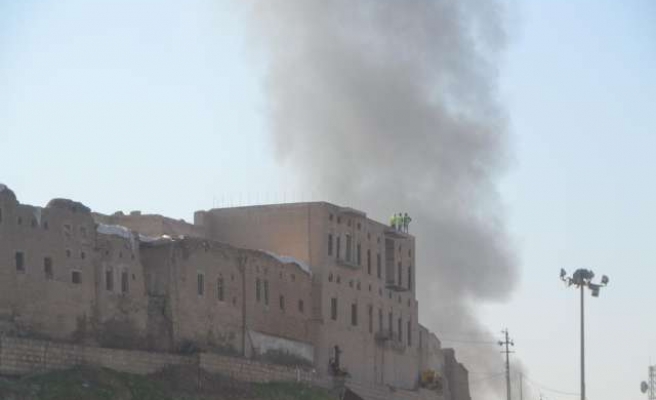 A bomber driving a car packed with explosives blew himself up in the capital of Iraq's Kurdistan region on Wednesday, killing at least five people in the first big attack there in more than a year.

Mayor Nihad Latif Koja told Reuters the assailant had detonated himself as he tried to enter the governor's compound, which is protected by blast walls, in the centre of Arbil.

Explosions are a regular occurrence in the federal capital Baghdad and other cities outside Kurdistan but the autonomous region has largely managed to insulate itself from the violence convulsing the rest of the country.

ISIL militants who overran swathes of northern Iraq this summer have repeatedly threatened to launch attacks against the Kurds, who are fighting them along a front line stretching more than 1,000 km (600 miles).

Footage from the scene in Arbil after the mid-morning attack showed charred vehicles and blood smeared on the cobbles outside the governor's office. Windows on the opposite side of the street had been shattered by the force of the blast.

A witness interviewed live on Kurdistan TV said two policemen and two civilians had been killed in the explosion.

The United States launched air strikes in Iraq this August when ISIL militants advanced on Arbil, where many expatriates, including oil industry and aid workers, are based.

The last major attack in Arbil was more than one year ago, when militants launched a coordinated suicide and car bomb attack on the headquarters of the security services. Another blast took place in August, but there were no casualties.

The president of Iraqi Kurdistan, Massoud Barzani, accused Western countries on Wednesday of not providing enough heavy weapons to help his 'peshmerga' forces deliver a "decisive blow" against ISIL militants.

Western powers see the Kurds as a vital bulwark against further ISIL advances. France, Britain, Germany and others have begun arming the Kurds, whose Soviet-era weaponry has proved ineffective against insurgents flush with hardware plundered from the Iraqi army after it abandoned its posts in June.

"We'd like to thank the members of the (anti-ISIL) coalition for the support they have provided, but ... all the support we have received so far is not up to the level that is needed," Barzani told France 24 in an interview aired on Wednesday.

"The heavy weapons systems that we need, especially in terms of quality and quantity, for example the APCs (armoured personnel carriers), the helicopters, the artillery we need for a decisive war against them (IS) - we have not received these types of weapons," he said.

France says it has provided machine guns and munitions and has promised to give "sophisticated" weapons to Iraqi Kurds. Some 200 French special forces are also on the ground training the Iraqi Kurds.

However, Barzani said the pledges were not sufficient.

"Is there a ceiling on the heavy weapons systems that we should receive in terms of the quantity and quality? The answer is not very clear to us," he said.

A U.S.-led coalition has launched air strikes against ISIL in Iraq and Syria, including in and around the town of Kobane, on the Syrian side of the border with Turkey. Some 150 Iraqi peshmerga fighters are helping to defend Kobane.