Army sources had initially said 15 soldiers had been killed and 20 others wounded, but said later that the toll was less. 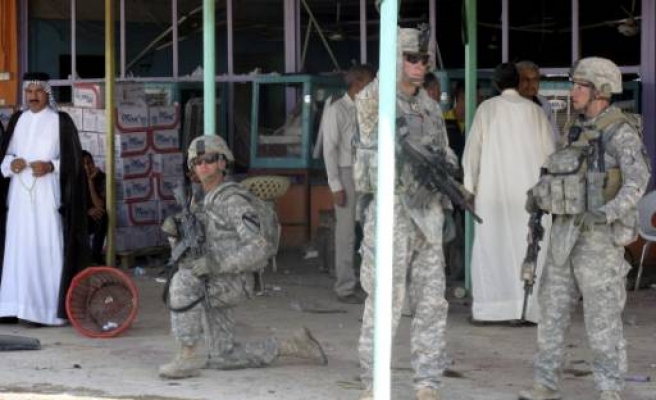 Elsewhere, two Iraqi soldiers were killed and 10 others wounded when a bomb attached to a military bus exploded at an army base in Habaniya, around 85 km (50 miles) west of Baghdad, army sources said.

Bombings and killings occur on a daily basis in Iraq more than eight years after the U.S.-led invasion but violence has dropped from the peak of sectarian fighting in 2006-07.

The U.S. military is expected to fully withdraw by Dec. 31, but some troops may remain beyond 2011 to continue to train its army and police.

The first incident occurred outside the Ehsan tourist restaurant, a popular rest-stop by a main highway for people travelling through al-Hamza, located just south of Hilla, 100 km (60 miles) south of Baghdad.

We have formed a team to investigate," said Haider al-Zanbour, chairman of the security committee in Babel Council.

The United States military said one of its explosive ordnance disposal (EOD) teams conducted a post-explosion analysis at the scene of the incident in Hamza.

"I was in the kitchen when suddenly I heard a blast. I heard loud screams, and the sound of people running. I left the kitchen and went outside to see people covered in blood, lying on the ground," said Tahsin Mahmoud, a worker in the restaurant's kitchen. "It took a long time for Iraqi security forces to reach the scene."

A Reuters reporter at the site said the entire front of the restaurant was destroyed, with shattered glass on the floor and blood stains covering food, chairs and tables inside the place.

"A powerful blast shook the restaurant. All I could see was smoke and shattered glass everywhere. I covered my face and hid. A few minutes later, I ran outside and saw cars ablaze," said Mehdi Mohammed, a waiter at the restaurant.

A source in Hilla's main hospital put the toll at 15 people killed and 46 wounded while a police source at Iraq's provincial joint security centre said 15 people were dead and another 50 wounded. Deputy Health Minister Khamis al-Saad put the toll at eight killed and 36 wounded.

An Iraqi army source reporting the bombing in Habaniya said: "The soldiers finished their academic training and a bus took them to have breakfast at the restaurant in the base. When the bus reached the restaurant it exploded."

Army sources had initially said 15 soldiers had been killed and 20 others wounded, but said later that the toll was less.