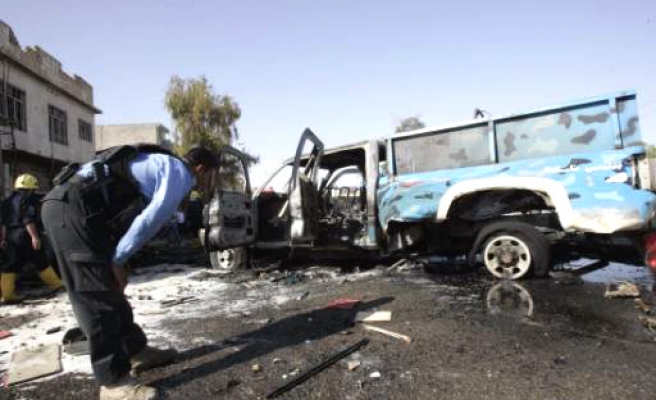 In the worst attack, a roadside bomb followed by a car bomb targeting police killed at least 37 people in Kut, a city 150 km (95 miles) southeast of the capital Baghdad, police and health officials said.

Dhiyauddin Jalil, a director of local provincial health department, said more than 68 people were wounded in the Kut blasts and doctors in the city's main hospital said they were struggling to treat casualties, many with severe burns.

Dozens more were killed or wounded on Monday in bombings and attacks in other cities.

At least eight people were killed and 14 wounded when a suicide car bomber attacked a municipality building in Khan Bani Saad, about 30 km (20 miles) northeast of Baghdad, in the province of Diyala, two police sources said on Monday.

One attacker detonated his suicide vest hoping to kill a high-ranking counter-terrorism officer, and the other was shot dead during the attack, said Captain Jassim al-Jibouri, an officer with the Tikrit counter terrorism unit.

"There was a roll call for the police in the early morning. The first killed and wounded policemen and as the ambulances came the second car exploded," said Mussab Mohammad, a local resident who witnessed the attacks.

Another man was killed and 12 people were wounded in simultaneous car and motorbike bombings in the centre of the northeastern city of Kirkuk, police sources said.

In al-Wajehiya, another town in Diyala province, a bomb in a parked car went off near a government building, killing one policeman and wounded 13, a police source said.