Dozens of Yazidis found in 'mass grave' in Mosul 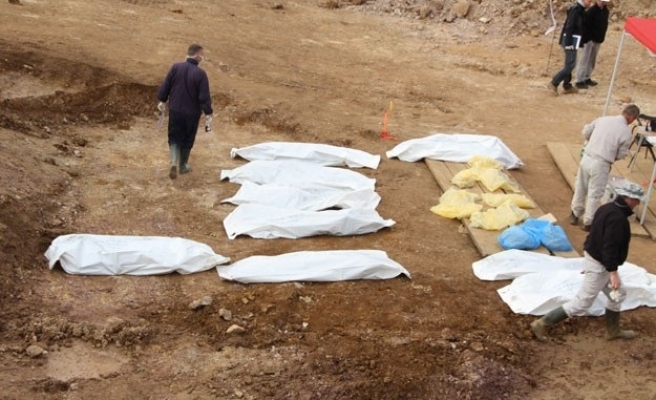 A mass grave containing the remains of 35 Yazidi has been found in the northern Iraqi province of Mosul, which was overrun by Islamic State militants in June, Kurdistan Democratic Party officials have said.

Kurdish peshmerga soldiers discovered the corpses and identified them as being the remains of Yazidi - a Kurdish ethnic community based primarily in northern Iraq - by their clothes, said Said Memo, a spokesman for the Kurdistan Democratic Party (KDP), on Wednesday.

"The mass grave included the bodies of women and children," he said.

The people may have been killed when so-called 'Islamic State' (IS) militants were crossing the region last month, Said added.

Meanwhile, local tribes people said the bodies of inmates seized from Badush prison in July had also been discovered in a mass grave in the al-Humeydat region.

The number of corpses was not disclosed but sources said they were dressed in Badush prison uniforms.

Armed groups linked to the IS have captured large amounts of territory in Iraq in recent months, forcing thousands of Iraqis including Turkmen, Arabs and Yazidis to flee.

IS, which already controls parts of Syria, captured the northern Iraqi city of Mosul in June and then surged across the north of the country, taking control of a number of predominantly Sunni cities.