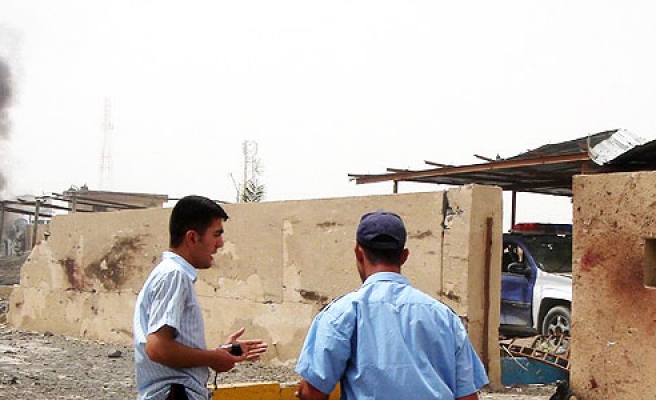 Iraqi security forces found 53 corpses, blindfolded and handcuffed, south of Baghdad on Wednesday as Shi'ite and Kurdish leaders traded accusations over an insurgency raging in the country's Sunni provinces.

Officials said dozens of bodies were discovered near the mainly Shi'ite Muslim village of Khamissiya, with bullets to the chest and head, the latest mass killing since Sunni insurgents swept through northern Iraq.

"Fifty-three unidentified corpses were found, all of them blindfolded and handcuffed," Sadeq Madloul, governor of the mainly Shi'ite southern province of Babil, told reporters.

He said the victims appeared to have been killed overnight after being brought by car to an area near the main highway running from Baghdad to the southern provinces, about 25 km (15 miles) southeast of the city of Hilla.

The identity and sectarian affiliation of the dead people was not immediately clear, he said.

Sunni militants have been carrying out attacks around the southern rim of Baghdad since spring. In response, Shi'ite militias have been active in rural districts of Baghdad, abducting Sunnis, many of whom later turn up dead.

The tit-for-tat attacks have escalated dramatically since ISIL fighters seized control of large parts of northern and western Iraq last month, sweeping towards Baghdad in the most serious challenge to the Shi'ite-led government of Prime Minister Nuri al-Maliki since the withdrawal of U.S. forces in 2011.

Mass killings of scores of victims have become a regular occurrence in Iraq for the first time since the worst days of sectarian and ethnic cleansing in 2006-2007.

Amnesty International and the United Nations have reported several other suspected incidents of mass killings of prisoners in government custody.

The renewed sectarian war has brought violence to levels unseen since the very worst few months of the fighting that followed the U.S. invasion to topple Saddam Hussein in 2003.

Abductions have also increased. On Friday, 17 Sunni Muslims were taken from the Musayyib area and briefly held by security forces and Shi'ite militia, a local tribal leader said, while a prominent sheikh was also kidnapped by unidentified men.

Sunnis have backed the Islamic State's offensive because of the widespread view that they have been oppressed under Maliki's government.

The United States and other countries have called for politicians to set up a more inclusive government in Baghdad following a parliamentary election in April. But the new legislature has so far failed to agree on leadership for the country, leaving Maliki in power as a caretaker.

Sunnis and Kurds demand he leave office, but he shows no sign of agreeing to step aside. The Kurds are now closer than ever to abandoning Iraq altogether, with Massoud Barzani, leader of their autonomous region, calling last week for his parliament to ready a referendum on independence.

In a statement late on Tuesday, Barzani launched a withering attack on Maliki, saying his eight years in office had brought disaster to Iraq and set the stage for its latest conflict.

"Today a dangerous precedent is being set, of feeding a chauvinistic campaign of ethnic hatred based on the distortion of reality... to serve political objectives and narrow partisan interests of the person who has caused Iraq to be led from failure to failure and crisis to crisis," Barzani said.

Kurdish forces have exploited the turmoil to seize control of the city of Kirkuk and its huge oil reserves a month ago, achieving a long-held dream. They regard the city, just outside their autonomous region, as their historical capital, while its oil could provide ample revenue for an independent state.

"We have said we are not prepared under any circumstances to accept for our will to be bent, and go back to square one and face what reminds us of the policies that drowned Kurdistan in seas of the blood of its civilians and turned their homeland to ruins and mass graves," Barzani said in his statement, referring to years of oppression under Saddam.

"That is what we have clearly faced throughout the period of abuse of power during the two disappointing terms of the prime minister."

Maliki hit back in a weekly address on Wednesday, accusing Kurds of allowing their provincial capital Arbil to become a haven for the Islamic State and other militants, including former members of Saddam's now-banned Baath Party.

"We will never be silent about Arbil becoming a base for the operations of the Islamic State and Baathists and al Qaeda and the terrorists," he said.

Many Sunni Muslims who fled the mostly Sunni northern city of Mosul during the militants' offensive have ended up in Arbil.

Medical sources and eyewitnesses said seven people were killed and 18 wounded in an air raid on Mosul on Wednesday.

In fighting northeast of Baghdad, militants took control of the town of Sudor as well as a local dam in fighting which killed four soldiers and wounded six others, a source at the local al-Zahra hospital said.

Sudor lies in Diyala province about 90 km (55 miles) from the capital, another area where the army and Shi'ite militias have clashed with the Sunni insurgents, with both sides gaining and losing territory.

Also in Diyala, nine soldiers were killed and 38 were wounded as they repulsed an attack by the Islamic State fighters on the Mansuriya military base on Wednesday, police and hospital sources said.

In the Zaiyouna district of eastern Baghdad, gunmen stormed the house of a government official, beheading his son and shooting dead his wife, a security source and a source in the Baghdad morgue said.