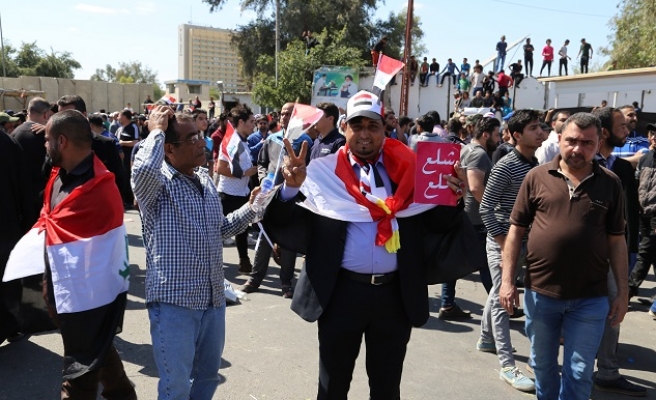 Supporters of Iraqi Shia leader Muqtada al-Sadr on Sunday continued to demonstrate outside the gates of Baghdad’s heavily-fortified Green Zone -- for the third day in a row -- to demand that the government carry out a raft of promised reforms.

"We will continue our sit-ins outside the Green Zone in response to al-Sadr’s call," Ayoub Ismail, a protester, told Anadolu Agency.

On Friday and Saturday, thousands of al-Sadr supporters staged protests and sit-ins outside the gates of Baghdad’s Green Zone, which houses the prime minister’s office, Iraq’s parliament and a number of foreign diplomatic missions.

Al-Sadr wants Prime Minister Haidar al-Abadi to reshuffle his cabinet and form a government of technocrats untainted by corruption or sectarianism -- both of which, critics say, have hamstrung Iraq’s previous post-invasion governments.

According to Ismail, demonstrators are abiding by the law and cooperating with Iraqi security forces.

"We are here to demand the formation of a technocratic government, the prosecution of corrupt officials and the return of funds pilfered from the state," he said.

Last month, al-Sadr gave al-Abadi a 45-day deadline to present a list of nominees for the sought-for technocrat government.

The Shia leader went on to warn that his followers would storm the Green Zone if the demands were not met.

On Saturday, Iraqi President Fuad Masum held a meeting with political party leaders in hopes of negotiating an end to the ongoing demonstrations.

Al-Sadr, however, refused to attend the meeting.