On Friday, Some 8,000 Turkmen fighters have already joined the Iraqi army's ranks to fight ISIL militants, according to a tribal source. 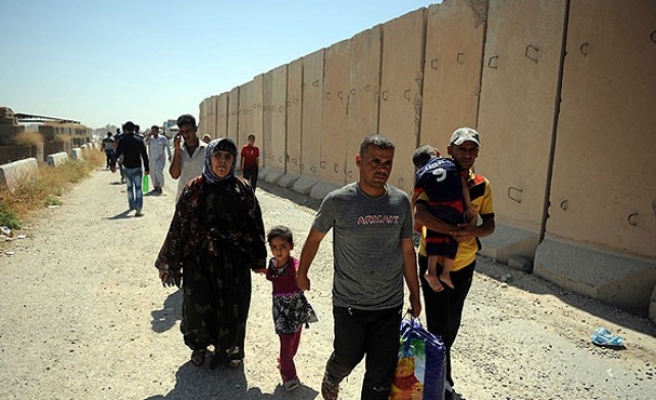 Militants led by self-styled Islamic State of Iraq and the Levant (ISIL) took complete control of the mainly Turkmen northwestern Iraqi district Tal Afar on Monday, according to a security source.

Hundreds of families fled the city in northern province Ninawa since clashes between the self-styled Islamic State of Iraq and the Levant (ISIL) and security forces backed by Turkmen tribal fighters started on Sunday.

In the last 24 hours eight Iraqi soldiers have been killed a number captured in eastern province Diyala, which borders Iran. A tribal source said an armed group, with the backing of armed tribesmen, had clashed with the soldiers and seized the areas of Muqdadiyah, Jalula and Saadia in the province's north.

On Sunday, 10 civilians were killed and 40 injured in a mortar attack, believed to have been carried out by ISIL militants, according to a medical source.

Turkmen tribesmen, who constitute the majority in the city, formed vigilante groups after ISIL-led forces seized the provincial capital, Mosul.

On Friday, Some 8,000 Turkmen fighters have already joined the Iraqi army's ranks to fight ISIL militants, according to a tribal source.

The source, who spoke on condition of anonymity, told AA: "Youths from the tribes are doing joint patrols with Iraqi security forces inside and outside the city of Tal Afar to counter any possible attack from ISIL."

Iraqi forces announced the killing of 29 militants from the ISIL in Iraq's eastern city Baqubah.

He said 12 other ISIL militants have been killed and eight of their vehicles destroyed in continuing clashes in Al Adhim, 50 kilometers from Baquba.

Iraq's Air Force on Monday carried out a series of raids on targets believed to strongholds for ISIL and their allies in northern Iraq's Salahuddin province, according to a tribal source.

Hundreds of thousands of civilians fled the province's main two towns, Tikrit and Samarra, as the Air Force targeted areas close to Tikrit and Iraqi capital Baghdad, according to an Anadolu Agency reporter.

"ISIL militants are still in Salahuddin province and they are taking more control of villages and areas close to the capital Baghdad," Khudair Rahman, a tribal leader in Samarra, told the AA.

Near Tikrit, local residents recovered the bodies of five Iraqi soldiers, who were executed by armed groups, from the Tigris River, the captain of military operations in Samarra told the AA.

Iraqi Prime Minister Nouri al-Maliki said on Sunday that Iraqi forces had regained "the initiative and began to crawl against ISIL forces." He was speaking to a crowd of volunteer fighters in Baghdad's southern district Mahmudiya.

"Some political failures in Iraq and other states are supporting ISIL group," said Maliki.

Addressing the volunteers, he said: “your mission does not end by purging ISIL militants and pro-ISIL politicians, your mission is the formation of the Iraqi army."

Iraqi national security adviser Faleh Alfayadh announced Sunday that Maliki had ordered the creation of a system for recruiting civilians to fight against radical militants who have seized control of northern parts of the country. He also denied the presence of Iranian Revolutionary Guard in Iraq.

ISIL, which developed into a formidable force inside Syria, extended its reach into Iraq after gaining near-complete control of the northern Iraqi city of Tikrit and seizing Mosul, Iraq’s second-largest city on Tuesday.

The group seized large swathes of western Iraq’s Anbar Province in January, including much of Fallujah and parts of Ramadi, flashpoints of the US-led war in 2003.

UN Secretary-General Ban Ki-moon on Monday warned against sectarian rhetoric in Iraq after the recent upsurge of violence by terrorist groups including the ISIL.

Ban said "Mass summary executions by ISIL are deeply disturbing and underscore the urgency of bringing the perpetrators of such crimes to justice."

The statement was published following the claim by ISIL of Sunday's execution of around 1,700 Shiite soldiers.

In the statement, Ban called on all Iraqi political, military, religious and community leaders to ensure that their followers avoid acts of reprisal.

Ban urged Iraqi leaders to unite in a national security plan and also urged the international community to unite in showing solidarity with Iraq during the conflict.

The Secretary-General also reiterated his condemnation of the recent upsurge of violence in Iraq.

"The United Nations Assistance Mission for Iraq (UNAMI) stands ready to assist the Government and people of Iraq in overcoming the crisis," he added.