The alliance between Sunni Dhuluiya and Shi'ite Balad has required people in both towns to overcome sectarian animosity built up during a decade of war. 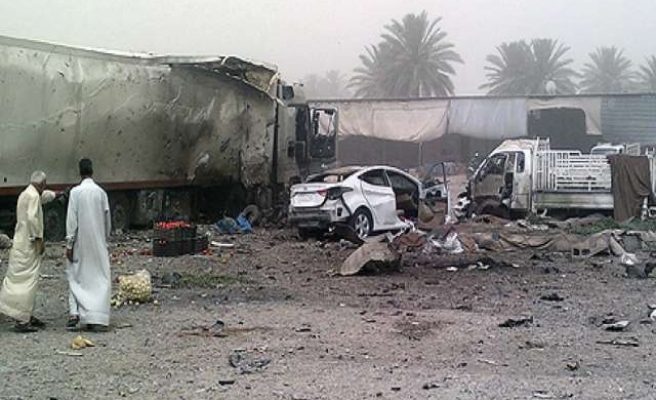 When ISIL fighters tried to storm the Tigris River town of Dhuluiya north of Baghdad this week, they were repelled by a rare coalition of Sunni tribal fighters inside the town and Shi'ites in its sister city Balad on the opposite bank.

The assault, which began late on Tuesday ran into Thursday, was one of several major battles in recent days in which Sunni tribes joined pro-government forces against the militants, in what Baghdad and Washington hope is a sign of increasing cooperation across sectarian lines to save the country.

Further north, another powerful Sunni tribe fought alongside Kurdish forces to drive ISIL fighters from Rabia, a town controlling one of the main border checkpoints used by fighters pouring in from Syria.

In western Iraq, Sunni tribes have fought alongside government troops in Hit, which was captured by ISIL fighters on Thursday, and in Haditha, site of a strategic dam on the Euphrates.

Such local alliances are still rare: in most Sunni areas of Iraq, tribes have shown little sign of turning against militants as they did when they were recruited by U.S. troops in 2006-07. Many of the leaders of that Sunni "Awakening" movement were later arrested by Baghdad, in what Sunnis see as a betrayal.

Sectarian and ethnic animosity runs deep after a decade of civil war that has touched nearly every family, making it difficult for Sunnis, Shi'ites and Kurds to trust each other.

But nearly two months into a U.S.-led bombing campaign, this week's battles have provided the strongest early signs yet of what Washington and Baghdad hope could be a revival of the alliance with tribes to counter ISIL.

"DEFENDING THEIR OWN FAMILIES"

Dhuluiya, which comes from the word "ribs", is a small town surrounded on three sides by a kink in the Tigris. A north-south highway runs through it, making it potentially one of the final stops for fighters attempting to assault Baghdad from the north.

When ISIL fighters arrived in June, members of the al-Jubouri tribe refused their request to hand over 35 local police and security forces officers. Since then, there have been attacks and counter-attacks, while the Sunni tribesmen have been mostly besieged inside the town.

With no way out, they began receiving help from Balad, the mainly Shi'ite sister town on the opposite bank.

"We have no access now except using boats to go to Balad, the only place which helps us. The people of Balad have helped us with food, ammunition, weapons and receiving the wounded," said Abdullah Mohammed, a fighter from the Jubour tribe. "Some of them even fight with us."

The Dhuluiya municipality chief, Turki Khalaf Turki, said the cooperation could be a model for the country: "The starting point of unity in Iraq will be Dhuluiya, which wanted unity, while ISIL wants sedition."

On Tuesday, the fighters launched what appeared to be a coordinated assault to capture the town once and for all. Insurgents flanked Dhuluiya from the eastern and northern sides, using mortars, RPG rounds, machine guns and hand grenades, Colonel Hussein al-Jubouri from Dhuluiya's police force said.

"We were able to stop them and our people have high morale because they are defending their town and families," he told Reuters on Wednesday, adding that the area was being targeted by mortars as they spoke. Nine residents and four fighters died.

Across the river, the insurgents also launched an attack on Balad near a Shi'ite shrine that would have allowed them to complete their siege of Dhuluiya. Abu Gyath, an influential Shi'ite sheikh, said fighters in Balad defended the territory to help the tribesmen across the river.

"If they control this area, God forbid, then Dhuluiya will be suffocated and it will be hard for us to send help. Otherwise, we pledged to help them as they are in a difficult situation," he said.

While such cooperation is rare, it is not unique.

In the north, members of the Shammar tribe helped Kurdish troops known as Peshmerga capture Rabia on Tuesday, the main border crossing between northern Iraq and ISIL-held territory in eastern Syria.

Abdullah Yawar, a leading member of the tribe who long had an acrimonious relationship with Kurds, said he had been negotiating an alliance with Kurdish regional leader Massoud Barzani since ISIL fighters swept into the north's biggest city Mosul in June.

Ahead of this week's Kurdish assault on Rabia, Yawar communicated with people inside the town to tell them that the forces coming to take it were "friendly".

"All of the Shammar are with the Peshmerga, and there is full cooperation between us," he told Reuters after the battle.

In Hit, a Euphrates River town west of Baghdad that fell to the militants on Thursday, the Sunni Albu Nimr tribe has reportedly clashed with the insurgents.

"When we saw ISIL killing civilians, innocent people, destroying houses, they even took some of our men and we don't know their destiny till now," a member of the Albu Nimr tribe who declined to be named told Reuters.

"When we discovered their behaviour and actions against Islamic teachings, we decided to stand against them, and we decided to fight any people standing against the army and the government."

In Haditha, a town by a strategic dam on the Euphrates further west, the Jaghaifi tribe has also allied with the security forces to thwart several attacks by ISIL.

Ehsan al-Shimmeri, a political science professor at the University of Baghdad, said he saw an echo of the 2006-2007 "Awakening" movement.

"I think it represents a big transformation in fighting ISIL at the level of Iraqi society," he said.

In Dhuluiya, al-Jubouri tribal leaders initially hoped to avoid a clash with ISIL when the fighters first stormed the town's outskirts in about 25 vehicles on June 14, four days after capturing Mosul.

The fighters told the townspeople their target was Baghdad and they did not plan to fight for control of Dhuluiya. A policeman recalled them announcing: "We just want to enter the town so that we can announce we've overrun it, put our flags on the buildings and leave."

Tribal leader Sheikh Mohammed Khamees was among a group of representatives of the town who met the fighters. Keen to avoid confrontation, Khamees initially agreed to let them enter.

But when the insurgents demanded the tribes hand over 35 security officers, "the tribe held a meeting, their demands were refused and we raised our weapons against them," Khamees told Reuters. "They said his means declaring war against us."

And so the battles began. On July 5, the militants launched a multi-pronged assault on the town, and exploded a wooden bridge that linked Balad to Dhuluiya. Police say more than 90 people have been killed and more than 400 wounded since June.

The decision by the town's Sunni tribesmen to hold out was praised in a sermon by a representative of Grand Ayatollah Ali Sistani, Iraq's top Shi'ite cleric, who called on the army to help them.

The alliance between Sunni Dhuluiya and Shi'ite Balad has required people in both towns to overcome sectarian animosity built up during a decade of war.

Abu Gyath, the Shi'ite sheikh in Balad who helped rally the town to the defence of Sunnis in Dhuluiya, said Sunni militants shot dead one of his sons in 2008 and another son was killed in a car bombing in 2011. But the arrival of ISIL fighters persuaded him to overcome his animosity towards his Sunni neighbours to confront the bigger threat.

"Yes I wish to retaliate for the killings of my sons. But I feel sad now when I hear that the bombings (by ISIL militants) have targeted any Sunni village," he told Reuters. "Although Balad was targeted a lot in the past, now Balad's people are helping Dhuluiya in this difficult time."

"Continuing this relationship is not easy, it needs time, and some people have to clean their hearts."