Mosul was overrun by militants who have since moved south towards the Iraqi capital, overrunning the city of Tikrit and other towns 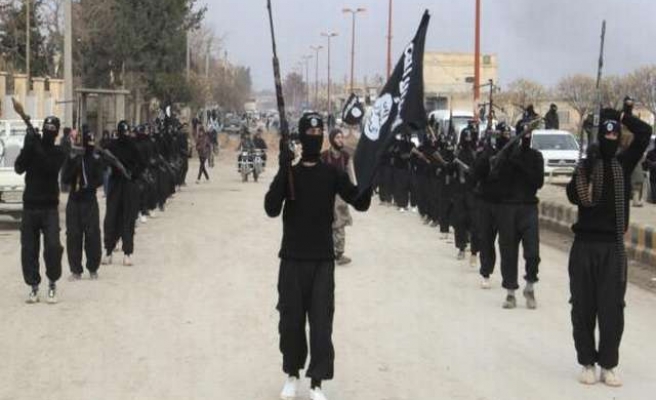 The Iraqi air force bombed insurgent positions in and around the northern city of Mosul on Thursday, footage aired on state television showed.

The Islamic State of Iraq and the Levant -- or ISIL -- has captured another Iraqi city after seizing northern Mosul province on Tuesday, as the group threatens to cement control in central Iraq.

The city of Tikrit, hometown of late president Saddam Hussein, fell to ISIL militants Wednesday afternoon, in less than 48 hours after the capture of Mosul, Iraq's second city.

Tikrit, within Salahuddin province, is only 140 km away from capital Baghdad.

Meanwhile, violence continued in other cities as eleven people were killed in separate incidents in capital Baghdad and Anbar province.

Eyewitnesses told The Anadolu Agency that ISIL militants "took over Tikrit in only a few minutes." They said ISIL militants started firing into the air and broke into the state university.

The private Salahuddin television channel, based in Tikrit, stopped broadcasting.

Earlier in the day police chief Omar al-Jubouri told the AA: "The army withdrew abruptly from Tikrit's entrance, leaving only the police and rapid deployment forces."

On Wednesday, the Iraqi army's 12th division handed over their Kirkuk headquarters to Kurdish Peshmerga forces, deeming them better able to tackle the wave of ISIL aggression.

One military officer told The Anadolu Agency: "They left their headquarters and their weapons to Peshmerga forces because they failed to confront ISIL militants."

Kurdish Peshmerga forces are the army of the autonomous Kurdish region in northern Iraq.

Kirkuk, 236 kilometers north of the capital Baghdad, is an oil-rich city disputed between the central government in Baghdad and the northern Iraqi autonomous Kurdish region.

The Peshmerga also managed to recapture the Iraqi district of Sinus in Baghdad after battling ISIL militants, according to Peshmerga commander Abdul Rehman Qawrini.

"The district of Sinus is now completely under the control of the Peshmerga forces and at least seven ISIL militants were killed and many injured during the clashes," he said.

Seventeen civilians have been found dead near the headquarters of the Iraqi army in the northern city of Mosul, a health worker has told the Anadolu Agency.

The deceased are believed to have been people who were executed by Islamic State of Iraq and the Levant militants when they first seized the city Tuesday.

Waleed Jassim, a medical official at the Republican Hospital in Mosul, said "The bodies belonged to civilians who had been executed earlier and showed signs of gunshot wounds in different parts of the body with cuffed hands."

Some local media reports suggests that the civilians had been held by the Iraqi army, which executed them amid the outbreak of clashes in the city.

The Iraqi government has not commented, and the bodies are still unidentified.

Local media reports also said the ISIL militants set government officials in Mosul a deadline until next Sunday to return to conduct their regular work, threatening "violators" with "severe penalties."

Nine people were killed and twenty-two were wounded in two separate bombings in capital Baghdad.

The first blast in the Sadr region, predominantly Shiite east of the capital, killed four people and wounded nine others.

Another blast targeting a police checkpoint north of Baghdad left five dead and thirteen wounded, according to security sources.

In Anbar province, western Iraq, two women were killed and seven people were wounded in an army shelling in Fallujah, revealed Wissam Issawi, spokesman for the Fallujah General Hospital.

There was no comment from the part of the Iraqi army on the last incident in Fallujah, where the ISIL has held control since early January despite military operations.

More than 15,000 Iraqi civilians have reportedly been killed in clashes between government forces and militant groups in the region since November, 2012, while according to the UN, nearly 9,000 people were killed in 2013 alone, making it the deadliest year for the country in the past five years.

The Islamic State of Iraq and the Levant was established in the early years of the Iraq War, and it pledged allegiance to al-Qaeda in 2004. It is now also operating in Syria. In February 2014, al-Qaeda cut off all ties to ISIL.

Iraq has seen a marked increase in violence in recent months, which the government blames on the ISIL, accusing the group of having links with al-Qaeda.