Incident is believed to have taken place south of Kirkuk in Taza Khurmatu, a Turkmen area 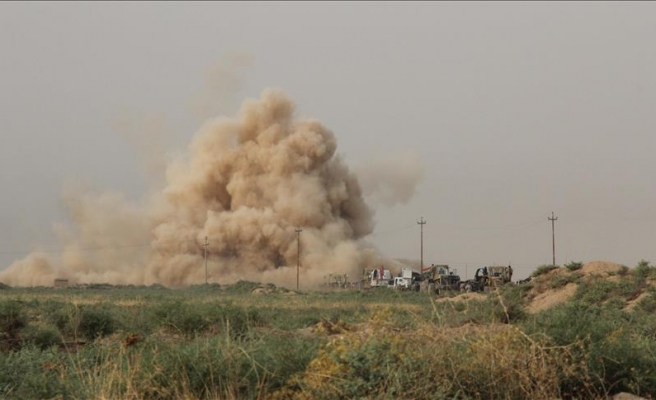 The injury toll in a ISIL suspected toxic attack south of Kirkuk has risen to 670, Iraqi Turkmen Front said in a statement Saturday.

A child also died in the incident, while out of the 670 people injured, seven are said to be in critical condition, who were transferred to medical facilities in Baghdad, the statement added.

“This heinous action is a clear proof that this organization is targeting the presence of Turkmen in Iraqi territories,” it said.

The front urged the central government and the international coalition forces to intervene “immediately and rapidly to liberate the Turkmen village of al-Bashir to avoid the risk of targeting the people in Taza Khurmatu, Turkmen area”.

It also demanded from the “Iraqi Environment Directorate to act urgently and immediately in order to address the environmental pollution as a result of these chemical attacks”.

Abdul Hadi Mohan, member of a health and environment committee at the Iraqi parliament, said Friday: "The first death [took place] as a result of the attack of ISIL last Tuesday evening in the area of Taza Khurmatu, to the south of Kirkuk province, by missiles carrying toxic gases; it also wounded more than 400 people".

Torhan al-Mufti, higher coordination committee secretary in the Iraqi Council of Ministers, said Saturday that a delegation of Taza Khurmatu met Iraqi Prime Minister Haider al-Abadi and discussed the security situation of the area in the aftermath of the toxic gas attack.