Any agreement would still need to be approved by Iraq's parliament, where some of Maliki's allies have rejected any continued presence of U.S. troops in Iraq. 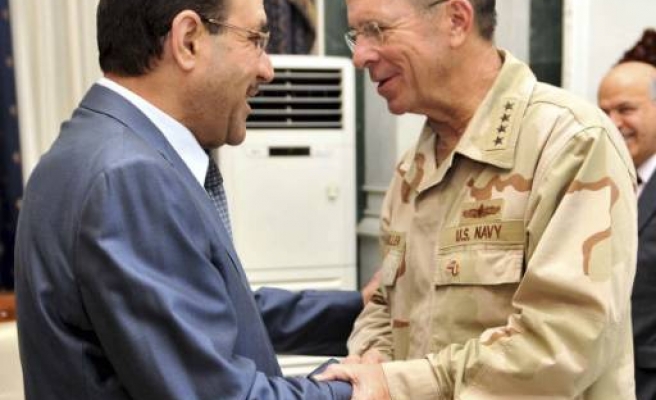 Iraq's political leaders agreed on Tuesday to allow Prime Minister Nuri al-Maliki to negotiate with the United States over whether U.S. troops should stay to train Iraqi forces past a year-end deadline for American soldiers to leave.

The agreement edges Iraq a step closer to deciding if some U.S. soldiers will remain, but a final deal is distant as tough questions remain on whether trainers are civilian contractors or active U.S troops and over their legal immunity in Iraq.

More than eight years after the U.S.-led invasion that toppled former president Saddam Hussein, the remaining 46,000 U.S. troops in Iraq are scheduled to leave at year-end when a bilateral security agreement finishes.

Leaders from Iraq's major parties met on Tuesday to discuss U.S. troops just hours after the top U.S. military officer visiting Baghdad said any accord for a U.S. presence would require lawmakers to give Americans soldiers legal immunity.

"The leaders agreed to authorize the Iraqi government to start the talks with the United States that are limited to training issues," the parties said in a joint statement.

A U.S. embassy official said they were reviewing the decision.

Any agreement would still need to be approved by Iraq's parliament, where some of Maliki's allies have rejected any continued presence of U.S. troops in Iraq.

The issue is putting pressure on the fragile multi-sectarian alliance of Sunni, Shi'ite and Kurdish blocs and risks upsetting Moqtada al-Sadr, whose Shi'ite militia once fought U.S. troops but whose political movement is now a Maliki ally.

Sadr representatives refused to vote to approve the talks on training, Iraqi President Jalal Talabani said after the meeting.

Abbas al-Bayati, a member of National Alliance Shi'ite parliamentary bloc and the parliamentary committee of security and defence, said it was too early to decide on the issue of immunity.