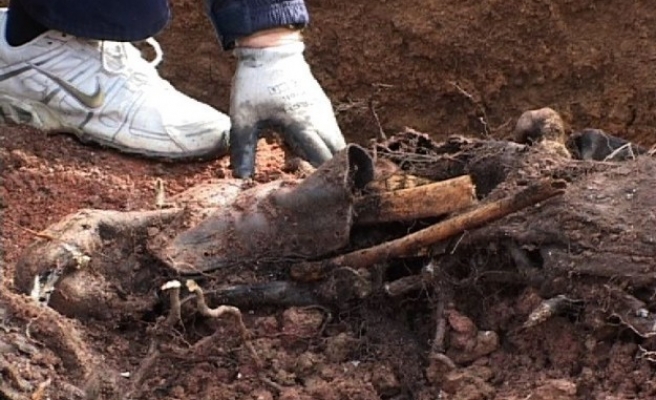 Iraqi forces have discovered a mass grave -- which appears to contain the remains of slain army and police personnel -- in the northern Kirkuk province, the Iraqi Defense Ministry said Saturday.

"A mass grave was discovered that appears to contain the remains of some 50 army and police personnel killed by ISIL terrorists in the village of Al-Bakara in Kirkuk’s Hawija district," the ministry said in a statement.

“The grave will be excavated -- and the remains examined -- in accordance with proper legal procedures,” it added.

Earlier this year, army sources said security forces had stumbled upon two mass graves containing the remains of dozens of members of the Iraqi army and police who had been killed by ISIL in Hawija.

On Oct. 8, Iraqi forces announced the recapture of Hawija, which had been one of the terrorist group's last remaining strongholds in the country.

Hamed al-Obaidi, a Kirkuk police captain, told Anadolu Agency that security forces had been tasked with investigating mass graves found in the district.

According to al-Obaidi, the fate of “dozens” of Iraqi military personnel had remained unknown since mid-2014, when ISIL overran vast territories in both Iraq and Syria.

In recent months, however, ISIL has suffered a string of major defeats at the hands of the Iraqi military and a U.S.-led coalition.

In August, the group lost Tal Afar in Iraq’s northern Nineveh province. And one month earlier, the city of Mosul -- once the capital of ISIL’s self-proclaimed “caliphate” -- fell to the army after a nine-month siege.