Masoud Barzani, the president of Iraqi Kurdistan, said the Kurds needed more than the humanitarian aid that Germany began sending 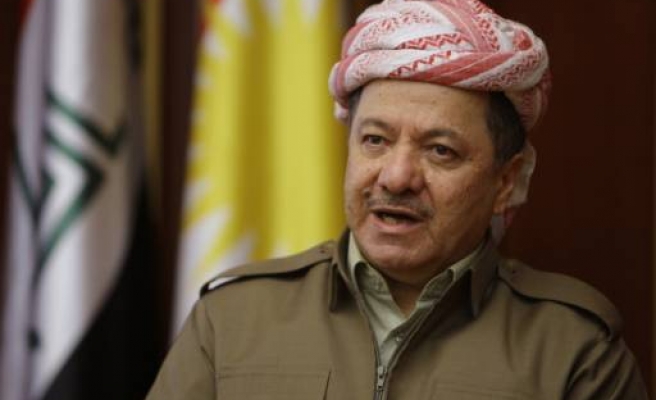 The leader of Iraq's Kurds appealed to Germany for weapons to help Kurdish fighters battling militants of the ISIL, and said foreign powers must find a way to cut off the group's funding.

The European Union on Friday gave a green light to EU governments to supply arms and ammunition to the Kurds if it has the consent of the government in Baghdad.

Germany has shied away from direct involvement in military conflicts for much of the post-war era and a survey conducted for Bild am Sonntag newspaper indicated that almost three quarters of Germans were against shipping weapons to the Kurds.

But Germany's defence minister has said the government was looking into the possibility of delivering military hardware.

Masoud Barzani, the president of Iraqi Kurdistan, said the Kurds needed more than the humanitarian aid that Germany began sending on Friday to support people forced to flee their homes by the Sunni militant group's advance.

"We also expect Germany to deliver weapons and ammunition to our army so that we can fight back against the ISIL terrorists," Barzani told German magazine Focus. He said they needed German training and what they lacked most were anti-tank weapons.

German Defence Minister Ursula von der Leyen sought to temper Kurdish expectations, saying on Friday that forces in Iraq were trained on Soviet-designed weapons that Germany did not have and could not deliver.

But Foreign Minister Frank-Walter Steinmeier held out the possibility of sending more than humanitarian help. He said Barzani had made clear to him in Iraq on Saturday that Kurdish fighters did not always have the necessary equipment to defend themselves.

Speaking in the Kurdish regional capital Arbil, Steinmeier reiterated his view that Germany should go to the "the limits of what is politically and legally doable" to help the Kurds, adding each EU country had to decide itself what to contribute.

He said Germany would provide more than 24 million euros' worth of humanitarian aid and added his visit was intended as "a signal of support and that you won't be left alone in this difficult situation."

In an interview with German broadcaster ARD Steinmeier said the government would "look at the Kurds' wishes very closely when I get back to Berlin and then make a responsible decision".

Earlier on Saturday, while in Baghdad, he had described the ISIL as "a terrorist murder gang" and said he feared "the last anchors of stability in Iraq could fall".

He said the nomination of Haider al-Abadi as Iraq's prime minister-designate this week was a "small ray of hope" as it made it more possible to form a government that represents all of Iraq's regions and religious sects.

Barzani said foreign governments had to find a way to choke off ISIL's sources of funding.

"A grand alliance must drain the ISIL's financial sources and prevent individuals from aligning themselves with the group," he said.

"The first source of ISIL's income was the oilfields in Syria. Later they stole more than $1 billion from state banks in Mosul and Tikrit. They also got financial support from several other countries and donors."

He estimated that the ISIL took in $3 million every day via compulsory levies and oil theft.