The United Kalavrvta tanker, carrying about $100 million worth of Kurdish crude, has been anchored in the Gulf of Mexico for weeks 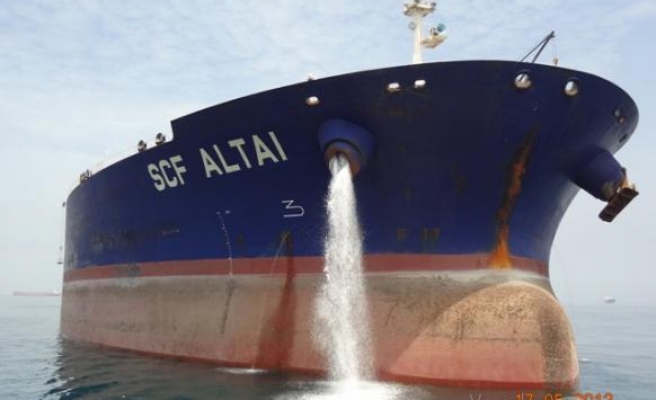 Iraqi Kurdistan has shipped over 8 million barrels of oil from the Turkish port of Ceyhan since May, sources and energy officials said, as the autonomous region employs new tactics to establish independent oil sales in defiance of Baghdad.

The 11th tanker sailed from the port on Thursday, a Turkish official said, with the Kurdistan Regional Government now using a number of smaller tankers as well as its original 1 million barrel carriers to evade Baghdad's efforts to block the sales.

"The latest tanker carrying 250,000 barrels has just departed Ceyhan and the total amount shipped through the port has exceeded 8 million barrels," a Turkish official said.

The latest shipments are likely to further infuriate Baghdad, which disputes the autonomous region's right to export oil independently of central government. Total shipments of more than 8 million barrels are much higher than previously reported.

A senior KRG official in the regional capital Arbil said last week it may quietly shift towards smaller vessels from the 1 million barrel cargoes it has previously been sending.

Baghdad's persistent efforts to block sales have deterred some customers, though the number of cargoes finding buyers has also been increasing, with at least four delivered so far.

"So they will start exporting in smaller amounts, and with smaller tankers."

Turkish officials did not disclose the latest tanker's name and said they were not informed about the buyer, but added that oil pumping and exports have continued with no issues.

"The eleventh cargo has departed. There seems to be a regular book (of orders) in the making," one industry source close to the matter said.

Tanker tracking on Reuters showed four vessels in and around the port of Ceyhan, including the Dynasty Aframax tanker and the larger United Carrier Suezmax tanker. The United Carrier is managed by the same Greek shipper the KRG has used for previous sales.

The Kurdistan Regional Government (KRG) began exporting oil in May via its independent pipeline, which links to the federal Iraqi pipeline at the Turkish border.

The Kurds have claimed the right to sell oil under Iraq's constitution, saying control over natural resources is key for their dream of independence and because Baghdad has responded weakly to Islamist militants who have overrun parts of the country.

Oil revenue is more important than ever for the KRG, particularly after Islamic State militants have advanced as near as 35 km (22 miles) west of Kurdish capital Arbil, causing alarm in Baghdad and drawing the first U.S. military air strikes since the withdrawal of American troops in 2011.

The Sunni militants' advance towards Arbil, which followed the swift seizure of Iraq's third biggest city Mosul in June, has stunned the international community and prompted Western oil companies including ExxonMobil and Chevron to evacuate staff.

But oil output from Iraqi Kurdistan, with the largest producing fields like Taq Taq miles away from the fighting, has largely been preserved and in some cases even increased.

"The pipeline is pumping at 180,000 bpd currently. It's not a capacity issue, but the KRG has chosen to pump at this level. Soon, this is planned to be increased to 200,000 bpd and more," one source close to the matter said.

Following upgrade work in the pipeline, pumping increased last week, from 120,000 bpd previously, despite Arbil and Baghdad still being locked in litigation, both in the United States and in Iraq, over who can sell the crude.

The KRG has said it plans to increase oil sales to around 1 million bpd by the end of 2015, which could give it enough economic clout to speed a move to independence.

Two tankers of Kurdish crude remain in limbo, with one anchored off the coast of Morocco for around three months while another has been sitting off the Texas coast for weeks.

A U.S. court on Monday threw out an order to seize the 1 million barrel cargo from the United Kalavrvta tanker, after acknowledging it lacked jurisdiction because the ship is beyond U.S. territorial waters.

The Iraqi oil ministry said on Thursday it would challenge a U.S. court decision that stopped U.S. Marshals from seizing some one million barrels of disputed Kurdish oil docked near Texas.

"The ministry of oil is emphasising that it is preparing the amended request and will forward it in the required period," the oil ministry said in a statement.

"The decision of the court is only to lift the seizure of the shipment while at sea. Therefore they referred to American maritime law. This doesn't exempt (the oil) from any seizure decision when it arrives on American soil."

The United Kalavrvta tanker, carrying about $100 million worth of Kurdish crude, has been anchored in the Gulf of Mexico for weeks, with the Iraqi region of Kurdistan locked in a legal battle over ownership with the central government of Iraq.

At the request of Baghdad, the U.S. District Court for the Southern District of Texas in July ordered the U.S. Marshals Service to take control of the cargo, part of a broader strategy by Iraq to push back against Kurdish exports.

But a few days later the court said it lacked jurisdiction to carry out the seizure as the tanker was about 60 miles offshore. That prompted the Kurds to file a request to overturn the order.

U.S. refiner LyondellBasell has said it had recently bought cargoes of Iraqi Kurdistan crude for its Houston refinery, but said it would halt future purchases and not accept any deliveries until the dispute was settled.

The company did not explicitly say if it had agreed to buy the crude on the United Kalavrvta, and it is not clear if it might now accept delivery of the cargo.